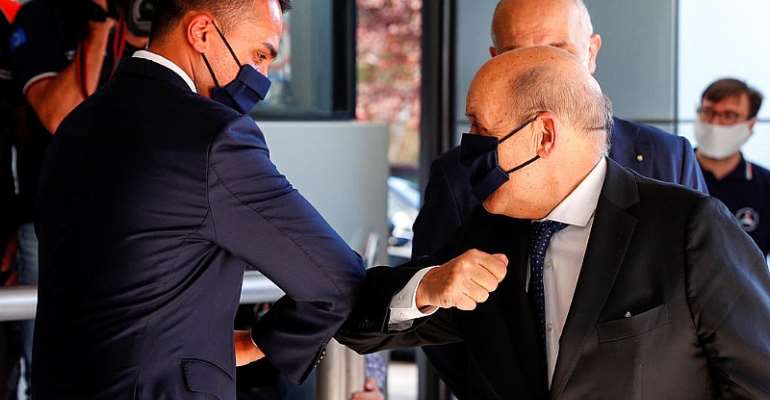 France's Foreign Affairs Minister Jean-Yves Le Drian kicked off a two-day visit to Italy for a follow-up of February's Franco-Italian summit, dominated by the coronavirus pandemic. The key issues this time: the Sahel crisis, the Islamic State group and Libya, which remains a thorny topic between the allies.

Jean-Yves Le Drian greeted his counterpart Luigi Di Maio in Rome with an elbow bump instead of a handshake, in a sign of the new post-Covid times.

While a lot may have changed in four months since the last Franco-Italian summit, the objectives have not. France is keen to consolidate a new "relationship of trust" with Italy, President Emmanuel Macron said in February when he met with Prime Minister Giuseppe Conte.

The foreign affairs minister embarked on his first post-Covid mission on Wednesday with that same message, and also one of solidarity.

"In Rome with my counterpart Luigi Di Maio, to express France's solidarity with its Italian friends," he tweeted in reference to the country's high death-toll of coronavirus victims.

Many Italians have expressed feeling abandoned by the European Union and recent polls show that 49 percent of them are in favour of an "Italexit" – following in the UK's footsteps by divorcing the EU.

This perceived lack of solidarity has cast doubt over Italy's role in the Europe, and may give a boost to Franco-Italian ties, some experts reckon.

"There were some very tough times," says Mitchell Belfer, president of the Euro-Gulf Information Centre in Rome.

"Once Europe started to shut down and the lockdowns took effect, there was a growing suspicion of one another and borders were closed," he told RFI.

Italy, the initial European epicentre of the Covid-19 pandemic, on Wednesday reopened its borders to European travellers. But Foreign Minister Di Maio hit out at neighbours Switzerland and Austria for keeping their doors shut.

The question of borders was on the agenda for Di Maio and Le Drian, as well as their own relationship.

Their diplomatic relations hit rock bottom at the height of the Yellow Vest crisis in February 2019, when Di Maio, who comes from the populist Five Star movement, met with the gilet jaune protesters, prompting France to recall its ambassador.

It is however, the Libya crisis which has crystallised tensions between them.

Today, "I think that both Italy and France have a renewed interest in trying to better coordinate their activities," says Belfer. "If you don't get these two NATO members – who are actively financing opposing sides in Libya – on the same page, you'll never find a solution."

Italy and France have both given diplomatic support to the United Nations-recognised Government of National Accord (GNA) led by Fayez al-Sarraj. However, there have been reports that France is also providing renegade military commander Khalifa Haftar with military support.

The changing nature of the conflict however could force them to see eye to eye.

"Turkey and Russia are pushing and going very fast, maybe faster than Italy and France in terms of stabilising Libya," comments Emmanuel Dupuy, president of the Institute of European Perspective & Security Studies (IPSE) in Paris.

Indeed, Turkish troops were deployed to Libya in January this year to shore up al-Sarraj's Islamist government.

And Paris and Rome will not want to be pushed aside by the newcomers, Dupuy told RFI.

"After losing in Syria, Turkey redeployed fighters from there to Tripoli, internationalising the conflict," Belfer adds, amid fears that Libya could become another Syria, as more foreign actors jostle for influence.

"And you're still getting massive amounts of arms being sent there," Belfer points out, despite a recent EU operation to enforce a UN arms embargo.

The operation called Irini, named after the Greek goddess of peace, is of crucial importance, says Dupuy, even if it is yet to be fully implemented.

"It shows that the European Union must be part of the solution in Libya and included in the France-Italy relationship."

Cooperation was likely to extend also to the fight against terrorism in the Sahel.

"Italy has promised to send 470 Italian soldiers to Niger to back up the Barkhane operation," continues Dupuy. "This will be on the table since these troops have not yet been sent to the Sahel."

Terror groups continue to operate in the region despite Covid-19. Experts say the pandemic has allowed groups such as Al-Qaeda's Jama'at Nasr al-Islam wal Muslimin (JNIM) and the Islamic State in the Greater Sahara (ISGS) to exploit the vulnerabilities of local communities affected by the virus.

Last month, the Islamic State armed group called the coronavirus a punishment from God against its enemies. It has begun stepping up attacks in Iraq, as it moves out of Syria.

The IS subject dominated a video conference of foreign ministers, including Le Drian and Di Maio, as they sought to take stock of The Global Coalition to Defeat ISIS's progress.

“We have made enormous progress," Nato Secretary General Jens Stoltenberg said. "Daesh has lost control of the territories it once held; but the threat of terrorism remains.”