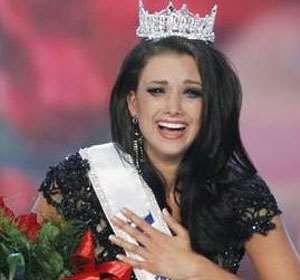 Twenty-three-year-old Laura Kaeppeler became the second Miss Wisconsin to ever win the crown after building her platform around helping children with incarcerated parents.

Soaring through the talent competition with an Opera performance, Kaeppeler also survived the swimsuit portion, sporting a white bikini.

Sealing her win during the question and answer round, Laura Kaeppeler said that Miss America should not reveal her political affiliation. Just like politicians, “Miss America needs to represent all,” Kaeppeler said.

The beauty queen also revealed that her father spent 18 months in prison following mail fraud charges while she was in college. CBS News http://www.cbsnews.com/8301-31749_162-57359505-10391698/miss-wisconsin-makes-fathers-prison-time-a-miss-america-platform/ reports Kaeppeler wants “children of incarcerated adults to feel less alone, to have mentoring and to pursue as much of a relationship with their parents as possible.”

“There are many of you out there and I was one of them but it doesn't have to define you,” Kaeppeler said in an interview with The Associated Press http://www.google.com/hostednews/ap/article/ALeqM5hBcBa1U3uu8ZxuWIXEFISuUWDDoQ?docId=3b7a61ad27ae49748fb2d657187b002b on Saturday.

Father Jeff Kaeppeler said deciding to talk publicly about his incarceration was a difficult, but important family decision. “It taught us that God can turn anything into good if you let him,” he said in a backstage interview with The Associated Press. “Laura is totally on board with that idea. She let that drive her and inspire her this past year to get ready for this.”

With her $50,000 winnings, Kaeppeler is planning on going to law school to help children of incarcerated adults. Over the next year she also plans to focus on the importance of education.