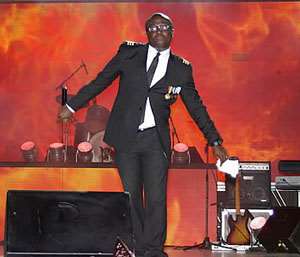 One of the country's finest radio presenters, Nat Kwabena Adisi aka Bola Ray, made history when he thrilled patrons of the 'Joy FM Nite With The Stars' with his azonto moves.

The event was held at the Accra International Conference Centre over the weekend.

Bola Ray, who was the MC for the event, took the audience through some of the latest azonto dance steps.

His azonto moves were so infectious that he got others to also show off theirs.

Bola Ray proved to music fans that apart from being a radio presenter and 'Drive Time' host on Joy FM , he was also a good dancer.

Based on his outstanding achievements, Bola Ray was recently awarded Ghana's Showbiz Personality of the Year at the City People Awards for excellence at the Balmoral Event Centre in Oregun, Lagos.

Bola Ray, who also doubles as the CEO of Empire Entertainment, has contributed a lot towards building a vibrant music industry in Ghana.

This year's Joy FM Nite with the Stars was a fun-packed night that saw some big names such as Obrafour, T-Blaze, Bradez, Buk Bak, Okyeame, Samini, Kokovelli, K.K. Fosu, Kofi Nti, K.K. Fosu, Ofori Amponsah, Castro and Yaw Siki taking turns to dish out hit after hit to the audience.