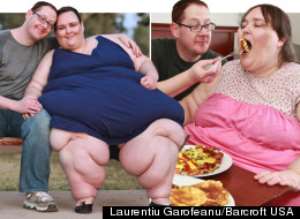 The American mother-of-two who aims to become the world's fattest woman has found love - with a chef.

Susanne Eman, 33, who weighs over 54 stone wants to double her weight to hit over 115 stone. Now she's found a partner to help her in her bid, 35-year-old chef Parker Clack.

The two plan to marry with Eman saying they are a "match made in heaven": "I love eating and Parker loves cooking."

Clack moved in with Eman, who describes herself as "your average gal next door who just happens to have a body to match the size of her personality" after the two met online.

"It's a perfect pairing. I still want to be the fattest woman in the world and Parker is fine with that. He loves larger women and sees how happy I am when I'm eating.

"His cooking skills were definitely part of the attraction. How could I resist a man with talents in the kitchen?" the besotted mother-of-two said.

Her husband-to-be said he was concerned about his "beautiful" fiancee's health but tried to make sure she ate and did exercise.

Eman eats over 20,000 calories a day and has modelled for super size websites.

"She's taken up swimming since we met and we love to swim together."

Registrar Of Volta Regional House Of Chiefs Reacts To Allega...
9 minutes ago