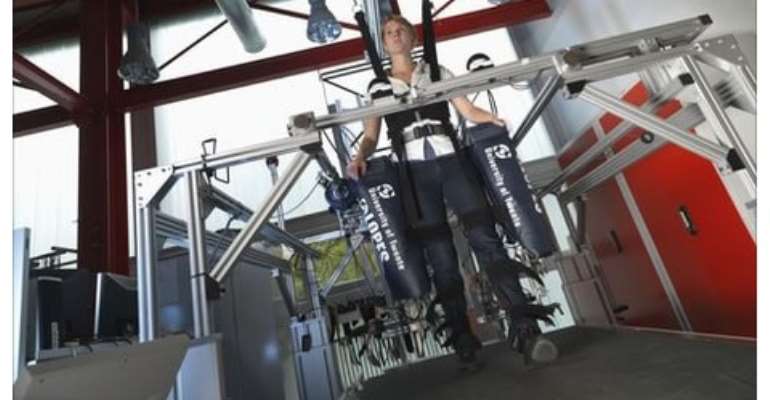 Scientists in the Netherlands are using robotic legs to try and improve the movement of stroke patients.

The prototype device is called the Lower-extremity Powered ExoSkeleton, or LOPES, and works by training the body and mind of a patient to recover a more natural step.

The machine is also being tested on spinal injury patients who have recovered some restricted movement in their legs.

It is hoped a commercial version could be made available to rehabilitation centres around the world as early as next year.

Feedback mechanism
LOPES has been developed by engineers at the University of Twente in Enschede in the Netherlands over several years. Designed for the rehabilitation clinic, it is not a mobile device but supports the patient as they walk on a treadmill.

It can do all the walking for the patient, or it can offer targeted support in either one leg or with one element of the walking process. The machine can also detect what the patient is doing wrong.

"For instance, some people cannot lift their foot up appropriately," explains Dr Edwin van Asseldonk, who is working on the project. "What this device does is it senses that the foot is not lifting properly.

"It then compares it with a reference pattern and then exerts a force or torque to assist that subject in doing it."

Petra Hes is one of those testing the device. She suffered a stroke aged just 17. Years of physiotherapy have helped, but she still has what is known as a "drop foot", which means she cannot lift and flex her left foot in the way she once did, or even remember how to do so.

The machine provides the forces to enable her to physically move her left leg and foot the way it should move, but it also operates as a memory aid, the researchers believe.

"I got a eureka moment because I felt an old feeling of how to walk normally," she recalls of the first time she used the machine.

"That push-up I felt and my knee lifting it is what I've forgotten. I couldn't reproduce it myself so I had to feel it again."

Dr van Assledonk believes that by physically showing patients how to walk properly, the machine can help them develop the brain signals required to drive improved movement.

"With stroke survivors, it's very important that they get signals to the brain but also that they send signals downwards from the brain," he says.

"It's only when you get information from your legs to your brain and vice-versa that can you hope for some plasticity in your brain."

Dr Sharlin Ahmed from The Stroke Association in the UK hopes the innovation will help.

Military exoskeletons
Work on a commercial version of the LOPES machine is already under way, with two private companies co-operating on the project. Two rehabilitation centres in the Netherlands will then test the device before it is rolled out to other clinics at home and abroad.

The LOPES project is by no means the only example of scientists turning to "exoskeletons" to aid human performance.

Berkeley Bionics of California has designed an exoskeleton called the Human Universal Load Carrier (HULC). The device enables infantry soldiers to lift and carry weights of up to 90kg in the field, and consists of a hydraulic-powered frame which straps around the soldier's body.

The same company has also developed an exoskelton called "eLegs". Billed as an alternative to the wheelchair for those with restricted mobility, the frame can help users to walk upright with the aid of sticks.

"I foresee that older people in the future might just wear an exoskelton when they're going around so they can keep pace with the grandchildren.

"You can imagine devices like this could keep people mobile for longer."