Santrofi to share stage with Erykah Badu on Europe tour 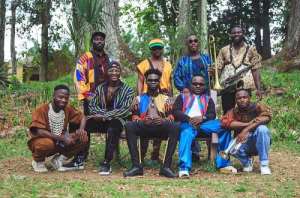 Undisputedly declared as the game changer in the Ghanaian Highlife music genre, Santrofi is set to perform in over 40 shows at major festivals and concerts in Europe.

In one of the epic concerts, “Down the Rabbit Hole”, a 3-day multi-genre classic outdoor music festival in the Netherlands, Santrofi will share the stage with top-ranking musicians such as Erykah Badu, one of the world’s most gifted rhythms and blues singer from the United States.

The Ghana-based international vintage-inspired Highlife, Afrobeat and Funk band are sending their unique sound to Europe after revealing they will be playing at major concerts and festivals between May and July 2022.

The tour promises to be a spectacular experience. Santrofi will play their best-loved mega-hits such as Alewa, Africa, Adwuma, Cocoase, Kwabena Amoah and Kwaa Kwaa. They will showcase their amazing musicianship, showmanship and humour and a surprise or two along the way.

The organisers have described some concerts as the “ultimate celebration of freedom” after COVID-19 lockdown.

The band leader, Emmanuel Ofori, has said “Nothing is as exciting as playing live and we can’t wait to perform in front of our fans, we’ve missed you all so much! We’re going to bring festival vibes and hands-in-the-air positivity, bring on the summer of fun!”

He added, “We are more ready than ever to unleash the ultimate summer party! With live music officially back on what could be better than sizzling performances from the feel-good masters of Highlife and Afrobeat. Attendees can expect a full-on festival atmosphere with one of the best live bands around!”

The band is fronted by vocalist, bassist and founding leader Emmanuel Ofori and backed by a seven-piece band consisting of Robert Koomson (a.k.a Nsoroma) – lead vocals, talking drum, guitar; Bernard Gyamfi on trombone and shekere; Norbert Wonkyi on trumpet, flugelhorn and bell; Prince Larbi on drums and vocals; Emmanuel Boakye Agyeman on keyboards and vocals; and Emmanuel Blankson on percussion.

The fans and good music lovers won’t want to be anywhere else!