What Stonebwoy's kids did to his statue will shock you 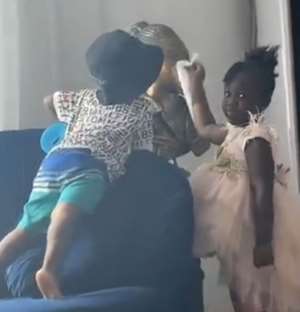 A recent video of what Reggae Dancehall artist Stonebwoy' kids, Janam and Jidula Satsekla are doing to his statue has rocked social media and netizens are talking.

In the video, the kids are seen cleaning the statue of the Dancehall as their mother secretly captures them in a video.

Initially, the kids were seen wiping the nostrils of the statue with handkerchief.

Speaking to the statue as though it was their father himself, Jidula, the elderly daughter is seen asking it to blow its nostrils harder while Janam the youngest stands by.

Check out the video of the kids 'thoroughly ' cleaning their father's statue.

Hottest Photo Reports
Catch up with all the political quotes from our politicians.
Advertise here
More Celebrity
ModernGhana Links
I haven't found the right man — Songstress Asa reveals why she is single at age 39
Check out rapper Kendrick Lamar's eventful weekend in Ghana
I am worth about 1 million dollars - Tracey Boakye reveals
Cows defecated on me, the rains beat me — Sherifa Gunu shares painful journey to Accra in truck transporting cows
I wanted to be a lawyer growing up — Jackie Appiah reveals
I charge $30k to go on dates — Princess Shyngle
Jesus and my doctors helped me with my enhanced body — Tonto Dikeh reveals
I spend GHc2k on just dresses when I'm booked for events — S3fa
I left to study degree in Business Management in UK — Sony Achiba reveals
TOP STORIES