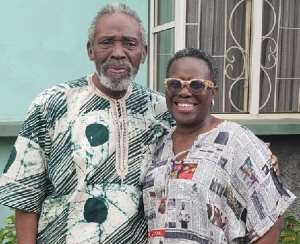 The wife of the actor, Joke Silva, says her husband is alive and well.

The reaction came after social media was awash with rumours of the death of the man who will turn a year older next month.

Joke, who is also an actress, described the unfortunate news in circulation as depressing to her family, according to The Guardian Nigeria report.

She further stated that the family had been getting calls from friends and associates who had wanted to know if the report was true.

Prior to her reaction, Lala Akindoju, another actress who is a family friend to couple, debunked the death claims, saying the veteran actor is doing fine.

In a tweet, Akindoju warned Nigerians from peddling fake news as she said she spoke with Jacobs and he is “alive and well.”