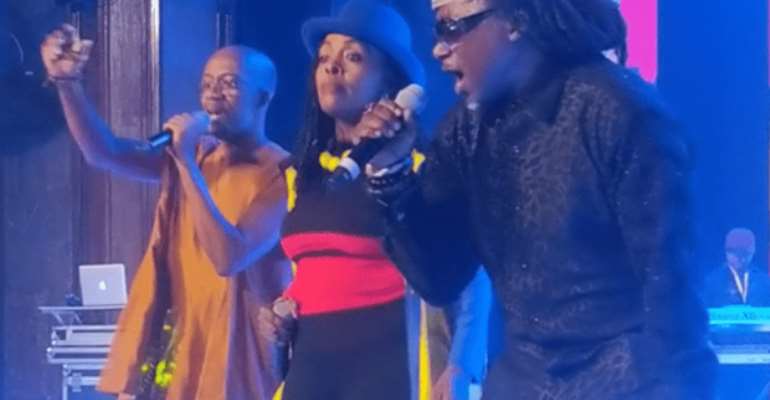 The event was organized by Slip Entertainment to celebrate the 63rd Independence Day celebration as well as promote Ghanaian highlife music.

The three acts who were former members of NAKOREX left no stone unturned at the show as they gave out hits in continuity to thrill their fans at the event.

They delighted music fans with some of their hit songs, which were embedded in the hearts of Ghanaians.

The three highlife musicians were consistent and controlled the crowd who screamed to show their excitement about their stagecraft and dancing skills.

They expressed their love for music throughout their stage performance.

Apart from exhibiting their usual vocal abilities and dancing skills, they got fans singing along when they performed most of their various hit songs.

Akosua Agyepong is among a few female musicians who at the peak of their career gave their male counterparts in the Ghanaian highlife music scene a good run for their money.

She is an evergreen highlife musician whose excellence seems never to fade away.

With a number of albums to her credit, Akosua is still one of the country's show stoppers and never fails to deliver whenever she is called upon.

Radio presenters such as Merqury Quaye, Geroge Addo Jnr. and Doreen Avio were the MCs for the night.