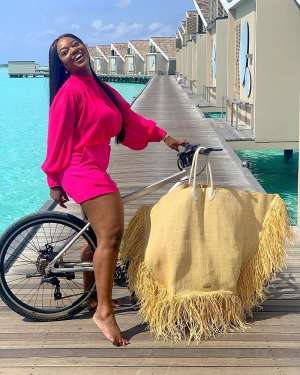 The African actress who is undoubtedly one of the favourite celebrities in the continent has admirers all over the world.

Instagram (also known as IG or Insta[9]) is a photo and video-sharing social networking service owned by Facebook, Inc. It was created by Kevin Systromand Mike Krieger, and launched in October 2010 exclusively on iOS. A version for Android devices was released a year and half later, in April 2012, followed by a feature-limited website interface in November 2012, and apps for Windows 10 Mobile and Windows 10 in April 2016 and October 2016 respectively.

According to Attractivemustapha.com, Jackie Appiah with 6M followers is following 190 Instagram accounts and has made 761 posts at the time filing this story.

Jackie Appiah is a Ghanaian actress who was born on December 5, 1983 in Canada as the last of five children.

She is widely recognized as one of the best African Actress of her generation.

She made her debut in the movie industry in the movie, Divine Love, in 2004, alongside Van Vicker and Majid Michel. The film was produced by Venus Film.

Jackie has many awards, including Africa Movie Academy Awards (AMAA) in 2007 and 2010 and multiple Ghana Movie Award wins.

Some of the top movies she has acted in include Perfect Picture, The Heart of Men, Run Baby Run, A Cry For Justice, The Last Wedding, Night Wedding, Wrath of a Woman and Stigma