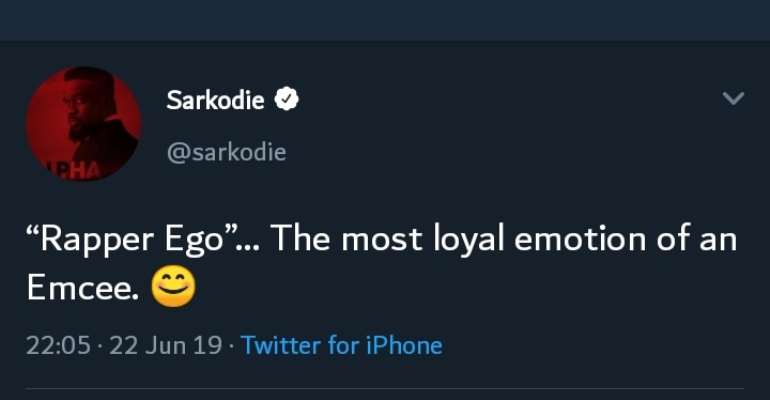 The Ghana Music industry and Social media has been buzzing for two days following the hot exchanges between two celebrated young Artists in Ghana.

Former signee of Sarkcess music, Strongman and AMG rapper, Medikal have both released tracks jabbing eachother over supremacy in the rap industry.

Although followers of the two are having mixed reaction on social media, the Chief Executive Officer of Sarkcess Music, Sarkodie has finally tweeted on the on-going 'beef' between his former signee and the AMG rapper.

Known in real life as Michael Kwesi Owusu, the celebrated Rapper in a tweet posted "Rapper Ego”... The most loyal emotion of an Emcee."

Although most followers have read various meanings to his tweet whiles others are asking 'The King' to explain it further, it is unclear what Sarkodie's tweet means.

Sarkcess Music signed the Rapper, Strongman onto his label few years ago but the young champ exited after some time.

Medikal started this beef when he released 'To whom it may concern' in which its lyrics reveals he saved the music industry for 4 years. This infuriated Strongman who also released a diss song titled 'Don't Try,' telling Medikal to subtract his fraud money from his real money, the rest is his music money of which it can't buy him a bicycle.

Medikal later rebated with 'The Last Burial'. ModernGhana understands that the lyrics in the 5 minutes diss track went too personal.

The lyrics from Medikal furthered angered Strongman who on Sunday released a much deeper personal diss track in which it's lyrics had a verse comparing Actress Fella Makafui and Sister Derby. He also used the platform to hype his girlfriend 'Nana Ama'.

Strongman also countered with the latest diss track called '#UpsAndDowns' which features godMC, M.anifest, another beef maker who took on with the Stongman's former boss, Sarkodie on similar issue.