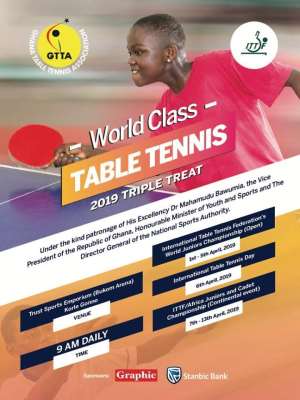 Mr. Mawuko Afadzinu, President of the Ghana Table Tennis Association (GTTA) says his Association is ready to make Ghana proud, as hosts of the upcoming 2019 World and Africa table tennis championships in the country.

He said over 20 countries have confirmed their participation in the tournament to be held in Ghana.

"The LOC has put in place all the necessary arrangements for all participating countries to feel comfortable."

He said the government of Ghana had shown immense commitment towards the success of the tournament, adding that, the Association was grateful to the government.

He noted that the tournament would give more local tennis players the needed exposure for future events, because as many of them as possible would get the opportunity to play.

He said the primary focus was to make sure that a lot of the junior athletes play in the tournament and would also seize the opportunity to build interest in the sport across the country.

The WJC is one of the ITTF junior circuits, where players across the globe amass points to qualify for the end-of-the-year World Junior Finals, while the AYJCC is Africa’s qualifiers for the World Junior Championship as well as a platform to select African team for the World Cadet Challenge.

Ghana last hosted a major event in table tennis in 2004, when the nation hosted the African Junior and Cadet Championships.