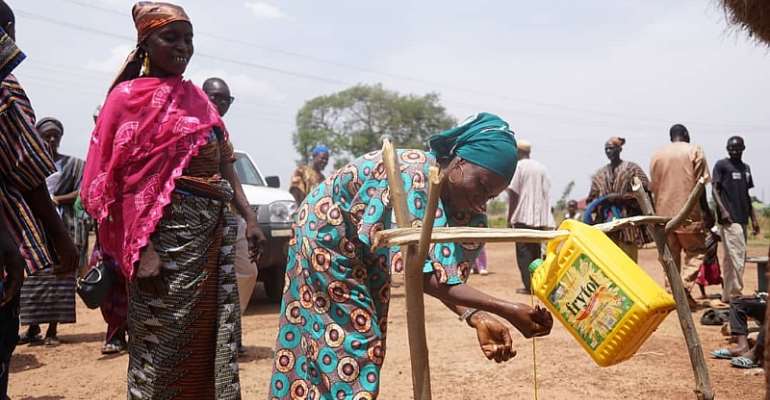 Tamale, March 31, some residents of Gunayili and Kamonayili in Tamale and Sagnarigu Assemblies respectively have been sensitised to use tippy taps for effective hand washing to help prevent any outbeak of the COVID-19 in the area.

Some youth in the two communities were also trained on how to install tippy taps so that they would also teach others in the communities in the bit to facilitate hand washing under running water.

New Energy, a non-governmental organisation operating in the water, sanitation and hygiene sector, undertook this initiative in the two communities to contribute to national efforts at suppressing the spread of COVID-19 in the country.

Mrs Nayilatu Iddrisu, Executive Director of New Energy, who led a team to visit some homes in the communities to undertake the initiative, said the materials needed to install tippy taps were readily available in the communities.

Tippy tap is a hands-free device for hand washing that is especially designed for rural areas where there is no running water.

It is operated by a foot lever and thus reduces the chance for the transmission of pathogens as the user only touches a bar of soap suspended by a string.

Mrs Iddrisu said it cost less than GHc3 to fix tippy taps compared to Veronica Buckets, which most of the rural dwellers could not afford hence the decision to promote them for use by rural dwellers to keep them safe during this period of COVID-19 pandemic.

She said it was also more hygienic to use tippy tap as it was hands-free, which helped to prevent contamination compared to Veronica Buckets where people would have to touch the tap for the water to flow, which could be a source of infection.

She advised community members to adhere to precautionary measures to help prevent the spread of COVID-19 in the country.

Members of the communities expressed gratitude to New Energy for the initiative saying they would adopt the tippy taps to regularly wash their hands.

They, however, appealed to New Energy to support them with hand sanitisers to keep their hands clean when not at home to use the tippy taps.

Anti-gay bill : Tell foreign missions if they provoke us we'...
2 minutes ago