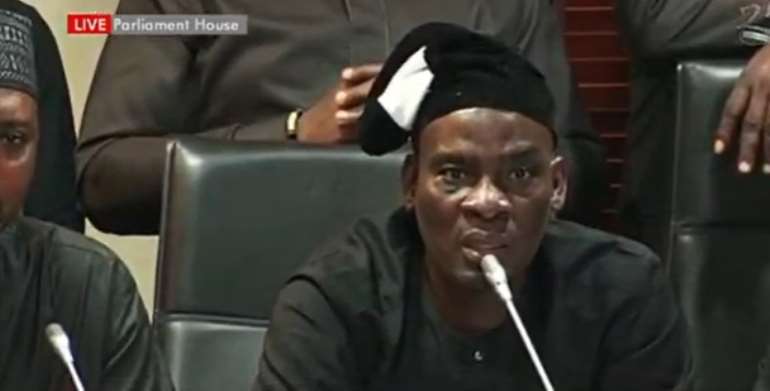 It couldn't get crazier. Call it a payback time.The Minority in Ghana's Parliament House staged an anticipated boycott when President Akufo-Addo was readying to deliver his 4th State Of The Union Address (SONA) yesterday.

No kidding, they walked out like little ducklings following their mother in a pretty little line. Heaven knows where this move would lead them tomorrow.

Was item 13 more important than SONA?
I learned some minority members went back to the House to enjoy or feast on Jollof and Soda. 'Waa' Look!

Days ahead of the SONA some minority MPs had hinted that they'd walk out. It therefore came as no surprise to their majority counterparts in the House.

Haruna Iddrisu, Minority Leader of Parliament defiantly led the group out to spite the Majority but more specifically, send a message to the President who they've described as a 'dictator' and an autocratic leader.

Prior to their exit they'd create a scene.
There was embarrassment. There was drama and there was nuisance. The intrepid eyes of cameras flickered everywhere. It was a blissful day for the tech gadgets. And it seemed everybody's camera was fed well. There was plenty to feast on. Smartphones perhaps, became more than useful,, in the midst of the seemingly chaotic situation.

There were two groups of paparazzi.
The traditional group from the media houses and members of the diplomatic corp.

Smackbogged by the turn of events the diplomats fetched their cellphones from their pockets and purses to record the bizarre scene. And flitting the august House like darts were jeers, interspersed with claps and stomps. The two sides booed one another for a considerable time period.

House on Fire
And did you know the honourables could sing? Cacaphonic songs by the two sides-- the Majority and Minority burst the seams of the Parliament building. The President looked on calmly. His eyes panned the setting. He saw the empty seats. He heard the cat calls and the taunts from the Minority NDC. But he was also serenaded by the Majority NPP MPs. They also filled the void left by the NDC MP,s (referring to the empty seats).

For awhile ,it appeared all had gone bad. However, they showed some level of civility because the situation didn't turn into a brawl, as we've seen it happen elsewhere.

No chairs were thrown at members.
And no blows were traded.
The Speaker of the House. Rt. Rev. Mike
Aaron Ocqauye was as cool as a cucumber.
He announced the presence of former Presidents Rawlings and Kufour.

The Vice President Bawumia and the Chief Justice Kwasi Anin graced the occasion. Conspicuously missing though was former President Mahama.

So, who'd have the last laugh?
Ever since the opposition NDC was flipped over or turned upside down (defeated in the 2016 elections) like a turtle, the party has been trying desperately or helplessly to get back on its feet. It's been using pickets, protests, boycotts and threats of boycotts as means to get heard. It isn't a bad democratic exercise. Far better than throwing bombs and causing mayhem.

Question however, is, are these threats and boycotts becoming too much and how much is too much?

I think to the NDC not until the governing NPP yield to their demands, they won't stop. Until that's achieved nothing is too much.

Would the Elephant yield though?
In the aftermath of the dramatic boycott the Minority organised a press conference addressed by its leader, Hon. Haruna Iddrisu in Parliament to explain their action.

According to them since becoming President of our republic, Akufo-Addo has conducted the affairs of state with the kind of "tyranny, despotism and authoritarianism" that frightens many objective observers.

"We've in the face of extreme provocation exercised restraint and urged the president to depart from his perilous path that puts the democracy of our country at great risk.

"Sadly, matters are totally out of control.
The democracy we all toiled and sacrificed to establish is now threatened by the highhandedness of President Akufo-Addo.

The man who in opposition styled himself as a champion democrat has turned out to be a nightmare and an existential threat to our fledgling democracy.. We continue to witness heightened impunity from officialdom," a part of the statement read.

What was the President's message for Ghanaians?

After the boisterous tidal waves, it seemed the president put the furore in his rearview mirror.

Mr. Akufo-Addo touted some achievements chalked by his government .“We've made significant strides, over the last three years” in our “fight against corruption, despite the skepticism of people with questionable records”.

“We've strengthened the legal framework to fight corruption, with the help of this House, by passing into law the Witness Protection Act, 2018 (Act 959), the Office of the Special Prosecutor Act, 2018 (Act 959), the Right to Information (RTI) Act, 2019 (Act 989), and the Companies Act, 2019, (Act 992), which provides a framework for enacting a beneficial ownership register”.

On Budgetary
He said the government, has increased budgetary allocations to all the accountability institutions of state, including the Parliament of Ghana, the Judiciary, Commission on Human Rights and Administrative Justice (CHRAJ), Economic and Organised Crime Office (EOCO), the Office of the Attorney General and Ministry of Justice; the Auditor-General, the Office of the Special Prosecutor and the Ghana Police Service, with annual increases between 25% and 34% between 2017 and 2019, he told the nation.

What'd he have to say about almighty corruption?

According to him some of the anti-corruption measures his government has put in place over the past three years have yielded results.

“We've also implemented a change from the opaque allocation of Ghana’s oil blocks to a more transparent allocation process, and advisedly so. The opaque period, 2013 to 2016, saw, according to the Ministry of Energy, the signature of thirteen (13) petroleum agreements, from which fourteen (14) wells were to be drilled. Not a single well was drilled. In contrast, in my time, over the last three (3) years, there have been six (6) drilling campaigns on three (3) different blocks, with others on the way. We will drill more and find more oil.

“Some forty or more (40) high profile personalities are currently before the courts on various corruption charges and more are in the pipeline. I will like to repeat that if evidence of corruption is presented, no one will be spared, regardless of position or political affiliation. No one is above the law. That is the true meaning of equality before the law.

“Mr Speaker, as part of our strategy to modernise the economy, deliver government services efficiently, and curb corruption, Government has over the last three years embarked on a major program of digitisation of the economy with significant success.

As of the end of last week, 9.2 million people have been registered for the National ID card, the Ghana card. Before the end of this year, Ghana will have a fully working national ID system, which will be a game-changer for our nation”.

This forms part of efforts to resource the police service well enough to fight crime, the president told parliament.

He also announced that the number of police personnel has also been increased.

“Police numbers have been increased and will be increased further until we meet the recommended ratio. The police has been provided with tools and equipment including over 600 vehicles and incoming helicopters.

“The government will continue to work with the management of the police service to ensure that there is proper and adequate training in modern policing methods and equipping of the service to enable them deal with crime,"