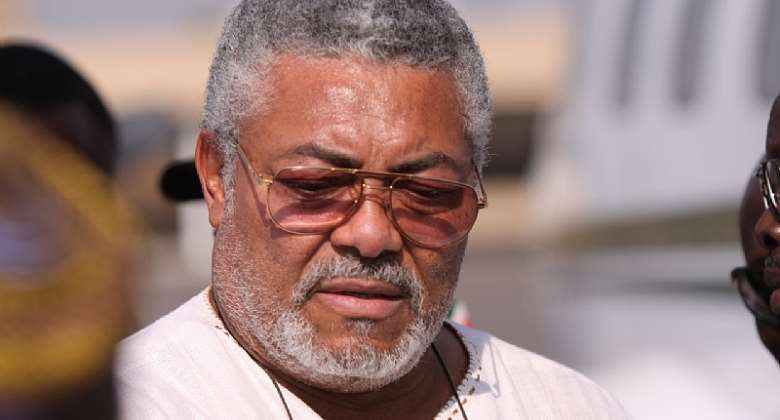 All flags are flying at half-mast.
All roads leading to his residence at the Ridge enclave in Accra are littered with grief and sorrow.

'Odupon atutu,' a Mighty Tree has fallen.
Flight lieutenant Jerry John Rawlings, the first President of the Fourth Republic has passed on.

As a man walketh the path of fame, glory and accomplishes his mission here on Earth, it appears the obvious knocks on his door. Certainly, none of us can avoid the inevitable death. It's a matter of time.

Again, none of us knoweth when except the Man who controls time and knows the dearth of time.

The only one who can turn dawn to dusk and vice versa. The only one that makes decisions at his own choosing.

Sounds cruel, but that's the reality!
On Thursday 12 November 2020 the former President's Maker called him.. And he said to him:

Come on in, and have a peaceful rest."
Arguably, the chief curator of the Fourth Republic.

The soldier that soldiered on. A brave man that blazed the trail of this tested Republic.

I saw you hobble out of the hangar. The look on your face and the urges were electrifying. The runaway was ready for you. But you were readier than her.

The nose gear was lifted off and it soon hit the climb.

I saw you get into cruise flight, cruising like a bald Eagle.

Togbui Sri III, sorry for your huge loss. Awoamefia accept our condolences. The whole Ghana joins you to mourn, this great man.

Togbui Nutifafa Fiaga ( Senior peace chief) have a safe journey home. Without a doubt you fostered peace and stability in new Ghana.

Nananom, it bears repeat. Death was here a couple of days ago. The tyrant came prowling here. He wore the ugliest mask and would do the ugliest thing on Thursday morning. The creepy guy was up to no good! He'd lull us all to sleep, so that he could be his creepiest self. And behold, he managed to put his wicked plot into action-- leaving us all distraught and heartbroken.

I mean how dare you do this to his family, friends and to the nation he loved so dearly?

Indeed, thou remindeth me of this quote from great Shakespeare: 'On pain of death, no person be so bold.'

But I'll be defiant. I refuse to be intimidated by your foreboding posture. And I won't be cowed even as you roar like a bear.

You know what I've got.
Don't you? I still possess my tiniest but deadly weapon. And I pledge to continue to use it. I'll urge him to give his all to immortalise this great man of ours. This man of valor. This man who wooed power and slept with her for nearly 20 years.

Now a nation grieves her illustrious son.
As all flags fly at half-mast.
I see the tides fold their wings.
I see the Moon bewitched by the Sun and I see the Northern Star lose her steady ground.

In a statement issued by the former President on Friday, 13 November 2020: He wrote: “My wife, Theresa, and I are deeply saddened by the passing of former President Jerry John Rawlings, whose untimely death reported yesterday came as a thunderbolt to us and our children.”

He noted that: “President Rawlings was the longest-serving head of state since our nation’s independence in 1957. When the time came for him to step down as President on 7 January 2001, he obliged and obviously tried to contain whatever reservations about me and my government that succeeded him and his government, within the bounds of the national constitution of 1992."

“We’re left now to mourn him and also express our heartfelt condolences to his widow Mrs. Nana Konadu Agemang-Rawlings, their children, and the larger family.”

Meanwhile, the father of the nation President Akufo-Addo has directed that all national flags fly at half-mast for the next seven days in all parts of the country.

The "government will work closely with the family of President Rawlings on the arrangement for a fitting state funeral for the late president and will keep the nation informed accordingly", Mr. Akufo-Addo said this when he visited the bereaved family on Friday.

Mr. Rawlings flew to the heavens on Thursday morning with flight no. GH73. You'll truly be missed Papa J.