Weah's Monstrous Complex Vs. The Tiny 14th Military Hospital – 10 Reasons Why We Cannot Clap Even For A Minute 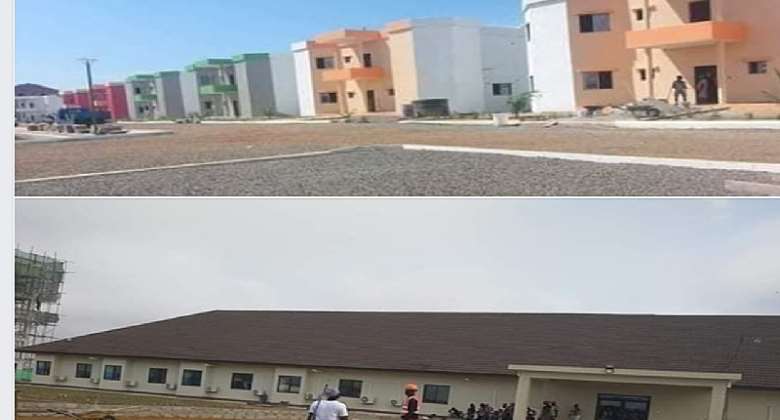 As men and women in arms observe the 63rd Armed Forces Day, President George M. Weah has for the third time toured the 14th Military Hospital even though it is yet to be fully completed and equipped with medical facilities and the requisite manpower. The hospital which sits on 5 of 75 acres was inspected again by the Commander-in-Chief on Monday, February 10, 2020. This project appears to be the biggest achievement of the CDC-led government after 2 years in power.

But pro-CDC fanatics and pro-Weah publicists are getting this wrong altogether. The biggest achievement of this government in my opinion is Weah’s monstrous complex on the RIA Highway. The “military hospital” is far less in terms of worth than president Weah’s private complex of over 40 exotic duplexes. These are 10 reasons why we cannot clap even for a minute in recognition of this tiny “military hospital”:

Why did ex-Soccer Star George Weah even name this military hospital after his retired jersey (#14) when he didn't spend a dime of his own money to build it? Isn't this a form of mockery? Former Chelsea Striker Didier Drogba built an advanced hospital with US$4.5 million of his own money (from Pepsi Deal) for his people in Ivory Coast but he didn't name this hospital after his name or his jersey's number. Why didn't Ellen Johnson-Sirleaf name Tappita Hospital after her own name especially when Tappita Hospital is far more advanced than this tiny Military Hospital?

What did President GMW say he is building? A Military Hospital or a Military Clinic? The latter would suffice as a reality considering what a military looks like in Ghana, Sierra Leone, Guinea, Ivory Country, Nigeria, and other nations in Africa.

It would be unjust to our collective conscience if we even clap for 1 minute. So, I've chosen not to be a victim of such collective guilt. That's why I think we cannot and must not clap for even a minute.

No Mr. President, it doesn't! Sorry to say that it is too late to buy time and shift the public’s attention from the real issues. Please spare us this gimmick. There is no genuine solution in populist rhetoric and political pageantry. Such mere publicity stunt injures more than it heals. We've had enough of this since January 22, 2018.

Does President GMW understand "The Politics of Rice and Gas" and its corresponding consequences? April 14, 1979 Riot was provoked by RICE and GAS. The President along with his idol worshipers needs to read dialectics. The high demand for gas due to its prolonged shortage is sharply increasing the prices of basic goods and services under this regime. The "Change for Hope" slogan has become another mere fiasco and a promise betrayed.

About The Author: Martin K. N. Kollie is a Liberian activist, columnist, and economist. He is a former student leader and a proponent for social democracy and economic freedom. Martin currently lives in exile and can be reached via [email protected]

Woman arrested for cooking 3-year-old daughter over missing ...
53 minutes ago