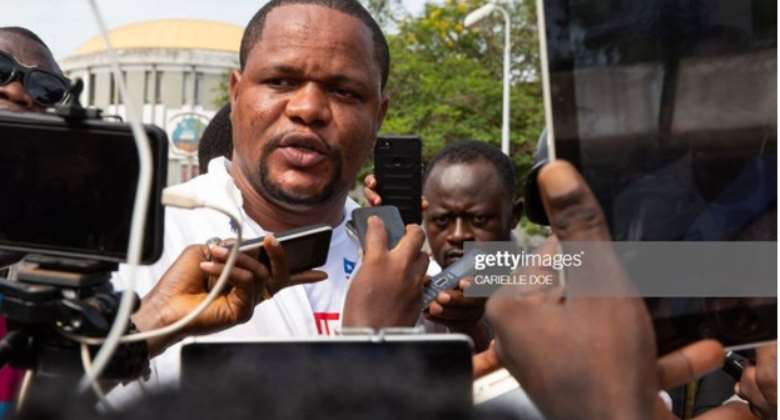 Greetings and shalom to you wherever you are patriot HPC.

You’ve fought a good fight. You’ve risked your life in pursuit of social justice and economic parity. History honors your bravery and sense of patriotism to country and people. You are such a brilliant, articulate and powerful voice. It is your voice that this new ruling clique really fears.

But right now, I am more concerned about your safety and security. I encourage you to be cautious and vigilant while in Liberia. The government has a vicious agenda to hunt you down. Do not submit to any BIN investigation. You are a major target of repression and torture. Likewise, all other members of COP. Voices of dissent under this extravagant ex-footballer have to be very mindful especially under a hostile regime like CDC's.

The Bureau of Immigration and Naturalization (BIN) is no longer credible and impartial. It has become a FRAUD like Patrick Sudue's LNP. They’ve been compromised to entrap you et al. The executive order is to arrest and harm you. The Country has become a POLICE STATE just in a period of 24 months. Almost all independent security apparatuses have succumbed to partisanship and political maneuverings. The CDC and Pres. George M Weah intend to settle political scores with you. It is all about paying back for your peaceful action through mass protests on June 7, 2019 and January 6, 2020.

If you are still in Liberia, I plead with you to leave tonight. There are 48 official border points in Liberia and most of them are very vulnerable (without immigration and police officers). I too managed to escape through one of those border points when I was viciously hunted and attacked by security operatives and thugs loyal to CDC (Sabu Unit and Zebra Unit).

You cannot and must not submit to any investigation. Do not turn yourself over to those pro-poor crooks, predators and ruffians. They are a Coalition of Desperate Charlatans (CDC) whose ultimate intent is to crackdown on critical voices and press freedom. Do not obey any ‘LAW’ because those enforcing the LAW are compromised and lawless, including President George M Weah himself who has violated almost all of our LAWS.

Thomas Jefferson said, “If a law is unjust, a man is not only right to disobey it, he is obligated to do so.” In addendum, Martin Luther King, Jr. was succinct when he said, “One has a moral responsibility to disobey unjust laws”. I just thought to remind you with these famous quotes because your right to travel is being arbitrarily withheld and unfairly sanctioned by GOL. Article 13 of our Constitution is under attack. The regime has already failed. It is hunting for a prey to predate on.

The government you are dealing with is not civilized and sophisticated. It is lawless, inept, clueless, repressive and dictatorial. The CDC-led government has no value or respect for basic human rights and justice. CDC is a direct opposite of democracy. Weah and his agent provocateurs have hired warlords, ex-combatants, and street gangs to hunt down critical voices. I was a victim of such conspiracy and so I had to flee.

The Weah-led government has no credibility to judge you or any critic. It has lost morality and legitimacy. Your action to flee Liberia under such condition would be legally justified, morally upright, and rationally prudent. You are not running away from THE LAW as your accusers and cynics may presume, but you are running away from THE LAWLESS (a callous and unjust system).

They (GOL through BIN) officially authorized your entry into Liberia through your laissez-passer. But they are now illegally resisting your departure through this very same laissez-passer they stamped upon your arrival. No serious and democratic government indulges into such SCAM and brutish harassment simply intended to gain political capital or show strength.

Remain safe brother. Remain hopeful and stronger. Tighten your security and watch your back. You can be certain of my fullest support as you endure these tough times. We must never give up this fight until Liberia and Liberians are rescued from this looming catastrophe and premature political project (CDC). We must never surrender our batons because history has no accolade for cowards. You've committed no crime. Your only charge is to speak out against societal ills.

The regime is crumbling and cracking so fast. The contradictions are enormous. The substructure and the superstructure of the Liberian society are collapsing under this clueless and corrupt administration. There are objective factors or conditions, in the context of dialectics, which may soon spike an irreversible revolution. Weah along with his assembly of idol worshipers and hustler is perplexed due to these emerging shocks. They've got no solution. The 'beginning and end' of this regime is similar to GIGO. They are operating on borrowed time and at the mercy of the masses.

Of course, Weah and his cabal of pillagers are hanging on a thin rope. The lava will soon erupt and CDC shall instantly melt. HPC, you cannot be a prey or victim of such decay. Not now, or even tomorrow. Remain hopeful and courageous but cautious and careful as well, comrade brother Henry P. Costa. The days of glory and triumph for Liberia and Liberians are nearing. The nation will soon break away from this dark present and prevailing nightmare (CDC). We've already had enough.

Bearing in mind that our collective struggle is against a self-gratifying president who has zero knowledge in governance and zero vision for Liberia, let us continue to honestly strive, patriotically inspire, and consciously educate THE MASSES because all is not lost. Let us not lose focus and faith. Let us remain optimistic of a NEW DAWN. There will certainly be a new day after GMW along with his empire of white-collar rascals and leeching predators.

Beyond this end, I hope you pay heed to my plea and look up to God for shielding. Please leave Liberia now because our country has become a risky zone for fierce critics, independent journalists, and voices of opposition parties. Remember, we were once described by President George Weah as ENEMIES OF THE STATE even though the real enemies should actually be those economic migrants who siphoned our missing L$16 billion and US$25 million.