Liberia is incurring huge revenue losses – Is there any concrete solution to RIA nightmare? Yes, and here’s it

The RIA catastrophe poses serious security, economic, and diplomatic risks to Liberia. This situation has turned into a national emergency. Therefore, I would like to help find solution and this is how. I read a few comments under my previous Facebook post pertinent to RIA debacle and two particular comments struck me: “Is Liberia losing revenue?” and “How much is spent on fuel?”

Part of my work as an activist is to dig out hard facts and promote national consciousness through accurate information dissimilation. So, I am going to answer just three (3) key questions:

Whenever an aircraft reroutes or switches to Sierra Leone or any neighboring country, Liberia does incur or suffer huge revenue losses. At RIA, there are two major charges or fees that are paid by commercial aircrafts or international flights, namely: Per Passenger Airport Tax and Per Aircraft Airport Tax.

Note: On just one aircraft (SN Brussels), Liberia lost over US$44,000. This could buy more than 800 gallons of fuel for RIA to run its generator all day.

According to the RIA management in an official press statement released on April 1, 2022, eight hundred (800) gallons of diesel fuel are needed in order to run RIA on a daily basis. How much does a gallon of diesel fuel cost in Liberia? As at April 25, 2022, a gallon of diesel is 707.8 Liberian Dollar which is US$4.67 according to Global Petrol Prices (https://www.globalpetrolprices.com/Liberia/diesel_prices/).

The break is below or see attached document:

So, at 800 gallons of diesel per day, how much is RIA spending? Liberia is spending US$3,733.6 (LRD 566,218.4). This means that RIA needs over 111,990 to buy just diesel fuel alone per month. Expenses for transportation and maintenance of generators are not even included. In a period of 12 months, diesel fuel will cost RIA over 1,343,880 USD. Wow. Just for fuel alone when the Farmington River is just nearby? This leads me to question #3. 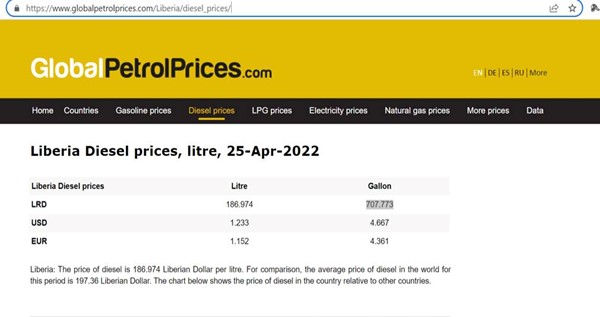 Is there any concrete solution to power outage at RIA?

The Firestone Rubber Plantation occupies 251 square miles (650 kilometer square) which is about 0.6% of Liberia. This company has generated billions of USD in profit from Liberia since 1926 when it leased 1 million acres of land for 99 years at a price of USD 6 cents per acre. Firestone Rubber Plantation currently operates a hydropower plant on River Farmington. They run 4 turbines with a capacity of 4800kWp with an annual output of 1.6 x 103 kilowatts (Source: http://www.renewables-liberia.info/index.php/projects-new/project-plants).

RIA cannot be in darkness while a foreign investment company right adjacent RIA, Firestone Rubber Plantation, has 24/7 electricity even though Firestone is using our river to generate such electric power. Mr. Weah and his team must engage Firestone now to urgently explore possibilities for Firestone to supply RIA with electricity. A win-win approach could be applied here.

Dozens of international airports are dependent on solar energy. This could cut down cost and reduce carbon emissions (e.g. a good way to address global warming). For instance, Cochin International Airport in India is 100% dependent on solar panels with a total solar capacity of 28.8MW. In Africa, George Airport in South Africa is powered by solar energy. It has 2,000 solar panels which generate up to 750kWh every day and this exceeds the 400kWh need to run the airport. How much does an airport solar panel cost?

According to the Center for Aviation (CAPA), prices of airport solar panels have fallen by up to 50%. CAPA writes, “For a simple first phase industrial array up to 100MW, such as installed on an airfield: the price might be USD1.50 to USD2.30 per panel (Source: https://centreforaviation.com/analysis/reports/airports--the-environment-solar-power-begins-generating-stellar-savings-part-1---100-airports-act-250723)...” The average price of a solar panel globally is $2.75 per watt according to solar.com. So, what’s preventing RIA from shifting towards solar energy at least 25% during dry season?

If Firestone is using River Farmington to generate electric power, why not RIA too? After all, this is our own river. How much does it cost to build a mini hydropower? Though prices may vary as per country but such variation may not be wide. According to a UK-based energy company, Renewable First, it would cost £624,000 to get a 130kW mini hydro system. This is little over half a million USD. To be more specific, it would cost 784,586 USD. But RIA is spending more than 1.3 million USD just on diesel fuel per year. Even if we spend 5 million USD on a mini hydro in order to power RIA, we will be able to save 2,796,470 USD in 5 years. Most important, we will save ourselves from such international disgrace.

This is where I want to help. As an exiled activist and a citizen of Liberia, I will develop a concept or a framework on these three (3) possible solutions. I will do this FREE OF CHARGE. I have reached out to a few technocrats/technicians (e.g. engineers) and they are willing to join me for us to do this together. Again, we will do this free of charge. Though my position against Mr. Weah and his Government remains unchanged but this is far beyond political disagreement/dissent. The concept will also identify revenue sources to fund the implementation of these projects. I am not only interested in criticizing but I am also interested in solutionizing.

As always, I want to be a part of The Solution Equation. Liberia first, Liberia last, Liberia forever.

About The Author: Martin K. N. Kollie is an exiled Liberian activist and he can be reached via [email protected]