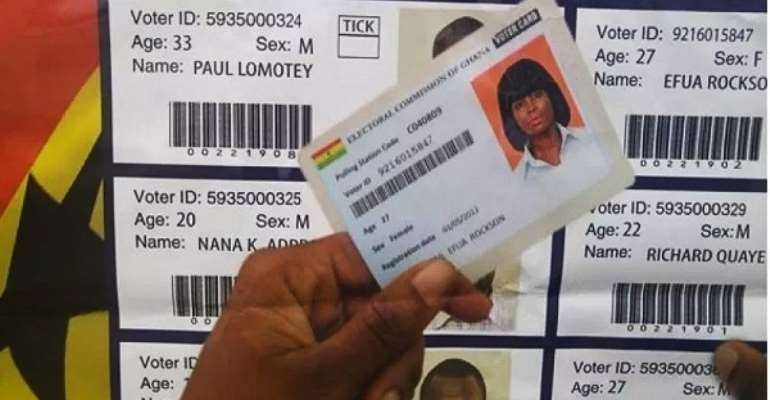 The request for a new Voters' Register, now in a political storm, photo credit: Ghana media

Creating a State Voters’ Register is a significant step forward for the development of Ghana, as a Democratic country seeking to integrate into the world community.

The purpose of the Voters’ Register is to ensure the state registration of citizens of Ghana, who have the right to vote in accordance with the Constitution of Ghana, to draw up quality voter lists for voting during elections and referendums.

Once, a Voters’ Register is created, it acts as a data bank, that contains personal information of all voters in Ghana.

Ghana as a nation that attained independence over six decades ago needs to move forward towards development, thus; the Electoral Commission’s decision to create a new Voters' Register, shouldn’t have led to any unrest or demonstrations in the country.

However, sometimes, the desperate actions of people, just because they want something at all costs, create suspicions to divide a nation.

That’s the case of Nana Akufo Addo. His clandestine and cunning efforts to hold on to power, despite his ineffective government, have changed the mind of many Ghanaians against him.

Akufo Addo promised to fight corruption, yet he has been implicated in corruption scandals more than John Mahama.

Even though he appointed the Special Prosecutor, Martin Amidu, to lead the fight against corruption, the man couldn’t do his job as he wants because of his superior's actions.

Under the iron fist of Akufo Addo, he controlled the Special Prosecutor to avoid prosecuting any politician which might affect the NPP party. Thus; the man was appointed just to deceive Ghanaians about the fight against corruption.

With over 123 ministers, plus a leader who claims to be a lawyer, Akufo Addo has governed the weakest economy and judiciary systems in the world. In Ghana's judiciary, elites don’t go to jail, it’s only goats and chicken thieves.

As often said: “A desperate person does desperate things,” to enhance his chances to win the 2020 elections, Akufo Addo, gave promotion to 6,000 police officers and has gone further to give another promotion to over 400 junior immigration officers.

The collapse of the banking institutions' impact may probably take Ghana several years to recover. At the moment, Ghanaians and the government are facing a deep financial crisis, amidst a poor economy, therefore, the need to issue large currencies is rather a catalyst to kill the already troubled economy.

Yet, because of the 2020 elections, desperate Akufo Addo, who needs money to finance the campaigns and elections, issued the high currencies into the market.

The desperate actions of the Ghanaian leader have affected his integrity and trust to the extent that the request for a new Voter’s Register by the Electoral Commission, has been greeted with contempt.

How to rebuild his trust and soiled reputation, are now the tasks he must concentrate on. Even if he wins the elections, he will still encounter problems because he has completely lost his confidence and credibility.