Akufo Addo, What Is The Impact Of The Country's Economic Growth Under Your Administration? 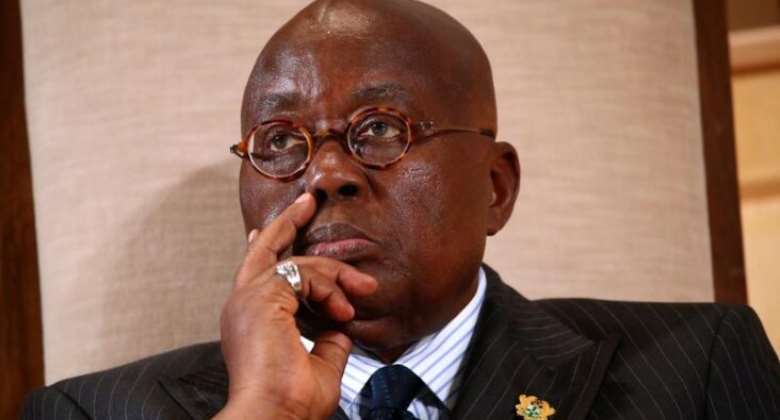 During the end of year Christmas Message, delivered by President Nana Akufo Addo, on December 24, the President praised the economic growth of the country under his administration and also made it known to Ghanaians and probably Ghanaians in the Diaspora, of his future developmental plans.

According to President Akufo Addo, some of the achievements by his administration, are reviving the healthcare system (while ambulances imported by his administration are parked to be distributed next year, hoping that will facilitate his coming to the office for the second time.)

And also, the agricultural sector in Ghana experienced a bumper harvest of foodstuffs for two years in succession with food prices in their lowest in years; while thousands of teachers, health workers, graduates and non-graduates alike have been given jobs.

It is likely that in recent years, Ghana's official figures for gross domestic product showed the country to be one of the fastest-growing major economies in the world but this is not what the president must be proud of. Sincere Ghanaians will agree with me that Akufo Addo has failed Ghana.

This is not the first time I'm making this reference: Ghana is richer than Belgium, at the same time, we mustn't underestimate our education but the fact we can't ignore is the Prime Minister of Belgium, Charles Michel, who has decided to step down after five years in office, to take a post offered by the European Union, created 290, 000 jobs within five years and improved Belgium's economy to 71%.

Frankly speaking, the hardships experienced under Nana Akufo Addo's administration have never been experienced in any democratic rule in Ghana.

Whereby the Ghanaian leader, Nana Akufo Addo, claims that thousands of teachers, health workers, graduates and non-graduates alike have been given jobs, Ghana’s current unemployment rate stands as one of the highest, comparing to the unemployment rate in the administration of previous leaders.

In August 2019, the Minister of Employment and Labour Relations, Ignatius Baffuor Awuah, during his turn at the Meet the Press, said Ghana’s unemployment rate stands at 3.7 percent. According to him 422,000 Ghanaians unemployed, 417,000 others not searching.

In fact, the unemployment rate information was suppressed by the minister because the rate was higher than what he revealed. Ghana’s unemployment rate for 2018 was 6.71%, a 0.08% increase from 2017. This right figure was released by ‘Macrotrends.’

There is no possibility that Ghanaians would have better employment after banking institutions collapsed and many companies under Nana Akufo Addo’s administration folded, due to bankruptcy.

Ghanaians are not stupid, therefore, governments must try to be transparent when dealing with such sensitive issues or with people that many are well educated but prefer to be quiet when it comes to political issues in Ghana.

There are factors that attribute to rapid economic growth. You can boast of the implementation of free education but what you have failed to talk about is other issues, such as the drastic impact of economic hardships on Ghanaians today.

As a matter of fact, there are many wrong choices and administration setbacks your administration made which you have refused to apologize to Ghanaians. An example of one such serious setback is ignoring the current depressing economic situation in Ghana, while the Bank of Ghana recently launched new higher denomination Ghana cedi banknotes. Who at all is your personal advisor? Or you are responsible for every catastrophic decision?

Hypocritically, Mr. Osei Kyei Mensah Bonsu, the Member of Parliament for Suame constituency, falsely or deliberately wants Ghanaians to understand that the NDC is the evilest political party in Ghana, which wants to see to the fall of the NPP.

However, Nana Akufo Addo, the fact that you did abandon uncompleted projects by the former government, makes you eviler than John Mahama because the projects are for Ghanaians.

In fact, you want to see both the downfall of Ghana and the NDC party at the same time.

So, if you think this abominable thing you did, which no government in a civilized world will do, qualifies you to be in the office to rule Ghanaians for the second time, then I wish Ghanaians good luck.

I am neither a psychologist nor a psychiatrist but I can clearly see the frustrations of Ghanaians, why they love a failure president than the NDC leader.

They were really sick and tired of Mahama’s corruptible administration, which in fact, your ministers have done the same, including your involvement in Ghana's Soccer Corruption, which sent Nyantakyi away.

If you are truly an intelligent and sincere Ghanaian leader, you’ll acknowledge the big financial loss your administration has incurred in Ghana.

In my opinion, instead of talking about your success of economic growth in Ghana, which impact didn’t bring any significant comfort to the common Ghanaians, apologies to the people for abandoning the uncompleted projects by the former government will be better

That will make you a good African leader and give you more recognition of global politics because it will be a piece of great news for the foreign media.