Should Ghanaians Consider A Fourth Armed Service - To Beef Beef Up And Ensure Internal Security? 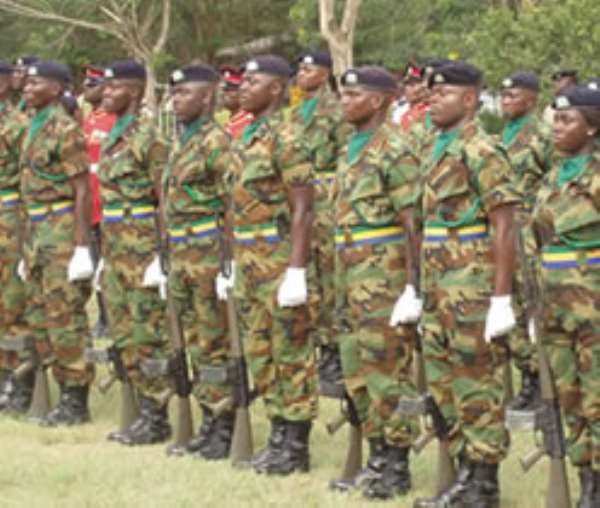 No modern African society in which there is indiscipline - and which also happens to be a nation where people regularly take the law into their own hands - can possibly be a country with a bright future. That is why the rising tide of indiscipline in Ghana society ought to be of concern to every patriotic Ghanaian - who is also an ardent pan-Africanist. At all costs, we must instill discipline in our younger generations. Full stop.

For the sake of Ghanaian democracy, the rising tide of lawlessness in our homeland Ghana, must no longer be tolerated. It is a clear and present danger to our democracy. Above all, it is a phenomenon that flies in the face of a basic requirement, for all stable democratic societies the world over: Tolerance.

Democracy is not only just about laws governing the relationships between our institutions of state. It is also a way of life anchored on tolerance - in all societal interactions. Intolerant people cannot possibly practice democracy successfully.

Our political parties, for example, ought to controlled by moderate politicians - not by the hotheaded and blockhead politicans that now dominate the two biggest parties, the ruling New Patriotic Party (NPP), and the largest opposition party, the National Democratic Congress (NDC). Haaba.

If we are to remain a democratic society, - in which the rule of law prevails - we must stop taking our nation's stability and the cohesion of society for granted. Perhaps the question we must ponder over is: Are there vested interests in Ghana that profit from lawlessness?

The short answer to that is, yes, there are: Those who have grown super-rich from gang-raping Mother Nature, and those profiting so mightily, from the illicit trade that has resulted in the proliferation of small arms in Ghana.

And, perchance, are the conspiracy theorists in our midst - who insist that Ghanaians need to be more disciplined and security conscious because our country has many secret enemies in the West African sub-region (who are apparently envious of the advances we have made over the decades as a people) - right in pointing in the direction of illegal gold mining, illegal logging, illegal sand-winning, and the small arms trade?

It is in that light that the rising tide of indiscipline in Ghana society ought to be seen. It flies in the face of that basic requirement for democratic societies - Tolerance. As a people we must no longer be accepting of lawlessness. It is a clear and present danger to our democracy.

Should we, for example, not now have tough new laws on our Statute Books, prescribing mandatory life jail terms with hard labour (and without the possibility of parole), as a response to the egregious illegal gold mining, illegal logging and illegal sand-winning that is destroying the remainder of our nation's natural heritage?

Finally, in a way, Kenya - in addition to the traditional three armed services - can also be said to have a fourth armed service, the much-feared paramilitary force, the General Service Unit. The question is: Should Ghanaians consider a fourth armed service - to beef up and ensure internal security? They must be as well-trained, and equipped, as the world's best special forces, such as Britain's Special Air Squadron (SAS ).