To Whom Does Ghana Belong? 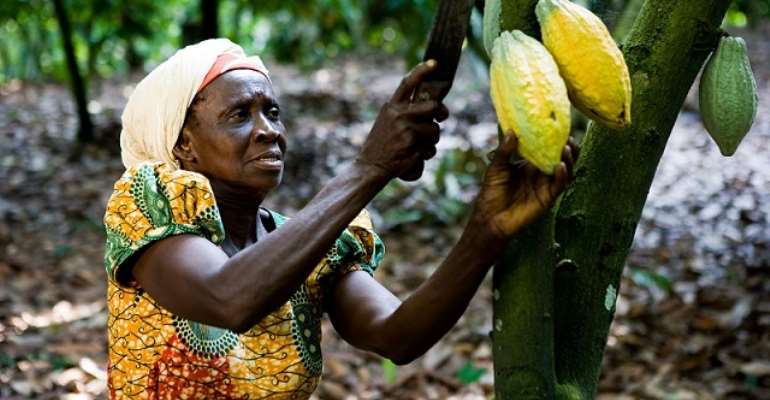 I am a Ghanaian, born on January I9, 1957, at Cape Coast. I grew up distinctively in Moree, a fishing village in the central region of Ghana, Sekondi, and Accra, selling bread and eggs, for my mother, driving taxis and tro-tro, in both Cape Coast and Accra to keep me financially independent.

Nobody can tell me the real and actual definition of suffering in a corruptible country like Ghana, that nepotism and tribalism play roles in politics. In Ghana, if you don't know the head of an institution or a school, you can be denied a job or admission in a higher school, even though you are qualified.

Therefore, do not cheat me, you politicians and so-called elites in Ghana because I have no access to government coffers and benefits. Even though I am a Ghanaian, there is nothing I can boast of our leaders, when it comes to comfort or living like a normal human being.

All that I know is the looting of state treasures by a few people who have given themselves that power and opportunity ordinary Ghanaians don't have, pretending they care about the people, while they face extreme poverty and hardships.

My taxi is off the road and I don't have enough money to buy some food. I am hungry. I found a single Koobi-(salted tilapia) in my mother’s kitchen. Immature as I was, I didn’t put the fish in the water to drain the excessive salt covering it. I put it on the fire until it was cooked.

The first kenkey which I swallowed with the fish, released a severe toxic acidic burning fluid from my throat to my heart. It was the most painful experience I have ever had in my life when it comes to eating. I thought I have had heart disease because for weeks, I still had the pain in my chest.

I know, I am not alone suffering that time because I had a lot of friends who had completed secondary education, the sixth form, the university and others looking for jobs without success. To whom does Ghana belong?

Is the country not for every Ghanaian? But why are so many people suffering in such a manner while all the money is in the hands of a few people who pretend they care about Ghanaians?

Ghana belongs to Ghanaians but it is obvious that the majority of the population are under intense hardship, while the natural treasures are being enjoyed by politicians or a few people within the governmental establishments that have access to the government's coffers.

My father is already dead, while nineteen, as the eldest among four brothers and three sisters, to make things better or easier for my mother, I told her I am leaving to Nigeria.

Thus, in early 1980, I left the shores of Ghana, to the oil-rich Nigeria, without a slight idea that Nigeria, one of the richest countries in the world, would one day be a broken pot that nobody can mend.

Nigeria was an extremely rich country. I witnessed the rate of 35 kobo for one dollar, moreover, the Naira wasn’t an international currency but it was available in almost all the international rich countries.

I worked as a driver and a roof technician. One of my articles on ModernGhana news was about ‘Driving Chief Obafemi Awolowo, the leader of the Unity Party Of Nigeria, through the principal streets of Calabar.

After leaving Nigeria, I refused to travel to Europe because I thought I can live independently in Ghana, without depending on Europe. In Ghana, I lost all that I had in Nigeria and the economic hardships in the country increased my woes.

I have no choice but to return to Nigeria. After making money again, I still refused to depend on Europe. I flew to Sierra Leone. In Freetown, I worked at the famous 'Red Lion Bakery,' at Kingtom, supplying bread at Siaka Stevens Street and Kissy Road.

In West Africa, apart from my country of birth, Nigeria and Sierra Leone, I lived in Conakry, Guinea, and the Gambia.

In the Gambia, I lived in the house of the late Mr. Odoom, a manager appointed by Ghana Airways. He was then the Ghana Airways manager in Lagos, Nigeria, before he was transferred to the Gambia. I had the desire to live in Ghana but each time I return to my country, I see how fast Ghana is deteriorating.

I realized that it’s a country, like all African countries, the politicians use the people to make money to increase their wealth. The reason in 1986, I finally left the country to Europe. I am telling you the truth that Ghanaian politicians really don't care about the suffering masses.

Ghanaian leaders always encourage Africans in the Diaspora to come and help build Ghana, yet what do they do for them? Before the death of my mother, I came home four years ago and went to see a chief about land in Kasoa, in the central region of Ghana.

With the intention to build a small factory to produce can foods for export, I gave an initial capital of 10,000 Euros for the project. During the construction the workers were attacked by a cutlass wielding men, claiming the land is for them. The deceptive chief has sold the land to other people.

I lost the money for the plot and the investment, while Ghanaian leaders and members of the parliament are enjoying with their families. To whom does Ghana belong? How can a country like Ghana be so corrupt, yet every politician claims he or she is a strong Christian or Muslim?

The United States of America and Western Europe, have always considered Africa as a commodity. Through slavery, colonialism, Apartheid, Aids, and Ebola, they looted the continent. However, we can’t keep on blaming America and Europe for all our predicaments.

African leaders, including Ghana, have disappointed Africans. Ghana is neither for a particular group of people to enjoy. The country is for every Ghanaian. The country’s resources, including the new oil discoveries, are for Ghanaians.

I have no regrets whatsoever about what I have been through in my life because whatever happens to me benefits me. However, I feel sad over the way Ghanaian leaders treat the common Ghanaians, pretending they do care about them.

This must come to an end because it affects the psychological emotions of the suffering people. Ghanaian leaders mustn't deny themselves of practical wisdom. They must understand the stress of Ghanaians to do better for them.