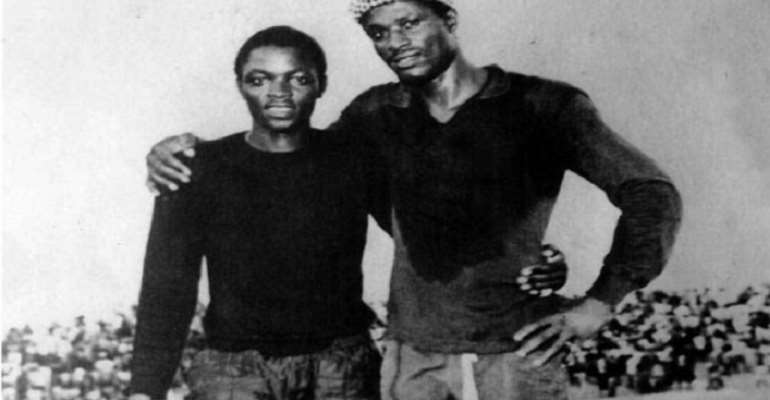 I didn’t play football but the influence of some great Ghanaian players increased my interest in soccer. I became familiar with some of the best Ghanaian teams, such as Kumasi Asante Kotoko, Accra Hearts of Oak, Accra Great Olympics, Cape Coast Vipers, Cape Coast Mysterious Dwarfs, Standfast, etc, the latter always in my mind, because Standfast team’s goalkeeper Adu, was my teacher at Abossey Okai Anglican Primary School.

At fourteen, I have already been absorbed into the epoch of Ghanaian soccer by an extraordinary goalkeeper called Robert Mensah. Everyone calls him ‘Africa Number One Goalkeeper.’ His fame had spread throughout Africa like a bush fire in the dry season.

I didn't see Robert Mensah but it seems I know him personally because his pictures were everywhere in Ghana. He was a man with a great physique, muscularly built, tall and with great humour.

Who was Robert Mensah?
Robert Mensah was born at Cape Coast, in the Central Region of Ghana in 1939. He was a Ghanaian goalkeeper known for his performances with both the Asante Kotoko and the National team.

With the latter, he reached the final of the Africa Cup of Nations in 1968 and participated in the Olympic Games in Mexico City that same year, ending up eliminated from the groups of Hungary and Israel.

With the Asante Kotoko, he won the 1971 Champions Cup of Africa and was a finalist in 1967. During his great days, due to the lack of computer, he was widely covered by print media, thus; Robert Mensah lacked proper computer documentation.

However, the print-media coverage he had in football in Africa, those years supported me to write this article about a man I never met in my life, yet his death still hurts me today. Why great people don’t live long? Robert Mensah left too early.

In the goal post, he stands around 2 meters tall, with incredible agility due to his size, which gives him advantage and dignity.

Africa is a continent of superstition, it wasn’t long I heard that his cap wasn’t just a normal one but possessed magical powers and it was a gift from his grandfather, a priest of souls when he was at the point of death.

There is no way, I can confirm this but if it is true, then a mixture of talent and magic can be portentous to create a legendary. With other great Ghanaian footballers, Robert Mensah made Ghana proud in both local and international tournaments.

Just before the final in Kinshasa in 1971, some soldiers had managed to steal the cap he used to wear in almost every game, yet he wasn’t upset about this mockery.

Robert Mensah will die at the end of that year, just at thirty-two, after being involved in a brawl in a bar, the name still in my mind since at 14, ‘Credo Bar,’ at Tema. It will be his second and obviously his last public appearance.

The brawl leads to a broken bottle, which fatally wounded Robert Mensah. He didn’t die on the spot, fighting as he always did, he finally had to surrender on November 2, 1971. His death sparked anger, throughout many African countries, including Ivory Coast.

In Ghana, it was national mourning, with tributes for the goalkeeper and to a man whose merits went beyond the simple soccer game. A tough and fearless goalkeeper, who didn’t only inspire many Africans to be interested in football but to be also goalkeepers.

The well-known columnist Addo Twum would say of him:

"He was a great man, with great hands and a big heart, and without doubt the best goalkeeper in Ghana. He ran the soccer ball as easily as Joe Louis treated the boxing gloves.

There will be other good goalkeepers, but there will never be another Mensah. Who will be remembered for his black shirt and his magic cap?

He had an excellent sense of anticipation, great physical form and the courage and confidence to throw himself on the feet of the most dangerous adversaries.

And of course, those magic hands, which could take the ball in the air without any effort, in the same way that Pelé scores his goals, will never be seen again."

The whole of Ghana came to a standstill, while the body of the great hero was brought Kumasi from Tema. The children refused to go to school and some adults didn't work.

But who killed Robert Mensah?
In one of my articles on ModernGhana, published on June 26, 2019, captioned “All My Friends In Ghana Are Dying One By One, Why?” I did mention the names of some good friends who were dead.

Together with Fifi Ephraim (deceased) brothers Ato and Crossing Cobbold (both deceased) J. K, Antobam Smith, Nana Gyepi and Assawa, both former footballers, I had my first glimpse at Isaac Melfah, the one who killed Robert Mensah, in the early eighties, at a local immigrants suburb in Lagos, Nigeria, called Okobiriki.

Crossing Cobbold whispered into my ear, "Ato Savage, this is Isaac Melfah, the man who killed Robert Mensah." He warned me not to look at him too much because he wouldn’t be happy if he sees me watching him.

I am not a detective but as soon as I saw Isaac Melfah, I knew immediately the man might have killed Robert Mensah in self-defense. I can’t imagine such a lanky slim-little figure, could kill a giant. It’s hard to believe this man really killed Robert Mensah.

How I wish these great Ghanaian soccer stars could be remembered in a special way.