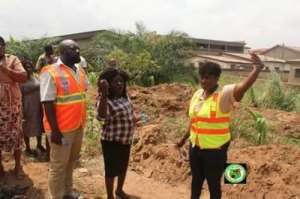 We give thanks to the Lord and the framers of the 1992 constitution of Ghana that has many good provisions. In the constitution is the provision for the setting up of District and municipal assemblies throughout the country. The Assemblies are meant to promote development projects in the areas of education, Health, roads, sanitation etc. Along the line of development the Assemblies are enjoined to seek the welfare of the people.

Most of the District and Municipal Chief Executives and their staffs are living up to expectation. However a close look at the performance of the Municipal Chief Executive of the Ga East Municipal Assembly Janet Tulasi Mensah shows that she is performing quite well. Being sympathetic to the cause of people in her area she is quick in responding to their calls when disasters such flooding and fire outbreaks occur.

In the company of the head of NADMO in the Ga East and his technical staff the MCE was on hand to inspect and asses damage caused by fire near the Haatso Market in Accra recently. She was also on hand to assess the damage done to floods at Ashongman Pure water where she advised the residents in the area to unite and help the Council to end the perenial flooding. In the flood and fire prone areas the advise given by her is that they must follow the building codes to stop building on water ways and to remove all unauthorized structures includmg kiosks that can be demolished.

Another milestone chalked under the MCE is the completion of some kindergarten structures and the supply of furniture very much needed in the municipality. What we have learnt as exceptional is that the MCE herself has the habit of moving to all locations to deal with issues with leading staff and workers of her municipality.At all times while on locations the MCE appears in her "working gear".

Another feat the MCE chalked is the collaboration of the Ga East and Ghana Revenue Service to educate the people on revenue mobilization and the rules governing it. The program was held at Haatso Accra during which officials of Ghana Revenue Service took participants through the rules governing revenue collection. That was good as it will help in revenue collection. The MCE did not rest there, but went on to follow through on the Limited Registration Exercise organized throughout the country recently. In all the MCE does she has the support of her Assembly members and the Member of Parliament for Dome Kwabenya Honorable Lawyer Adjoa Safo who is always on hand to offer support.

She has also been involving the Traditional Rulers and the Zongo Chiefs to whom she extended assistance of food donation during the Ramadan Fast period and Eid al Fitr celebration. By this write up we are not comparing the MCE with others in a national contest.. Am sure there are many MMDCES who are doing quite well in their jurisdictions. We have not been to get to know what they do. We'll do so at the right time God willing .. However we can stick our neck to say that the Ga East MCE Janet Tulasi Mensah has lived up to expectation so far.