Let's Be Calm After The Polls In And Outside Parliament 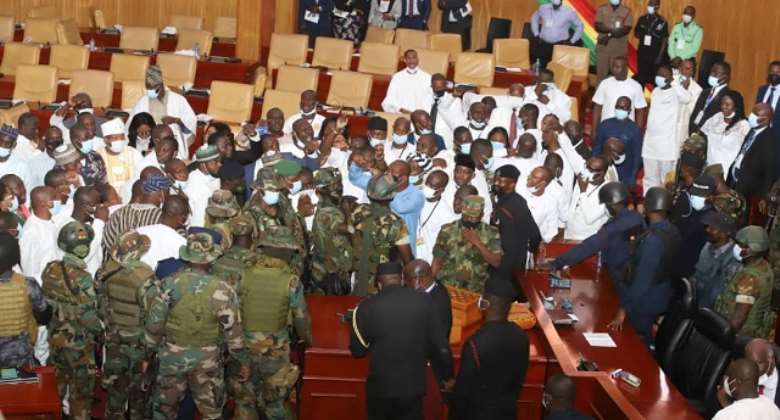 Soon after the December 7 polls the nation moved into an unchartered Democratic era. For the first time since the inception of the fourth republic in 1992, the two leading political parties the NPP and NDC have been denied absolute majority in parliament. Each side of the current Parliament has 137 MPs giving us a 'hung' legislature for the first time with a speaker emerging from the opposing party to the elected President. Though the sitting President Nana Akufo addo has retained his presidency to pursue a second four year term, it seems he's going to run through his work with the current legislature that would have to agree to work in harmony and consensus. The first test to this begun with the strange experience leading to the election of a new speaker for the cut 8th parliament. Instead being orderly and peaceful, the Election of the new speaker Hon Alban Bagbin had to go through jostling,snatcing and kicking of ballot box and papers by some MPs from the NDC and NPP. Those involved are our law makers who we are told were fighting for their right. However some members of the public feel that their behavior was wrong and not good example for the coming generations. The MPs being our law makers have a way to deal with wrong doers in Parliament. The question to ask is apart from Hon. Carlos Ahenkora who is being accused of snatching ballot papers other MPs were also seen struggling with him with others kicking the ballot box in the Parliament House. Is Hon Ahenkora the only culprit in this jostling game or the others who struggled with him would also be accused of wrong doing.? The authorities concerned must muster caurage to deal with this issue in the interest of the nation and the coming generations.. Since we have a hung Parliament we are not going to have proceedings in Parliament running through easily as before. However both side of the house must realise that they can only achieve their objectives if they work together in harmony and cooperation. One of the parties NDC might not be in government but they may have the numbers to scrutinize every policy loans and legislations from the president. However it is only advisable for them to consider helping to pass good laws and offer advise to amend those with some weaknesses. Apart from the nation benefiting from those laws, loans and infrastructural development their own constuents and the nation as a whole would benefit from them.

Currently calm seems to have been restored throughout the nation after the hulabaloos after the polls. The president seems ready to begin appointing Ministers and other government appointees while we wait for the outcome of the petition filed by president MAHAMA against alleged wrongs perpetrated in the December polls. While the government begins to put things in place it's advisable for all to remain calm. What's required is for the president to consider various advise being given by people of all over the nation to the president. Parliament must also get ready to vet the appointees objectively as happened in the past. What is important is that those to be appointed must also be ready to hit the ground running.

Henceforth both parties must advise their followers to be law abiding. Everyone must know that we would continue enjoy our honor and respect as a credible and peaceful NATION if we remain calm after the polls.Henceforth both parties must advise their followers to be law abiding. The period of campaigning is over What they need to do is move in to perform their duties as government appointees, business men and women, traders, and students. Everyone must learn to tone down on harsh criticisms laden with insults on our main and social media. It has a way of inflaming tention and conflicts. Physical and verbal Attacks on the Media men are not good.. However both the media and members of the public must work within the ambit of the law and rules governing libel and sedition. Ghanaians upholds the tenets of the Right to Information and accept the advise to be citizens and not spectators. However we all including our levislators and journalists must be measured in our utterances in the media. As said earlier we must make presentations without attacking personalities with unsubstantiated evidence. With this we'll move on together continue building our nation together peacefully. Long live Ghana. Let's remain peaceful and strong together