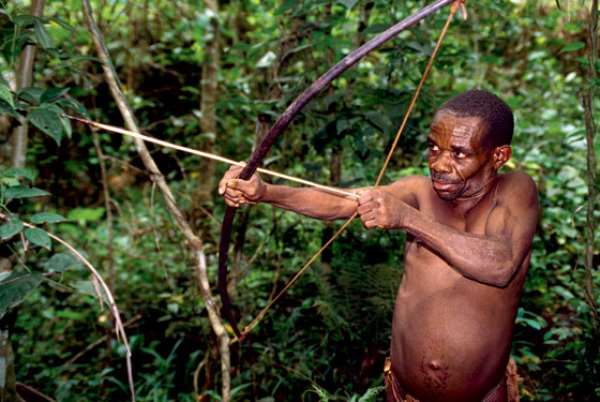 The Pygmy, a word derived from Greek, meaning ‘the size of the fist,’ Pygmies are the indigenous people of tropical Africa, living in the valleys of the Congo River. The Pygmies speak the Bantu language.

According to genetic studies, the tribe of pygmies originated about 30 thousand years ago. The earliest references to the pygmies are found in ancient Egyptian texts written five thousand years ago, also written by the ancient historians Strabo and Herodotus.

The average height of an adult man rarely exceeds 150 cm, women do not exceed 120 cm. The light brown colour of the skin and the thin shape of the lips are noticeably different from the majority of the inhabitants of the African continent. The average life expectancy of a pygmy is 45 years.

All the African pygmy populations descend from a single population that up until 20,000 years ago lived, without interruption, a territory that ranged from the Atlantic coasts to the Indian coasts of Central Africa. They dwell mostly in Congo and Cameroun.

The population had also separated itself from the neighbouring ones dedicated to agriculture about 60,000 years ago. This was established by international research coordinated by the Institute Pasteur of Paris, whose results were published in the latest issue of the online journal PLoS.

Scientists often conduct special studies to determine which genetic mutations caused the low growth of the pygmies. According to one common hypothesis, over time, body size gradually declined due to the constant lack of food.

Currently, there are approximately 350 thousand pygmies living in the world. They lead a nomadic lifestyle, constantly moving because of a lack of food in tropical forests. The main activities are gathering and hunting.

Members of the tribe feed mainly on plants and fruits, less often fish and game. Pygmies go hunting with spears, bows, and arrows, for large animals they arrange traps. Tribes wander in small groups, 2-4 families each.

The society retains the features of matriarchy, as the woman is the main earner and also engaged in the construction of the house. The pygmies build huts of twigs, covering their igloo-styled huts with leaves and grass.

The life of Pygmies in the Central African Republic

Most of the pygmies retain their customs using loincloths made of straw or cloth covering their naked parts, while some getting familiar with modern life wear real clothes.

Until recently, scientists believed that the small growth of the pygmies helped them not only to adapt to life in the wilds but also contributed to their survival during hungry times because small body sizes required less food than large ones.

However, the high percentage of mortality among pygmies leads to the fact that their growth gradually decreases. The first person to investigate the lives of the pygmies was the German traveller Georg Schweinfurt in the second half of the XIX century.

The African pygmies are very close to extinction since their homelands have been devastated by governments logging, war, and encroachment. Their livelihoods have now become a fight for survival.