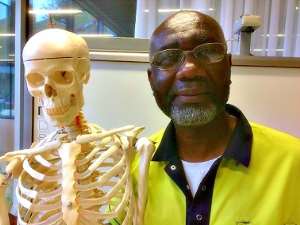 Apart from corruption, lack of efficiency and poor leadership, which have affected Africa's development, Thanatophobia, the fear of death or dying for a cause, has also played a significant role in the rapid destruction of the African continent beyond remedy.

"Everyone wants to up to heaven but nobody wants to die," sings reggae icon Peter Tosh. Everyone wants to enjoy a better life, yet nobody is prepared to sacrifice his life for that change because of the fear to die. That's why Africa is stagnant today.

The truth is bitter than the bile, therefore, one can easily become an enemy or lose his life when on the path of the truth. This is what happened to journalist Ahmed Hussein-Suale. He was silenced because of the truth.

The question is why death is inevitable yet people fear to die? Many people prefer to watch things going bad around them than to speak about it because of the fear of being killed.

Western European countries, such as Holland, Belgium, Britain, Germany, France, and America, had their treasures stolen from Africa, yet none of these countries want to see the progress of Africa. Each country has played a role in destroying Africa in a special way.

However, it hasn't been an issue of concern to African leaders to change the situation in Africa because each one fears to speak about crimes the US government commits in Africa.

In Europe, many Africans face discrimination and abuse. They will talk about it the whole day and plan to demonstrate. When the time comes, you'll find yourself alone standing at the venue where the demonstration has to begin. Fear has already scattered all of them.

If you try to find out the reason many Africans behave in such a stupid manner in Europe, they will tell you, "I am scared I will lose my documents or simply tell you, "Onua eduani ye de," brother, food is delicious. Many Africans are even scared to go to the police if someone hurts them.

Due to the fear that foreign governments know exists on the African continent and in Africans, both the continent of Africa and Africans have suffered a great deal.

The International Criminal Court in The Hague, keep on hunting for African leaders accused of political crimes in Africa, yet, the crimes foreign governments, such as the US government commits in other countries, passed unnoticed.

Surprisingly, African leaders never say a word against this discrimination and injustice. Why Africa will not be a target for destruction? If we learn to respect ourselves, others will give us respect but since African leaders don't respect themselves, no one respects an African.

Nobody mustn't think that I am a fool to go to a hospital to investigate the abnormally high death rate of Africans in a Belgium hospital to bring it to an end. Nobody should consider me a fool in pursuing the truth if indeed Ebola is a biological weapon by the US government.

Wisdom is better than silver and gold and it's a big disgrace for someone to die shallow minded or a moron if you failed to use your brain to find out the truth about lies which health institutions such as the World Health Organization and Centers for Disease Control want us to believe.

I was very glad when I travelled to Germany to see Dr. Wolff Geisler and Holland to meet scientist Johan Van Dongen, just because of I want to know the truth behind Ebola and my journeys weren't a waste at all. Now I know that the US government is responsible for Ebola in Africa.

It was Dr. Wolff Geisler's studio, I read about Aids, Ebola, Burkitt's lymphoma, Kaposi sarcoma, nodding disease and other cancerous diseases were all man-made diseases by the US and British governments and deliberately inflicted on the African population.

If I am afraid to die, I wouldn't have found out the truth behind all these medical crimes committed in Africa, under the supervision of the World Health Organization and the Centers for Disease Control.

These crimes also give us a common idea and understanding of how those medical crimes in Africa are covered up to avoid detection. In fact, some Africans are given high positions by the United Nations and the World Health Organization for Africans to gain confidence in them.

In other words, people like Tedros Adhanom Ghebreyesus, the Director-General of the World Health Organization, was given the post to deceive their own people, Africans, that bats are responsible for Ebola in Africa.

The enemy, the devil, prowls around like a roaring lion looking for people to devour and the fertile ground or the right place they found is in Africa.

That is the reason Africa is the only continent in the world among other continents which has suffered slavery, colonialism brutalities, Apartheid, Aids and Ebola.

Africa has suffered a great deal and still suffering because it's a continent the common enemy knows that if we strike them, they don't strike back.

Medicines sent to Africa are heavily contaminated giving rise to many diseases, such as breast cancer and infertility.

Until the day African leaders will be brave to act responsibly, Africa will continue to suffer, putting the future of our children and grandchildren in a state of desperation without hope.

Western Europe and America don't care about the welfare of Africans. This is what African leaders must understand. In order to control our own resources if it's necessary to fight, we must stand firm and bold without fear to save our continent.

It is only a dream of illusion if Africans or any African leader may think that Africa is free. So long as the continent has rich resources which are the reservoir for advanced countries' development, what the continent has experienced in the past is just the tip of the iceberg.

Until we hit back, Africa will always be a doormat for foreign governments. Legends are born, apart from Kwame Nkrumah, who will carve his name in the precious gold to be recognized as a great leader Ghanaian leader who has brought a significant change not in Ghana but on the entire African continent?

I believe that's what everyone is waiting for. The sad African story must be reversed to a happy one because it has been in this position for too long.