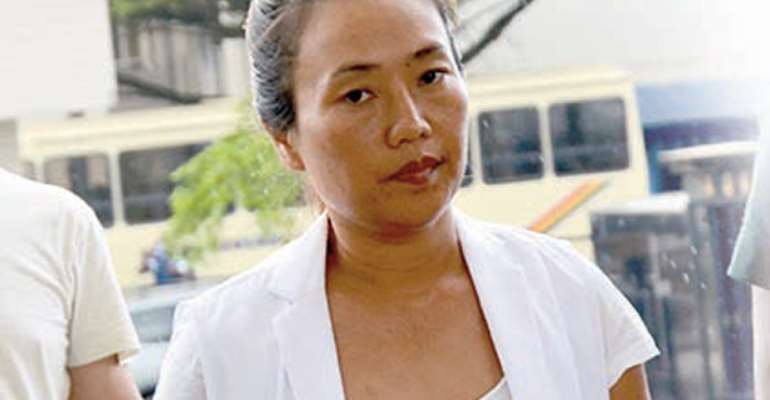 Not surprising but callously bizarre, Mr. John Dramani Mahama (JDM) – the defeated former president turned NDC's 2020 presidential candidate, is at his political theatrics again. Alongside many of his party followers, Mr. Mahama is all over the place desperately speaking from both sides of his mouth that if he were to be elected president in Ghana again, his NDC-led government would definitely seek extradition of the deported Chinese national Ms. Aisha Huang, aka “Galamsey Queen”, to face some state charges.

And re-echoing Mahama-led NDC-2020 propaganda playbook during a discussion on the Joy FM News File segment, an ex-deputy minister of information and current Member of Parliament (MP) for North Tongu, Mr. Samuel Okudzeto Ablakwa, claimed to the effect that his party leader JDM had given him the nod to let the whole world know that it is one of the future NDC government's avowed plans to extradite the so-called “Galamsey Queen” to face criminal charges in Ghana. But, contributing to the same panel discussion, Mr. Kweku Baako Jnr of the New Crusading Guide fame offers realistically counter perspective that not only is it doubtful but also it's “mission impossible” for any country to succeed in pushing Chinese government to extradite one of its own (citizen) to another country to be prosecuted.

Here, Mr. Baako is right and knows exactly what he is talking about as opposed to Mr. Mahama or Mr. Ablakwa, including all those people who seem to be struggling to catch up with the intricacies of contemporary interstates relations. Unless the main opposition party current leaders are bent on belittling the intelligence of Ghanaians, then based on their campaign talking points in view of Ms. Aisha Huang's expulsion from the country, it is quite clear former president Mahama and his unwavering supporters within the NDC have no clue regarding the concept of extradition and what it actually entails in international affairs.

Thus, when the (true) veteran Ghanaian journalist Mr. Baako offers a counterintuitive response to Mr. Ablakwa's extradition proposition, it is obvious the NDC's lawmaker from North Tongu, like his party top apparatchiks, is knee-deep in lies, propaganda, and jingoism or politics of nationalistic pretentions. A closer look at Mr. Mahama and the behaviours of his lackeys and pronouncements out of power deceivingly paints a picture as though they care so much about the interests of the nation and all Ghanaians; but, many of us know their abysmal track record when they were in power prior to December 2016.

As the cliché goes: “It's easier said than done”; China is not a mere average country like Ghana or any of the push-over African nation to approach to talk about extradition of its citizens. First, let someone ask the desperate NDC flag bearer and his minions if Ghana and China have extradition treaty? Second, if the two countries have extradition pact, then what are the key elements of the agreement? In other words, does it cover the particular case allegedly involving the Chinese “Galamsey Queen”?

Surely, it is overly “mission impossible” to think of seeking extradition of a Chinese native from the Asian giant nation, as Mr. Baako rightly opined. This is because even United States of all countries with its expansive networks of global diplomacy and power finds China a hard nut to crack in the international arena. So, for Mr. Mahama and his shameless propagandists, including their amateur negotiators to sit here and braggingly deceive Ghanaians that somehow an NDC government can bring back Ms. Huang via extradition process is a lying joke.

For their information, Mr. Mahama and all his campaign surrogates need to know once and for all that China is one of the smartest countries very skillful in the art of modern diplomacy. Indeed, contemporary China expertly knows how to use “soft power” to get what it wants in the international relations domain. Let no one deceive his or herself into believing that China's often “respectful” or low-key appearance in dealing with other countries is in anyway suggestive of timidity or a portrayal of its true intent. Interstates relations 101 teaches that as fast-rising world power, China knows it does not need to engage in any drag-down confrontation or a full-blown conflict—barring any serious threat to its national sovereignty—to stand in its way to attain an ultimate objective of a superpower status. China's behaviour in the international scene is analogous to the “anaconda in the grass.” One may step on that dangerous but “respectful” creature at one's own peril if one knows what that means.

Currently, when we talk about the global major power players, China comes right after the United States – the world's surviving unipolar “superpower” in terms of military as well as economic. Unlike the former Soviet Union/Russia, China is about the only country in our modern times that has been able to rival U.S. “boot-for-boot” in the economic sphere in pursuit of its long-term goal of military superiority.

In fact, China has the money (economic power) backed by sophisticated military resources – a development that has been giving the U.S. policymakers and their intelligence community sleepless nights. In short, it is this giant of a 21st century rising power that the ex-president Mahama, MP Ablakwa, and many others who have clearly demonstrated their lack of in-depth knowledge of the vagaries of international politics involving key world powers such as China, are boasting of approaching in the not-too-distant future for the sole purpose of asking for extradition of one of its nationals.

Some of us may not agree with everything our good old Kweku Baako Jnr has to say all the time, but he is damned right. Mr. Ablakwa doesn't really have a mastery of interstates politics, neither the people who empowered him to offer the comments with regard to the extradition of the “Galamsey Queen” from China.