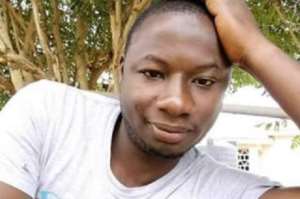 Ahmed Hussein-Suale, a journalist who used to be one of the investigators at Tiger Eye, a private investigative team, financed by Anas Aremeyaw Anas, a Ghanaian investigative journalist, on January 16, 2019, in the neighborhood of Accra, was brutally assassinated by unknown assailants.

When investigating a murder case, certain factors such as a confession, a witness and a material, have to be taken into consideration. Teeth sunk into an apple leads to the capture of a murderer and glass used by a murderer to drink, leads to his capture. These can't be achieved in Ghana to catch a killer.

Ghana is a country which isn't ripe yet, to investigate murder cases through the forensic or DNA analysis, thus, the Criminal Department of the Ghana police must use an easy way to solve this murder problem.

To look for witnesses and evidence, the investigators must follow a path that includes the study of the victim's characteristics, the analysis of the crime scene and his previous activities prior to his murder.

In these cases, special attention must be paid to witnesses and non-witnesses who can provide ample and useful information to understand the motives behind the murder.

Most murders are committed because of jealousy, revenge, economic interest, and therefore, can immediately catch the eye of the investigator and directs him in the investigation towards someone who has some kind of relationship with the victim.

In this activity, it may be useful to have photographic reproduction techniques using analog or digital media, to document every detail of the crime scene.

Life in Ghana or Africa in general, is very tough, therefore, many can kill for money and surely, someone might have information pertaining to the assassination of the journalist.

In this way, if the Ghana police really want to solve this murder problem they must pledge a certain amount of money to any informant ready to give information pertaining to the murder case of Mr. Hussein.

They must make sure that the informant’s identity is protected to avoid any setback during the investigation. For example, in Britain, the Police pay out at least £22m to informants in five years to catch the perpetrators. Source: https://www.bbc.com/news/uk-3890248

The Ghana police don’t have such amount of money to pay out to informants in solving crime cases, yet they must pay out something attractive to arrest the killers of Mr. Hussein.

This will boost Ghana's image as a serious country and probably, reduce the perception given to the country as corrupt.

Yes, special techniques are used by investigators to solve murder crimes but since the Ghana police aren’t ripe enough to solve murders case by means of forensic, they must pledge an amount to catch Ahmed killers.