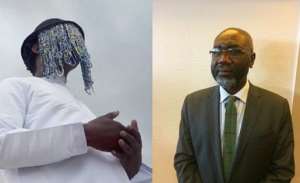 In regards to investigative journalism and my experience as a journalist, I could have done better in Ghana, dealing ruthlessly with corrupt Ghanaian politicians or officials, than Anas Aremeyaw Anas, if I am residing in the country, without any need of hiding my identity or behind a mask.

I have said before, I really appreciate the good works of Anas as an investigative journalist and also respects him but I need to tell Anas that his efforts are not yielding to any positive results in combating crime in corrupt-infested Ghana.

I don't see Anas as a sort of 'Messiah' or 'Saviour' as many Ghanaians see him. There are many journalists worldwide assigned to dangerous missions or investigations than what Anas does, yet no one wears a mask or covers the face.

In one of my articles about Anas, I wrote that he should continue to cover his face because of the poor nature of crime investigation in Ghana before journalist Ahmed Hussein-Suale was killed. It's just a coincidence that one of the members his investigation team has been killed and till now nothing has been released about the progress of the investigation or the assailants.

When Africans were dying abnormally at Antwerp's notorious hospital, called 'Stuivenberg,' I entered the health institution as a black or African journalist, without hiding behind any mask, to bring to an end to the senseless slaughter of Africans at the hospital and at the same time making it one of the safest hospitals for Africans, after my investigation.

A journalist can disguise himself to do an investigation, even European and American journalists do that to arrest drug dealers or breaking up a smuggling or crime groups but no one can hide behind a mask to do an investigation because it's a crime. Thus, I disguised my self and passed in front of the hospital several times and witnessed the number of police on the guide at the hospital.

Why the then mayor of Antwerp, Patrick Janssens stationed the police force to protect the hospital? That means the investigation was successful because it's true that they were removing body organs from Africans and deliberately kill them.

I told the Belgian government that if their country could kill over ten million Africans in Congo, yet build a statue and name streets after the lunatic king Leopold II, who did that to the Congolese, then they shouldn't call me a liar when I said they were killing Africans for body organs.

African journalists are not praised for their hard works in exposing the crimes European and American governments commit in Africa, the reason Anas is famous today. Since he has been washing the dirty linen of Africans in public. Work as a real journalist and die with courage, that's what I stand for. Neither I need a mask nor bodyguards if my conscience and heart are clean.

In the early ’20s, some Belgians, Italians, and immigrants, especially Africans, in Antwerp, started receiving letters over winning lotto tickets from Spain. It was a scheme which tricked over 1000 people out of more than a million Euros in a year by convincing them they had won the lottery.

I investigated and found out that some Nigerians have been visiting people’s doors in Antwerp, to pick addresses to the ring in Spain. Many people, especially Africans, became victims to the fraudsters who demand between 100 and 200 Euros as a processing fee.

After an investigation, I sent the results, including details of my press card, identity, and the media I was serving, in a registered letter, to the Criminal Investigation Department of the Spanish police. Just a month, the fraudsters behind the scheme were arrested, surprisingly, they were all Nigerians.

What disqualifies Anas to be a good journalist

As a matter of fact, a real, faithful, honest or a true journalist, will not hide behind a mask. Read about the history of colonialism in Africa, even though countries like Germany, Holland, Portugal, Britain etc, were extremely cruel, the cruelest was Belgium, yet why don't I hide my face behind a mask when doing investigations in Belgium?

To find out the truth behind Aids and Ebola if they were biological weapons or medical crimes against Africa, I left my work in Belgium and travelled to Holland to see the Dutch scientist, a former Professor at the University Maastricht, Johan Van Dongen. He gave me copies of his research to prove that Aids and Ebola were clandestine biological weapons against Africa.

Still, wasn't satisfied, I travelled to Germany, to see the medical doctor and the author of the book 'Aids, Origin, Spread And Healing,' Dr. Wolff Geisler. I was with him and the family for four days. He doesn't know Professor Johan Van Dongen, yet the documents he gave me were similar to what scientist Johan Van Dongen gave to me.

It was after I found out the truth, we made the health blog: SECRETS OF HIV-AIDS AND EBOLA FACTS JOURNAL - https://secretsofaidsandebola.blogspot.com/ till last year when we joined other ModernGhana columnists to spread the truth about Aids and Ebola.

America is a country many fear most because they are powerful in clandestine crimes, overthrowing governments they hate and killings. Imagine what they did to Libya and Iraq, while proudly they shout: "In God We Trust," yet I am not scared of the US government to hide behind a mask.

As a matter of fact, Anas can't work as a journalist behind a mask in any developed country. He will be arrested and press card revoked. However, since in Africa, all things are possible (not made by God but a man), Anas is working as a journalist with covered face in Ghana, while the foreign media makes him famous.

Nobody would have known Anas in his own country Ghana if he is brave enough to expose the US government, Barack Obama and Bill Gates of being responsible for Ebola in Africa. Instead, the biggest criminals are among those that have recommended Anas on his personal website.

Where I would have done better as an investigative journalist in Ghana than Anas is that his investigations are not yielding any good results. He was able to expose Nyantakyi in the biggest soccer-corruption in Ghana's football history but what was the outcome?

Nyantakyi is now free enjoying impunity of a crime he wouldn't have escaped punishment in any developed country. Moreover, I would have investigated deeply to see if the Ghanaian president, Nana Akufo is involved in the scandal because the statement made by Nyantakyi that he has the president in his pocket is very incriminating.

Anas has come out with another Galamsey scandal, shortly, it will end up just like Nyantakyi's case because corrupt elites don't go to jail.

Another fallout of Anas as a good journalist is, he couldn't even investigate how Nana Appiah Mensah, the owner of 'Menzgold Ghana Limited, escaped from Ghana, under the administration of Nana Akufo Addo, after putting the lives of investors in perpetual darkness and uncertainty. It seems Anas has refused to investigate anything which will incriminate Nana Akufo Addo.

Above all, Anas couldn't even investigate the assassination of Ahmed Hussein-Suale, a journalist serving him, therefore, what kind of an investigative journalist is Anas Aremeyaw?

I know who I am and what I can do, believe it or not, if I am residing in Ghana as an investigative journalist, politicians, and judges under the corrupt judiciary system in Ghana, will never feel comfortable until the time God will call me to sleep peacefully in my grave.