Case Five: The War We Are Comfortably Losing 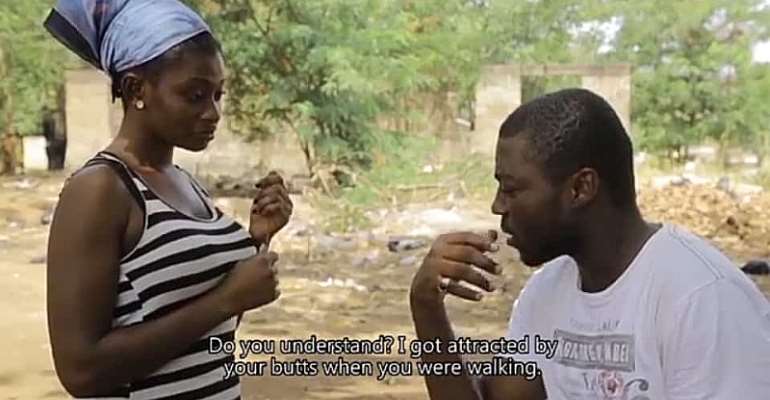 I couldn’t wash a G-string pantie even if I had one because my knuckles still hurt from accidentally scratching them against the rocky walls while I was scrubbing the bathroom close to the typical Ghanaian compound house I live in at Tema. I dare not compare the pain to that of what a woman feels in labour; I may not have felt such pain before but I have watched one in such pain. I was in Junior High School by then when one of my tutors showed me and some others a video of a woman in labour. We could see the whole “V” area in an angle of 360 degrees. Her screams were sorrowfully disturbing and they would been accompanied with insults to the man responsible and regrets of the sweet short journey that led to the fruit of the womb should they have come from a Ghanaian woman. She was delivering a baby but her screams and sounded as though thousands of lobsters were crawling out of her body.

‘Case 5’ is one of many football sizes but in Ghana it is also a mockery of baby bumps growing in a teenager (pregnancy). ‘Case 5’here is a case of war we are comfortably losing and at an alarming rate with 57, 000 teenage pregnancies recorded in the first half of 2017. The Upper East and Volta regions recorded highest teenage pregnancies in 2016. Schools are becoming a cause rather than a panacea. I say this because according to The Ghana Health Service, the number of teenage pregnancies in the Central Region alone in 2016 was 12,084, which is in fact unacceptably high. A survey conducted in that same year showed that among the groups of people responsible for about 5, 000 teenage pregnancies in that same region were farmers, drivers, and even more surprisingly teachers. Teenagers are not taught by farmers and drivers but by teachers in schools. I am not by this pardoning the farmers and drivers, not at all; they are also at fault for impregnating these teenagers, but how can teachers who teach these teenagers about adolescent reproductive health consider it appropriate to impregnate their own students! If that is so then why are they teaching these teenagers at all?

If my memory still serves me right, when I was in primary school at the age of 11, my male class teacher told me that he had a condom in his wallet and the reason he gave me to justify his decision was that he had the contraceptive just in case he found himself in a situation where he couldn’t resist the soft and sweet touch of a woman. Admittedly, I have touched a condom before but I have never owned one. My desk mate in Senior High School also gave me the opportunity to open his wallet and see the rapper of a used condom in it. Personally, I don’t see the reason why I should own a condom or any other contraceptive for that matter. I have never attended any professional sex talk in my life. All I know about sex are the little teachings I receive at home and the findings I discover about the topic out of curiosity from the internet.

I am the first and only female among my siblings, and I have had the opportunity to live in different parts of Tema, giving me the perfect exposure for writing about this topic. considering how young I am, I am older than some of the females in my extended family who in fact, already have kids of their own. The female friends I grew up with are not an exception. My very classmates who sat by my side back in primary school have also not been spared from this trend of giving birth without getting married. I remember I was asked a related question by a group of Swiss who were making a documentary about life and youth or something related to that. The same teacher I made mention of also told my class the message which explained that males should try harder than the females in their academics because at least the females have beauty and will eventually be married by men who would take care of them. Sounds weird, right? Maybe, but he is right except for the part where he made it seem like married women do not have to achieve academic excellence to acquire a good job to help in taking care of the family. 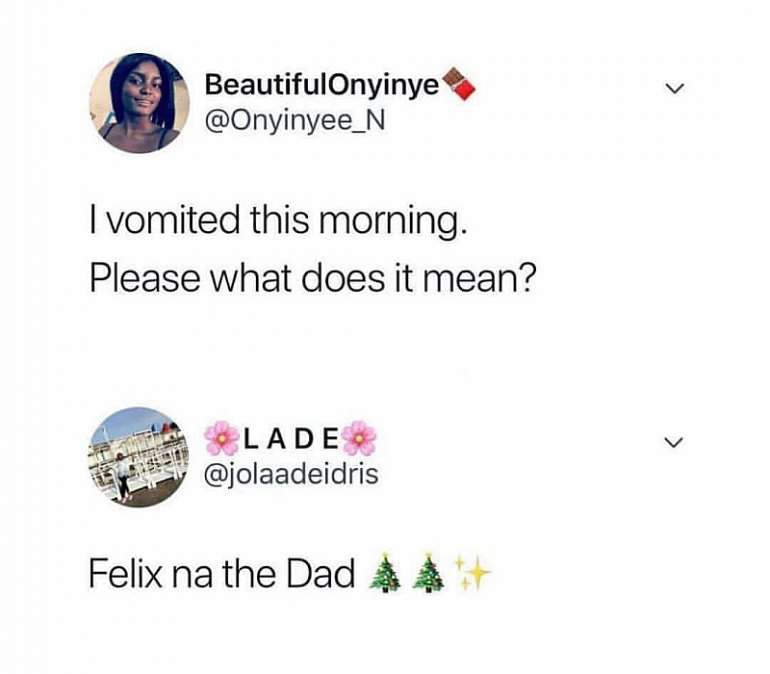 Talking about sex makes me uncomfortable; my editor knows it freaks me out just as talks about birth is excruciating for me to listen. Nowadays people, especially teenagers and unmarried young ones give birth rampantly as though labour pains are as pleasurable as sex itself. What I know is that the blind cannot lead the blind: children should not raise children. What happened to abstinence? Looking at the maternal mortality rate in Ghana, it is rather disturbing and shocking as well. The youth are just having sex as often as they breathe. What even surprises me more is that the world has openly accepted sex among the unmarried youth as though there is nothing wrong with it. Several developments are even available to enhance the act: there are websites that teach how to masturbate effectively and how to enjoy first time sex without any pain. There are now sex educative movies and non-governmental organizations which have taken it upon themselves to use their communication influence to do that which seems to me to be a way of justifying those who cannot abstain by protecting them from diseases and unwanted pregnancies; they teach how to have sex safely. It’s just like giving someone something as degrading and addictive as alcohol and then telling the person to drink safely, knowing deep down in our hearts its side effects or consequences. As an advice, the only way to drink safely is to not drink the substance at all. In the case of sex, a larger chunk of its consequence has been prevented with regard to STIs and unwanted pregnancies through intensive education on the use of contraceptives. The ‘wrong’ has been permitted and its immediate consequence prevented. The law that makes ‘sin’ legal or unaccounted for does not make it right. 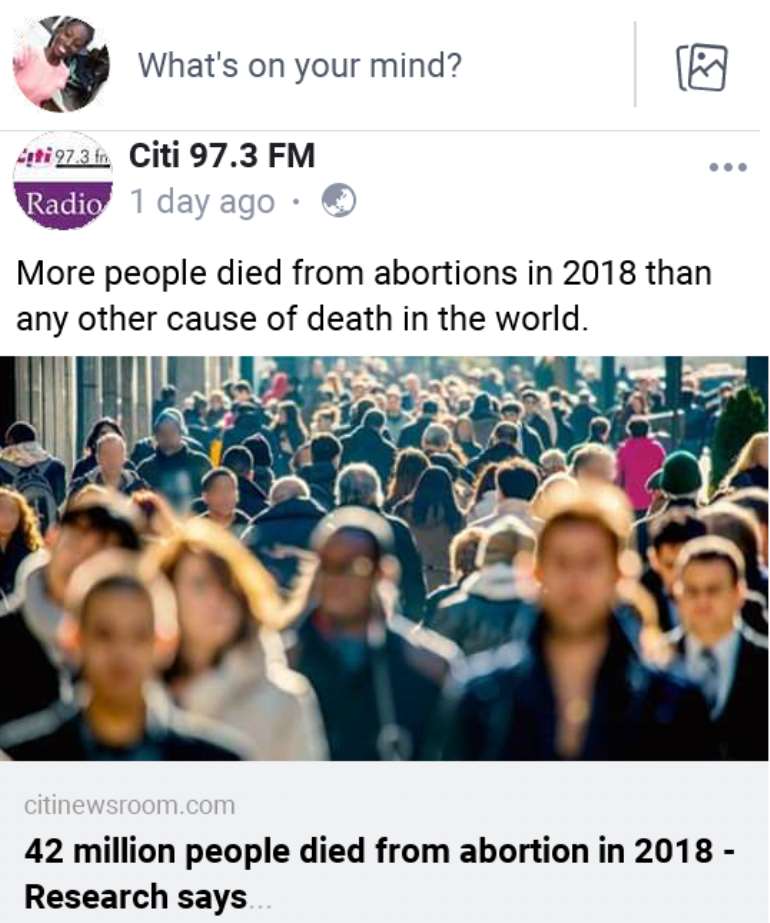 Among the Akan societies in the past, “Bragoro” puberty rite was performed for all females who had their first period (menarche) before they were honoured with marriage because at that time menarche always occurred at an age strong enough to handle marriage and pregnancies, not this century where the likes of me experienced my menarche at the age of 14. Any female at that time who could not abstain and got pregnant before the honourary rites of “Bragoro”had to go through a humiliating rite known as “kyiribra“ literally meaning ‘hates puberty rites’. This was the most humiliating rites ever because it punished the pregnant female, the responsible male and the families of both parties. This caused every parent to be on the watch to make sure that their wards would abstain. Even during those times when people were considered uncivilized, they comported their libido but same cannot be said of this so called civilized, modern and enlightened computer world of today. We see pornographic advertisements always popping up on websites every now and then. Where is the African parent who would teach the child to browse the internet safely and avoid sex before marriage? I can say that even our various religions are against the act of fornication (premarital sex); Christians, Muslims, Traditionalist among others as they all possess an element of morality. I wonder if these young ones do not have parents or elders to advice them or even a worship center to teach them the ways of their religion.

Some years ago, I was diagnosed of severe anemia and on one of the days I spent in the hospital awaiting blood transfusion, the doctor came to my ward to examine me and asked if I was sexually active. It was the first time I had ever been asked that sensitive question. One could clearly see the shock on my face upon hearing those words. I wondered what being anemic had to do with having sex but I gave him an honest answer though which was a shaking my head indicating a ‘No’. He was also shocked to hear the answer from me. In fact he found it hard to believe me. He kept on awkwardly asking me again and again. He would ask, “As in you have never ever?” and I would say ‘Yes’; he would ask again “Never ever?” and would answer ‘Yes’ again every time. (Do you see what was going on here), it seemed that he had seen so many of sexually active teenagers that it was strange to his ears that I was not sexually active as well even at that extremely young age. In my opinion, virginity is the best wedding gift any man could receive from his newly wedded wife, but lately there is almost nothing as such because before marriage it would have probably already been given out as a birthday gift, a token of appreciation, a job assurance, church “akwankyere” and even as examination marking schemes. 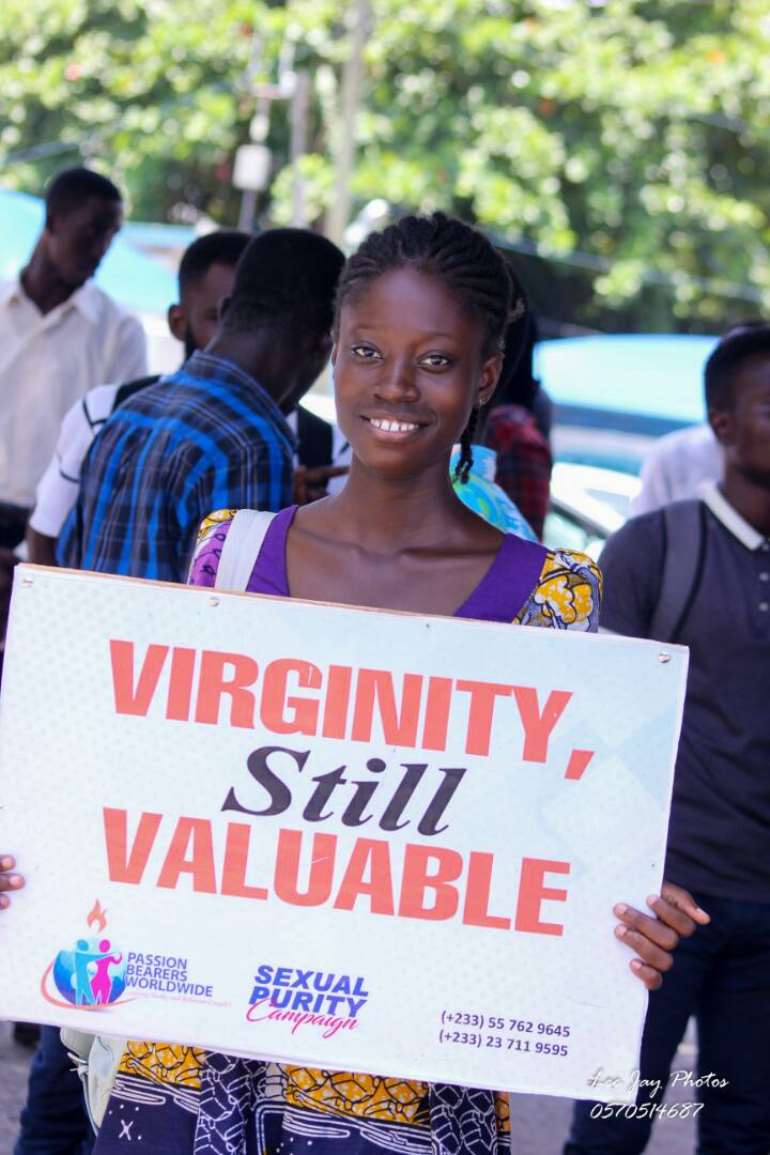 I have a younger brother who looks very much like me. I have been asked many times without number if he was my son even by old men. They ask without any shame or surprise attached to it, and all this is because the world now has gotten to that stage where it has almost officially accepted that having a teenager as a mother is nothing strange. Let us strive to be sexually pure. this post is not about virginity rather the to be sexually pure. That is even if one has already lay with a man before marriage, the need to not go back to that path is of high moral importance. Many of us have been brainwashed and desensitized thus, I say we are comfortably losing the war: The war against our sexual practices.