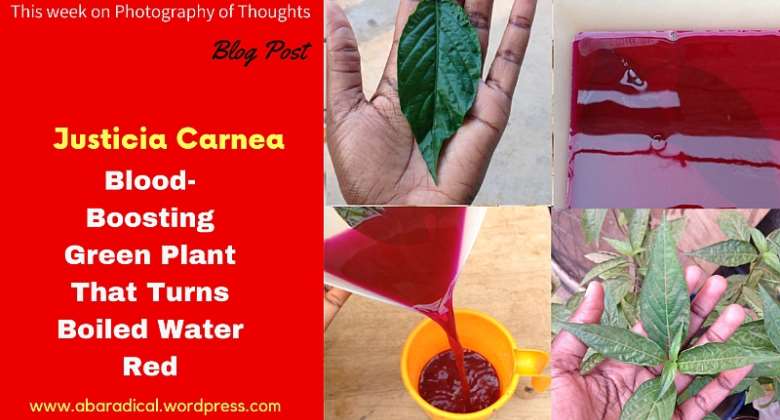 In 2016 my iron levels were very low. That was the year I was diagnosed with iron deficiency, also known as anaemia, only that mine was severe. When my test confirmed that my HB (hemoglobin) rate was at 6.1g/dl. I was shocked because I rarely experienced any symptoms of anaemia except during the time of the month.

I refused transfusion and agreed to blood-boosting medicines which worked quite well for other patients but as at 2018 my HB rate was at shocking 6.2 g/dl. I learned that the range for normal hemoglobin rate shouldn’t be less than 12 g/dl for females and 13 g/dl for males and that I still needed blood transfusion. I couldn’t afford processing fees for two pints of blood transfusion in 2018.

I took other homemade herbal medicines such as blended turkey berry with milk and sometimes and turkey berry leave extracts but that didn’t work fast enough for me. This plant is locally known in Ghana as “Abeduro”, “Kwehu nsusua”, “Anona Ntroba”, “Yaa Asantewaa” and “Kantosey”.

I also added a lot of blood-boosting foods to my diet like green leafy vegetables; organ meat, such as kidney and liver; and fruits such as banana and Oranges. These foods helped. I tried my best to avoid the immediate consumption of foods such as tea and yoghourt which could interfere with the absorption of iron in my body.

Later in 2018, through the process of looking for other alternatives other than the transfusion of two paints of blood, my uncle introduced my mom to a herbal plant whose name he did not know but had planted in his house. We also planted it at home and after a few interruptions by hens in our backyard trying to consume the leaves for whatever reason best known to them, the plant begun to flourish. I caught some goats chewing some leaves yesterday too, perhaps the animals are also aware of the benefits of the plant.

I asked my uncle and anyone else I knew for the name of this plant but all my efforts proved futile. It was even difficult to find it in Google’s search result after describing how the plant’s extract turns red despite it’s green leaves. I finally found a post on nairaland.com where one of its users asked, “I Saw These Leaves In A Village, They Said It Give Blood, Pls What’s It’s Name?” The replies to the user’s question is what helped me find the name of the plant.

Justicia Carnea (jus-TEE-see-ah KAR-nee-uh) is a flowering plant whose leaves are reportedly used by many traditional healers to cure anaemia. It is popularly and locally known as Hospital Is Too Far and Blood of Jesus. In Nigeria, the plant is known as “ogwu obara” by the Igbo’s, which means blood tonic.

Justicia Carnea has been proven by researchers who used animal models in a new study that it possesses blood-boosting properties more effective than blood tonics. This enables it to effectively restore blood levels to normalcy within short period of treatment.

Justicia Carnea leaves extract contains a rich supply of iron, riboflavin, vitamins A, C, E, B1, B2, B9, and B12.Vitamin B aids in the formation of red blood cells and helps to build tissues.

It is believed by local consumers in Ghana to possess anti-anaemic effects that boost blood levels in pregnant women, anaemic patients and also replenishes blood lost through the menstrual cycle of women.

Another specie of Justicia, called the Justicia secunda Vahl is said to be used in Benin to treat anaemia.

To prepare the solution, I first remove few fresh leaves from the stem. I sort and wash them to get rid of dust and insects. I then soak the leaves of Justicia Carnea in boiled water in a closed container for about 15 minutes. Another alternative which I am yet to try is to boil the leaves in water until the colour changes to red.

Despite it’s green leaves the boiled water turns into a purplish-red juice. Some have described the colour as red or crimson red. It actually looks purplish red when the extract is concentrated. This explains why it slightly discolors the tongue for a few minutes when the solution is concentrated.

A few months ago I learned about Justicia Carnea Holanda. It is another variety of the Justicia Carnea but I haven’t been able to figure out exactly what variety Blood of Jesus is. I have written to the Nigerian researchers who studied this plant concerning this issue but I am yet to get a reply.

I soak about ten medium sized leaves in boiled water everyday. The best part about this herbal plant is that it is the most bitter-less or should I say tasteless herb I’ve ever consumed. The first time I tasted it (I didn’t prepare the solution correctly because I only got a slight discoloration) it tasted like tea. It doesn’t even smell like a herb. It’s amazing.

Unfortunately, after I turned a year older this year, I no longer enjoy from the privileges of my private insurance cover which was made possible kind courtesy my dad’s place of work. Thus I haven’t been able to check my blood level since June 2019. I wasn’t taking the extract regularly so my blood level was still low in 2019 but not dangerously low. The good news is I feel much better now because I no longer get dizzy during that time of the month.

Have you seen this plant in your vicinity?

What do you call it in your local language?

What is is popularly called?

Have you ever used this plant for any treatment?

Kindly watch a video on this plant:

Disclaimer: The information in this video is not intended or implied to be a substitute for professional medical advice, diagnosis or treatment on anaemia or whatever the potentials of this plant is. This blog post is for informational purposes only. The views submitted by viewers of this post are solely the opinions of persons submitting them and do not necessarily reflect that of Mercy Aba Blankson (Aba Radical) and as such is not responsible for the content third parties publish, post, upload, distribute or disseminate. I’m not aware of an Food and Drugs Board approval but two research works have proven this.