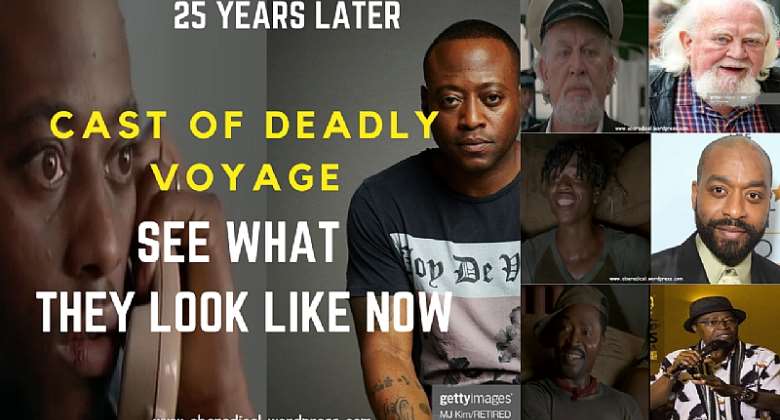 While I was making the video, “Cast Of ‘Deadly Voyage’ Where Are They Now” there was one dominant challenge running through the process. I relied heavily on the digital footprints of these cast and crew to find images and information about their acting career before, during and after the production of the 1996 John Mackenzie’s directorial film; Deadly Voyage.

With the foreign cast, it was almost too easy to find the kind of information I needed. I just had to make sure that even though it has been almost 25 years since the film was made and they might look somewhat different in appearance, I did not confuse their faces. I have a personal problem of recognizing and differentiating faces of people. Sometimes I find it difficult to differentiate them from each other and mostly tend to think they really resemble themselves. Due to this, I had to cautiously work out the now and then photos of the casts.

I unfortunately couldn’t find digital foot prints for a few of the foreign cast. These are those who played minor roles like the galley boy, radio operator, the French policeman and Palamarchouk. There was a website where I could even confirm if some of the aged actors such as Joss Ackland were still alive.

For the African cast, the foreign actors with Nigerian descent, Adewale Akinnuoye – Agbaje and Chiwetel Umeadi Ejiofor were easy to find. Just like the foreign actors, they had their profiles on Wikipedia, photos on Getty Images, and even more information from their very active social media accounts. The story was the same for Jean-Claude LaMarre and Omar Epps.

I had a lot of trouble with information about Maxine Burth. There were only a few images which didn’t look very recent. It was impossible to find out when the images were taken and had no traceable social media accounts. She had no profile on Wikipedia.

I had quite a hell of a challenge with the Ghanaian cast. I finally found traces of information on Accra based Liberian actor Omanza Eugene Shaw, Oscar Provincial and David Dontoh.

I found no information at all on veteran Ghanaian filmmaker Henry Nartey. I decided to contact some people (Abraham Atta’s manager, Mr.Mawuko Kuadzi; Oscar Provincial; Wakefield Ackuaku) personally for assistance but it didn’t yield the preferred results. I even mailed and sent a private message to Juliet Asante. Only Mawuko replied by offering to ask around. The surprising thing is that these actors were very vibrant during their time. Some of them (Brew Riverson) had no social media handles but only hash tags of their names by other social media users when they encountered them and took a photo. Some had almost blank/empty social media handles. Even though some had profiles on Wikipedia, they were studs, needed citation and wasn’t reflective of their full acting filmography. I had to add more films to Brew Riverson’s filmography on Wikipedia from the comments that people gave on Facebook posts concerning the actor.

Information of the real Kingsley Ofosu was abundant but there weren’t enough images such as the one described by journalist Nick Davis when he visited him in Accra which is the much folded photo of kingsley seated between Omar Epps and Danny Glover, the producer of the film.

I think digital footprints for Ghanaian actors; mainly the veteran ones are almost unnoticeable and very insignificant. Even their profiles on Wikipedia are either tagged as studs or needs citation. It is high time Ghanaian especially the older generations consider the internet as one of the means of passing down information from their generation to us through the internet just as the older generation passed it to them through the word of mouth.

The only time you hear about these actors are when they add their voices to the now dwindling standard of the Ghanaian movie industry and when they occasionally made a cast in a film.

Give the younger generation the chance to experience the once vibrant film industry in Ghana, let us know about it.

I have found myself in several instances where I lacked luxury of time to complete a foreign film. Sometimes due to my schedule I’m only able to see a scene of the film, but when I later describe what I briefly saw in Google’s search engine, I am provided with the film title, cast list, trailer, clip of scene described, synopsis, log line etc.

Unfortunately this does not happen with the old Ghanaian films and even worse, they don’t happen with all of the current films. Considering claims about the fallen standards of the local film industry and the praises old films have received with regards to shaping the lives of Ghanaians, these films should be re-introduced since it has been popularly chorused by many that some current filmmakers are not willing to make such legendary films anymore. Let us see, feel and know these priceless films others once made and enjoyed.

The representations of Ghanaian life in films are so bad sometimes I find it offensive and degrading. I am aware of the issue of terrible relationships between health workers and patients in hospitals but carefully take a look at how Ghanaian films represent the infrastructure of our health facilities and how the Vodafone Healthline TV show does it. I should probably talk about representation by Ghanaian films in another article.

Also, some stockpile of the thousands of films by Ghana Film Industry Corporation (GFIC) produced since the 60s have been confirmed by veteran actor Victor Lutterodt to have been destroyed when the new owners of GFIC “brought the archives into the open air and that very afternoon, there was a heavy rainstorm; all the films got soaked and damaged including all the independence day films and other special films. Today we don’t have any copies classical and antique films…”

Films like I Told You So, Sika Sumsum etc should not only be shown on 6th March or Ghana month and then one would have to wait another year to watch it again. It should be shown as much as the current films and the influx of telenovela’s are shown on TV. Some of them are on YouTube and some aren’t but it will be fair to the general public (especially kids and adults who are not social media savvy) to also access it.

On this note I commend Media General Ghana Limited-Onua TV for showing a lot of the films from the past. I’d edge other TV networks to start showing them regularly. If more than half of the TV stations can show these films once a week it would really be great.

Want to know about the rest of the cast, follow this link>>https://abaradical.wordpress.com/2020/05/27/cast-of-deadly-voyage-where-are-they-now/