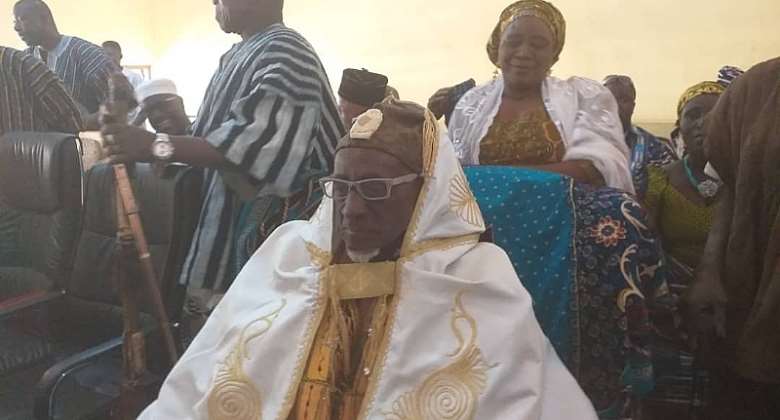 The significance of a regional capital cannot be overemphasized. A regional capital serves as the principal nucleus for political and governmental authority within the region. Regional Capitals may house all governmental branches, which typically includes executive, legislative, and judicial bodies.

Capitals serve as the face of the regions they represent. With the benefit of history, the Savannah region cannot afford a slipup in the selection of a regional capital. In a speech read for him during a Stakeholders Forum organized in Damongo on Saturday, the 12th of January, 2019 the Overlord and King of Gonjaland His Eminence Yagbonwura Tuntumba Boresa (I) stated that, “We have taken cognizance of all the diverse views expressed in various spheres about the capital of the Savannah region and wish to state without any hesitation that Damongo is our choice as Regional capital of the Savannah Region…”. This declaration is startling to say the least.

I will like to respectfully disagree with the declaration by his Eminence. My disagreement is borne out of the fact that, Damongo lacks the capacity and character to host the regional capital of the Savannah region. We can't afford to start off our eternal journey as a region on a wrong foot. As bitter as it may be, the truth must be told. The selection of Damongo as the Savannah regional capital will be a huge mistake which will come back to hurt all of us.

This article will present just five (5) reasons why Damango lacks the requisite capacity and character to be named the Savannah regional capital.

A fact that should never be lost on us is that Damongo has unfortunately joined the unenviable ranks of Chieftaincy flashpoints in Ghana. This is as a result of the search for a replacement for Damongowura Jakpa Lermu Tuntumba (II) who passed away on the 28th of January, 2016. Subsequently, there has been an implosion of the deep seated mistrust and discord among some royal families in Damongo. This has recently led to the enskinment of two individuals (Abuasewura Kelly Seidu and Yakubu Imoro Gbeadese I) as Damongowura. As a consequence, an entrenched division which has occasioned intermittent attacks and reprisal attacks was created.

As a matter of fact, a similar dispute was recorded in 2002 when the Damongo Skin became vacant. There was a disagreement between the then Canteenwura Issifu and the then Kesepewura (the late Damongowura Tuntumba Jakpa Lemu II) as to who is the rightful person to ascend the Damongo Skin. Subsequently, Yagbonwura Bawa Doshie of blessed memory had to step in after a complaint was lodged to resolve the dispute.

Sadly, the recent dispute could not be resolved amicably using our time tested traditional dispute resolution mechanism. This has resulted in the case being taken to the law courts for determination. In spite of the fact that we all pray for a speedy resolution of the dispute, we are conscious of how protracted and precarious chieftaincy disputes can be.

What is therefore the guarantee that if the regional capital is sited in Damongo this ticking time bomb won’t blowup to not just humiliate the whole of the Savannah region but scare away potential investors? Just imagine for a second if the Northern regional capital were to be sited in Yendi. We cannot and should never gamble with a region we have so hard fought for. I am glad that, the Liaison Officer made it abundantly clear during the Stakeholders Forum that, no capital will be cited in a conflict zone or Chieftaincy flashpoint.

Since the 27th of July, 1943 when the then Yagbonwura, Ewutoma Ewurbunyanso Awusi with the assistance of Chief Commissioner J.K.G. Syme moved the Seat of the Yagbonwura from Nyange (its original location, selected by the great Ndewura Jakpa with the assistance of his Spiritualist Fatigi Morukpe) to Damongo, there has been constant friction between successive Yagbonwuras on one hand and some Damongowuras and the people of Damongo on the other. With the latter repeatedly calling on the former to relocate to Nyange due to what is referred to in business circles as ‘turf consciousness’.

If in the improbable event the regional capital is located in Damongo, the stakes are going to be even higher. Hence, disagreements regarding control over land, traditional administrative jurisdiction and the relationship between government officials and the Chiefs are going to be more conspicuous. For instance, just two years ago his Majesty, the King and Overlord of Gonjaland wrote a letter to the Northern Regional Minister introducing Yakubu Imoro Gbeadese (I) as Damongowura, just a day after, a counter statement was issued by Mantowura Alhaji Abass Dangba, head of Kingmakers of Damongo indicating the illegitimacy of the Damongowura enskined by the Yagbonwura. In this chaotic instance who should the Minister and other government officials deal with?

The siting of a regional capital comes with a stringent requirement of a complex road network linking other major towns from different directions of the capital. However, Damongo faces critical capacity challenges in this direction. It is important to note that, Damongo can boast of only a single trunk road that passes through it to Sawla. As a matter of fact, the total road network of the entire West Gonja district totals just 317.48km. This is woefully inadequate, given the expected sharp increase in vehicular traffic in a regional capital. This state of affairs makes it difficult for Damongo to meet the critical transportation constraints that comes with a regional capital.

Damongo is the jewel in the crown of the Savannah region in terms of tourism attraction. This factor is supposed to be a plus when it comes to the siting of the Savannah regional capital, sadly it is the reverse. The district has a total land area of 4,715.9sqkm, part of which is occupied by the Mole National Park and the Kenikeni Forest Reserve. A portion of the Mole National Park alone occupies about 50% (2,142.67sqkm) of the total land area of the West Gonja District whiles the Kenikeni Forest Reserve occupies 517.98sqkm. This implies that the total land area available for human habitation, business establishments, schools, health facilities, airport, security service installations and other important infrastructure that comes with a regional capital is a measly 2,055.25sqkm. Hence, in the unlikely event that the Savannah regional capital is sited in Damongo, the district will face acute land availability crises due to the anticipated sharp increase in the demand for land. This is too high a risk that poses very serious future developmental problems for not just Damongo but the Savannah region as a whole.

The only way out when this happens is the unthinkable destruction of a national asset and the region’s highest tourism income earner, the protected Mole National Park to make way for needed infrastructure. It is imperative to note that, this all important Wildlife refuge is home to 742 plant species, 93 species of mammals, over 304 species of birds, 9 species of Amphibians and 33 reptile species whiles the Kenikeni Forest Reserve, the second largest forest reserve in the Northern region proudly hosts some rare flora and fauna species. This is definitely not what we want as nation and a region. We have seen how rapid and extensive regional capitals expand over the years, take Accra, Kumasi and Tamale for instance, and let us reflect on where they started and their current expanse. We must realize that siting the Savannah regional capital in Damongo is practically driving a nail in the coffin of our priced tourism assets, the Mole National Park and the Kenikeni Forest Reserve.

According to the Report of the Commission of Enquiry into the Creation of New Regions, education is the pivot around which development thrive. Consequently, it is expected that whichever town is selected as a regional capital must have enough schools to support its human resource development. It is however sad to note that, aside the newly created North Gonja district, Damongo has the lowest number (72) of educational institutions in the whole of the Savannah region.

Furthermore, it is extremely difficult to get access to justice in Damongo, as a result of the absence of a District/Magistrate Court in the whole of the West Gonja district, coupled with a very low Police (30) presence, despite the fragile nature of peace in the district. It is a fact that crime rate increases with a change in status of a town to a regional capital. Just imagine a regional capital with an increase in crime rate yet without a District/Magistrate/High Court.

It is also important to add that, Damongo has the lowest population (41,180) among the six (6) districts of the Savannah region.

That said, I will urge our most revered Chiefs and Government to critically think through the decision to name Damongo the Savannah regional capital. We have a glorious opportunity to make things right. We can’t fail posterity due to temporary convenience. The Technical Team to be setup by government must address their minds to the issues raised here in order to give the Savannah region a befitting capital.

NaBCo trainees hit the streets of Accra to demand payment of...
56 minutes ago