Just Leave Ukraine Out of NATO 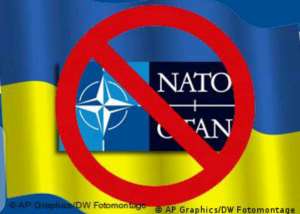 It is clear that the United States, which has covertly and overtly fought to protect the principle of spheres of influence, and in the process overthrew governments thought to be against its interests all over the Western hemisphere and beyond (including Ghana), is actively working to undermine that same principle against Russia.

The invasion of sovereign countries can never be justified. So is the spilling of innocent blood, and the destruction of property.

Therefore, Russia should never have been allowed to have a casus belli against Ukraine.

This is why I stressed that the United States and Europe have no business luring Ukraine into the North Atlantic Treaty Organization (NATO). For Ukraine falls directly into Russia's sphere of influence. No Russian President will allow Europe and America to have a missile system at its doorstep - which is what NATO Membership for Ukraine will do.

Unfortunately, for this singular miscalculated act by the United States and Europe, several innocent Ukrainians have lost their lives, and property worth millions of dollars destroyed.

Lest we forget, in July 1962, Fidel Castro, the Cuban leader entered into a security agreement with Nikita Khrushchev, the Premier of the Soviet Union, to supply Cuba with ballistic missiles.

When America got wind of Russia's security marriage with Cuba, a country less than 780 miles from the coast of the United States, we all know what happened.

The United States fiercely resisted Russia's attempt. Bringing the two super powers to the brink of a Nuclear War.

Just like Ukraine, Cuba was and still is a sovereign country, free to enter into any agreement with any country.

Why then did the United States President, J. F. Kennedy place a naval blockade on Cuba to stop it from getting access to Soviet missiles?

Therefore, none should have its weapons at the door step of the other. That is the only way both can prevent a surprise attack. By extension, prevent a nuclear catastrophe, and a possible world war.

It was based on this understanding that, on the 28th of October, 1962, Krushchev called Kennedy to inform him he had canceled the agreement with Cuba and that the missiles already in Cuba would be returned to the Soviet Union, averting the United State's attempt to conduct air strikes in Cuba.

What then stops the United States and Europe from doing what Russia did in 1962 to save innocent Ukrainian lives?

What happened to U.S. Secretary of State James Baker’s famous “not one inch eastward” assurance about NATO expansion in his meeting with Soviet leader Mikhail Gorbachev on February 9, 1990?

Indeed, in a Confidential Cable to the U. S. Secretary of State, former CIA Director Robert Gates’s criticized Europe and the United States for “pressing ahead with expansion of NATO eastward, when Gorbachev and others were led to believe that wouldn’t happen.”

A good start to the end of the Russian invasion of Ukraine is a written guarantee that Ukraine will never be accepted into NATO.

The longer it takes to reach an agreement the more innocent people lose their lives.