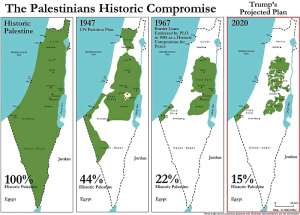 On the 21st of February, 2022 the world was gripped with the news of Russian invasion of the sovereign state of Ukraine. Condemnation, outrage and sanctions against Russia swiftly followed. While I join in the outrage and condemnation, I would like to draw a parallel between what Russia is doing to the Ukrainian people and the actions of the “State of Israel” against the Palestinian people.

Principles are very important when it comes to discussing the unfortunate Russian invasion of Ukraine. The world, especially the United States and Europe cannot continue to look the other way while Israel continue to perpetuate crimes against Palestinians by annexing large parts of Palestine, a sovereign state, in a fashion similar to what Russia is doing to Ukraine.

To put things in historical context, Donetsk and Luhansk declared independence some 8 years ago. However, before Monday the 21st of February, 2022, no nation recognized its independence.

Just like the Jewish claim to Palestinian land as their historical homeland, Vladimir Putin stressed that “Modern Ukraine was entirely created by Russia, more precisely, Bolshevik, communist Russia…” He added that “Ukraine for us is not just a neighbouring country. It is an integral part of our own history, culture, [and] spiritual space.”

Similar to the self-proclaimed Donetsk and Luhansk People’s Republics in war-torn eastern Ukraine, before the 14th May, 1948 you could not find the State of Israel anywhere on the World Map. It did not exist.

The ungodly “Balfour Declaration” through which the British government in 1917, announced support for the establishment of a “national home for the Jewish people” in Palestine started the illegal creation of the State of Israel on a land belonging to the Palestinian People.

The Palestinians have since not had a single day of peace. In fact, peace has remained an illusion, a commodity for the Palestinians to longed for but never to be attained. 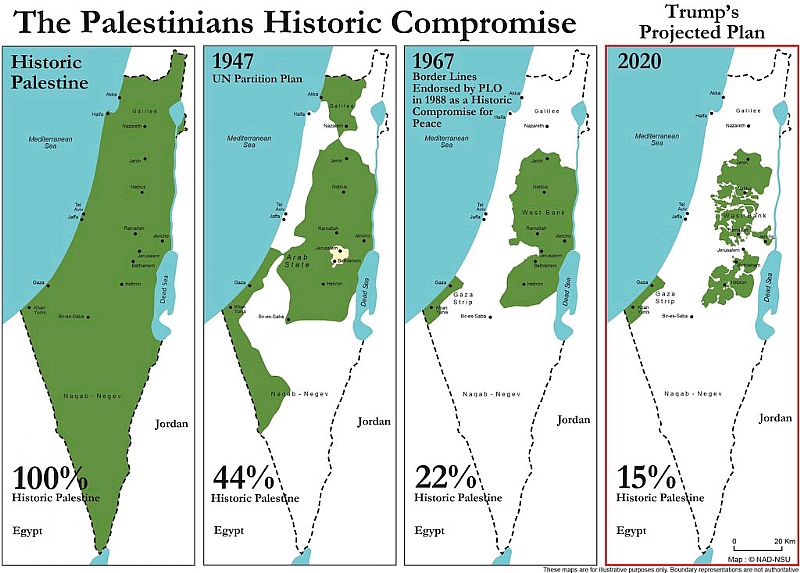 With money and calculated political alliance, Europe and the United States actively supported the criminal invasion of Palestine by the Jewish Zionist Federation to create a “Jewish State of Israel”.

Indeed, Israel remains the largest recipient of aid from the United States since World War II, receiving a total of $146 billion. As recently as 2019, the United States provided Israel with $3.8 billion in military aid - money and weapons used to terrorize innocent Palestinians.

Similarly, America has used its United Nations Security Council veto power 42 times against resolutions condemning the atrocities committed by Israel. In fact, 15 out of America’s 24 vetoes at the United Nations between 1991 to 2011 were used to protect Israel against calling it to account for the killing of civilians, including children.

As if that was not enough, to strengthen the hands of Israel to continue its illegal invasion of Palestinian land, the United States remain the only country to officially recognize Jerusalem as the capital of Israel and moved its embassy to the disputed city.

Europe on the other hand is Israel’s biggest trading partner. Giving it access to needed funds to develop and purchase lethal weapons to occupy Palestinian lands and terrorize innocent Palestinians.

Therefore, I consider the outrage and condemnation of the actions of Russia in Ukraine by both Europe and the United States as scandalous and hypocritical.

It is a fact that anytime Israel murders Palestinians and seize sovereign Palestinian lands, the best the Palestinian people got from Europe and the world at large is statements of condemnation and solidarity, without sanctions that could cripple the resolve of the rogue “State of Israel” to continue to commit atrocities against the people of Palestine.

Essentially, this inaction emboldens Israel to continue its annexation of Palestinian land and subjugation of the Palestinian people.

However, almost immediately after Russia invaded Ukraine, the world, especially, Europe and the United States has found its cane, swiftly imposing crippling economic sanctions on Russia and supplying Ukraine with weapons to enable it fight back the invader.

I am not holding breath for Russia, far from that. I am only asking for the State of Palestine to be given the same attention and support as Ukraine.

Sadly, the west and America rather continue to provide invader (Israel) with weapons, cutting-edge military technology and finance to keep on slaughtering and grabbing sovereign Palestinian lands, while Palestinian Territories of the West Bank, East Jerusalem and Gaza live under ruthless Israeli siege.

Where is the justice?

It has been reported that over 1.9 million Palestinians in Gaza have been subjected to aerial bombardment. As a result, the United Nations estimated that Gaza will be completely uninhabitable in no distant future.

Amnesty International, Human Rights Watch and several other Human Rights Organizations have detailed the crimes against humanity committed by Israel against innocent Palestinian people on whose land the Jewish people have forcefully occupied.

In an address to the United Nations General Assembly, delivered on the 6th October, 1963, Emperor Haile Selassie stated that:

“until the philosophy which holds one [country] superior and another inferior is finally and permanently discredited and abandoned… That until the basic human rights are equally guaranteed to all without regard to race; That until that day, the dream of lasting peace and world citizenship and the rule of international morality will remain but a fleeting illusion, to be pursued but never attained.”