Why Akufo Addo Imitates Houphet Boigny When Ghana Is In Dire Straits? 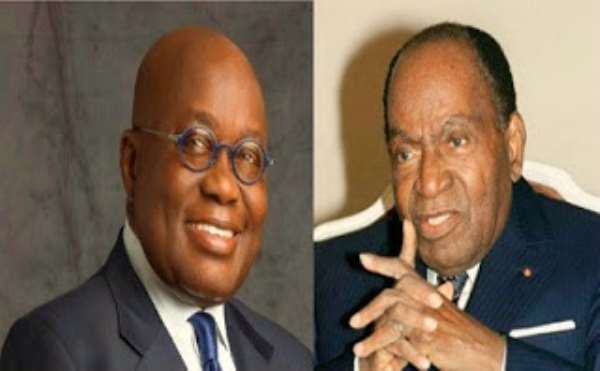 Successive Ghanaian governments are often criticized, accompanied by insults and the criticism has been particularly acute in relation to poor performance and rampant corruption. If the media is not behind you, definitely, you’ll lose favour. This is exactly what happened to the former Ghanaian leader, John Mahama, losing his second-term presidential race to political rival NPP.

It is obvious that Nana Akufo Addo doesn’t want to experience a similar fate, and therefore, would like to impress Ghanaians, starting with developmental projects. However, it worth to ask Nana Akufo Addo the significance of constructing of a 5000-seater national cathedral in Accra when hospitals have no beds, thousands of Ghanaians are unemployed

Is it true of what the white man says? According to white people, Africans are lazy and, therefore, always expecting miracles from heaven. We can’t ignore such degrading utterances because we have proved it to be true. Because it doesn’t really make sense for a government just to make an announcement that they want to build a 5000-seater Cathedral when the cost can be used to create employment.

Just imagine Ghana's poor sanitation, open sewage, and stinky gutters. Akufo Addo has ignored all of those problems generating malaria in the country and planning to build a Cathedral? May God give African leaders some wisdom to rule the suffering masses without building a Cathedral.

Nana now dreams big and wants to impress Ghanaians by imitating the late Ivorian president Félix Houphouët-Boigny. Houphouet-Boigny was ruling an impoverished country in dire financial straits, then like Nana Akufo Addo, one day he decides that it would be a good idea to build a second Vatican dome in his poverty-stricken hometown of Yamoussoukro.

In the mist of high rate of unemployment, illiteracy and excessive corruption, similar to the present situation in Ghana, an almost exact replica of St. Peter’s Basilica in the Vatican City, completed in 1989, measuring 30,000 square was constructed and named ‘Basilique Notre-Dame de la Paix de Yamoussoukro. The whole project cost the government 300 million dollars.

After the 30 acres of marble was delivered by an Italy firm and the glass also brought in from France, Houphouet-Boigny was asked how he is going to finance the church since his government was in financial straits, he replied “a deal with God has been done and all the 7000 seats are also individually air-conditioned.”

Three years after the Vatican replica was completed Houphouet-Boigny dedicated it to the Pope who consecrated the church in 1990. Did Houphouet-Boigny ever regret of such a religious investment in a country where more than two-thirds of its people aren’t even Christian? Why are African leaders wasting our resources in search for self-recognition?

Frankly speaking, in regards to the current economic turmoil in Ghana, such Cathedral isn’t necessary at all. It would not serve any purpose just like how Houphouet-Boigny’s African Vatican didn’t serve any purpose. Who is Nana Akufo Addo undertaking this project for, Ghanaians or himself?

If he is building it for Ghanaians, then I will remind him that Ghanaians need jobs and the sick needs hospital beds, however, if the building is to immortalize himself and his presidency then that philosophy will lose its significance and short lived.