Angela Merkel visited Ghana, and so what? 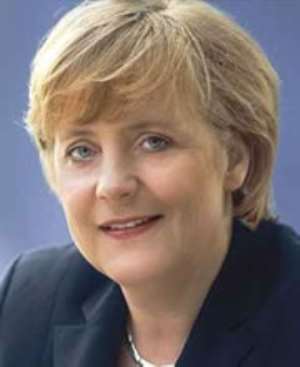 Folks, the German Chancellor, Angela Merkel, paid a day's visit to Ghana yesterday, which invokes sad memories of her country's predatory nature than building any bridge of trust between it and other countries, including ours.

Her visit is as hollow as can't be imagined. That explains why Akufo-Addo would be the trumpeter of her country's predatory move to establish a branch of the Volkswagen ("People's Car") in Ghana instead of her looking for ways that the Ghanaian government can get German assistance to promote local initiative so innovative entrepreneurs of Kwadwo sarfo Kantanka's type can reach the world market with their brand of automobiles.

Merkel visited Ghana as part of diversionary moves to shift attention from the pressure on her at home. How about the collapse of the coalition with minority parties that have kept her in power all this while? How about the xenophobia making Germany bad in the eyes of the world?

Her visit had nothing good for Ghana and should be dismissed as such. Even then, the thoughtless zeal with which Akufo-Addo paraded her around and touted her intentions to push the VW market wider should alarm Ghanaians about the sell-out.

It is not as if this will be t6he first time that Ghanaians and their country will have any brush with the VW brand. Several models have appeared in Ghana, especially the Beetle (that has ceased being produced and which Chinua Achebe ridicules in his novel _A Man of the People_ as a tortoise (already recorded in Ghana as such---and the fact that its engine is at the back and that it doesn't accept water makes it more penchant a laughing stock!!).

We are even not bringing in the international scandal that rocked the VW industry over gas emission improprieties and why the US fined it heavily in punishment. Everything boils down to the duplicity with which Germany does things (Should we recall how at the Berlin Conference in 1883/84, presided over by the then Chancellor Otto von Bismarck streamlined the scramble for and partition of Africa by the European powers and the devastating effects on Africa to date)?

Indeed, any thought or mention of Germany doesn't invoke anything pleasant. That is why no one should lionize Angela Merkel within the context of her visit to Ghana. And only a day's visit for mere diplomatic relevance, if anything at all?

History stands against Germany. It has a chequered history that makes it an anathema to those who recognize it for the Holocaust, not to talk about its escapades that sparked the disastrous Second World War and why it ended up being balkanized in consequence.

For many decades, it was virtually a pariah state despite all manouevres by its Western supporters who ardently capitalized on the Marshall Plan to boost its fortunes as the "German Democratic Republic" under Helmut Kohl while undermining the East German territory with Soviet backing as either undemocratic or totalitarian and backward.

We know all the hardline antagonistic politics done in the sphere of Germany that would bring out the Angela Merkels to behave as if the world owes Germany a debt of apology instead of the other way around.

The eventual breaking down of the Berlin Wall and forging of German unification (led by the United States under Ronald reagan) wasn't meant to undo the sordidness of the past but to portray Germany as a repentant criminal state, which it wasn't and hasn't declared itself to be all this while.

Reagan's emotional outburst to the then Soviet Union 's Mikhail Gorbachev to "break down this wall" remains a mere politically misguided stunt. The wall got broken down; but what has Germany done to prove that it isn't what it was seen to be in those days?

History says a lot. That is why Ms. Angela Merkel's own hold on power should strike deep chords of concern, especially given the heightening of xenophobia against foreigners from Africa, the Middle East, and elsewhere migrating to Germany.

Folks, in analyzing the German situation, we won't lose sight of the fact that Germany is a determined entity that is bent on going wherever it seeks to penetrate and do things to it's advantage.

Ghana is no stranger to the German influence. That is why I don't really value the visit of Angela Merkel's, more so when that visit seemed to be an escape route for her to bury her head in the sand all the more.

Late last week, social unrests verging on criminality and xenophobia occurred under her watch. Although she condemned it, the implications of such acts won't just evaporate.

So, visiting Ghana could just be a holiday package. Nothing to appreciate here, especially when we consider her utterances ((See https://mobile.ghanaweb.com/GhanaHomePage/NewsArchive/Germany-likely-to-put-up-car-manufacturing-plant-in-Ghana-Angela-Merkel-680946):

1. Angela Merkel described Ghana as a “vanguard” of democracy and political stability. (What that means, i don't know. "Vanguard" in what context? For leading the struggle for independence and what-not only to be frustrated by superior forces of Germany's kind?)

2. She said Ghana has received best grades for the peace and stability it has recorded so far but said there was room for improvement in the country’s fight against corruption. (Grades given by whom? The school masters in global mischief and hegemony, including Germany? Who appointed them as such?)

3. She said her country will work together with the Akufo-Addo led government in the fight against corruption, adding Ghana has made progress since the coming into power of the NPP government. (Very vacuous. What will Germany offer Ghana in the fight against corruption? We know of politically motivated German institutions (Friedrich Egbert Foundation or something going by a name sounding like that which was more of a spy institution than an ally to move Ghana forward. And it has been so dormant for many years now as to make us wonder whether it is still being funded by the German Establishment)

4. She called for more transparency in the tax administration in the country. (Another vacuous statement, despite its huge political undertones. The meaning here is that she has noticed a monumental failure and is being diplomatic in pointing it out. What specifically Germany can do to plug the holes is up in the skies!!)

Interestingly, even though Angela Merkel's visit might be aimed at seeking investment opportunities for Germany, she was not the one to announce it.

At a time that Sarfo Kantanka and other Ghanaians are expending energy and resources to put the Ghanaian on the world stage with innovative vehicle manufacturing efforts, why clip their wings by establishing a hub of the VW industry in Ghana?

And to imagine that the Akufo-Addo government that proclaimed it's manifesto of partnering with the private sector to grow business will shun Kantanka and their entrepreneurs to the advantage of foreign competitors is disheartening.

Has our Kim old, rabid dog not gone mad again?
What happened to the German-owned Neoplan company that got established in Ghana decades ago?

Who is learning the lessons that history teaches? Why has Angela Merkel chosen Ghana as her destination? More questions than answers, folks. I don't trust this coo-coo business going on here.

Just as the Jews who sacrificed one of their own (Jesus Christ) asked: "What good can come out of Nazareth?" so will we in our Ghanaian context regarding the perils of colonization under the guidance of Germany and its Otto von Bismarck be more than happy to ask what good can come out to us today under an Angela Merkel, a grand descendant of the bulldozing Germany that doomed us centuries ago but is now seeking fertile grounds to redeem the German self? MORE THAN SCARY. Full stop here for now!!

If she has already departed the shores of Ghana on her "kite business", good luck to her. Ghana won't remember or miss her when history plays its proper role.

Joseph Yamin to clear weeds in all abandoned Mahama projects...
58 minutes ago