Where is the "change" that Ghanaians voted for at Election 2016? 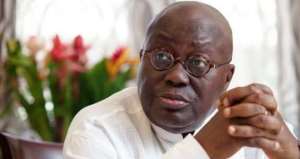 Folks, everything that has happened under Akufo-Addo thus far says a lot to prove that the political rhetoric of "change" that the NPP used to win political power hasn't really changed anything in Ghana for the good of country and people.

The "change" that put Akufo-Addo in power is sterile and painful for as much as it replicates horrid happenings that motivated Team Akufo-Addo to seek the nod of Ghanaians to be in power in the hope that he would administer affairs to change the paradigm drastically.

Thus far, nothing has happened to confirm that Akufo-Addo's being put in power is capable of changing the paradigm to give Ghanaians what they haven't seen or felt before. It is disgusting, considering how much capital went into the politicking to Akufo-Addo's advantage!!

A lot has happened to prove that the clarion call for "change" that motivated voters to reject Mahama despite the glaring evidence of his use of resources to bring government to the doorsteps of the people and to construct projects dear to their hearts won't serve their needs and purposes.

Folks, I am trying to tease out meaning from the politicking that caught Ghanaians off-guard just on the basis of "change". Nothing emerging from Team Akufo-Addo has proved that the change effected at Election 2016 is justifiable.

The cost of living is rising, the national economy is tumbling and wobbling despite all the ugly noise that Bawumia and Ken Ofori-Atta are making all over the place that all is well.

The banking sector particularly is on its knees (as we can see from what has unfolded thus far with the collapse of banks that operated successfully under Mahama but have been destroyed under Akufo-Addo to prove that Bawumia has no clue on how to stabilize the economy despite his puerile and over-exaggerated stance as a "whiz-kid" when he was petulantly damning Team Mahama in the aggressive move to win voter support. His numerous questions to the late Paa Kwesi Amissah-Arthur are staring him the in the face. Shameless opportunist!!)

Folks, there is too much swaying me now. Let me return to base to say that the "change" that the 53 point something per cent voted for isn't happening just because Akufo-Addo didn't have any clue on what that "change" was and still is.

If he did, he would have been the first to introduce paradigm-changing measures to move Ghana where it would be.

No drastic change has occurred in the institutions of state to make them functional (the judiciary, for instance, is still weak and its analogous institutions are mired in the rot that has existed all these years such that cases continue to drag in the courts).

No institution of state has seen any change in the way it does things. The status quo ante is what exists, which explains why Akufo-Addo isn't effecting any change. The rot thickens. How can Ghana make progress under such a sterile system?

Let's land here. Bluntly put, all that Akufo-Addo is doing is a horrible copycat business that won't move Ghana out of the woods.

He is now all over the place, praising China as a model for Ghana to emulate. Meantime, nothing has come forth from China to prove to Ghanaians that it is poised to help move Ghana forward. I have read many news reports about how Akufo-Addo is whitewashing China as the model for Ghana to follow so it can become developed!! Tweeeeeeeaaa!!

Was that what the Ghanaian voters went for at Election 2016? Akufo-Addo and his gang of political marauders damned the late Mills for going the China way but are now touting the Chinese model as the best option for Ghana's path toward self-development (Let's not even bring in what the anti-Nkrumah elements said and did in the very camp that Akufo-Addo is highlighting today as a model).

Folks, a lot on my plate at this point. What exact "change" has Akufo-Addo brought about in Ghana? Nothing.

Just a copycat business (having already disgraced himself as a plagiarist at his own inauguration into office and not apologizing for it just he did when he stole academic/professional credit to emerge as a lawyer without a qualifying certificate but is still being supported by the fogeys of the sort that Ghana doesn't need in this century!!).

Let me cut the chase here to say that what is unfolding under Akufo-Addo is horrible. If that was what the Ghanaian voters opted for at Election 2016 when Akufo-Addo and Bawumia led the team of campaigners for a change that Ghana won't have and hasn't had after the removal of Mahama from office, they shouldn't be complaining about the high cost of living under Akufo-Addo.

And Akufo-Addo will be the most stupid political leader to agree with these constituencies that there is suffering in Ghana (as published). Yet, he agreed with them. So, what "change" has he brought about to invalidate the NDC (Mahama) order? Where is the change, after all?

What, then, is the rationalization? If Akufo-Addo was voted to solve problems and move Ghana beyond the level that Ghanaians detested at the time, why are Ghanaians still complaining about the very hardships that made them push Mahama out of office?

And so, where is the change, after all? More to talk about when it comes to "change" in terms of voter appeal or otherwise, which should make a huge difference between what has existed before elections to reject the non-performers and to embrace those to introduce paradigm changing mechanisms.

The truth is that Akufo-Addo has nothing to offer in changing the paradigm in Ghanaian politics. If he has, he won't be running a "family-and-friends" in government business as if that is all Ghana needs to make the break.

Those who know it, know it. Fools die.
I shall return.