This “National Cathedral” thing exposes Akufo-Addo's cluelessness all the more... 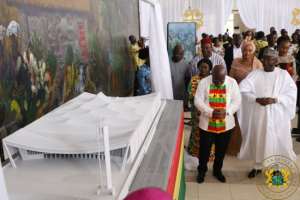 Folks, no doubt exists that the investment being made in the "National Cathedral" project by Akufo-Addo and the conclave of NPP lackeys in cassock will thicken over the period. Much has already emerged to indicate that such a project is not only misplaced but it is also a clear demonstration of paralyzing cluelessness, especially on the part of Akufo-Addo.

At a time that public outcry against inadequate resources in every sector of national life is hitting the roof, a responsible leader won't turn away to seek redemption in a "National Cathedral" to "thank God for what he has done to Ghana"!!

What has God done to Ghana that he hasn't done to other countries? Just because Akufo-Addo hid behind the loud cry of "The battle is of the Lord's" or because he managed to gather around him the "Men-of-God" thinking as he does to push his electioneering campaign agenda for the gullible electorate to support?

Folks, it is clear that Akufo-Addo is detached from reality and is running around in circles. Like a tail-less kite, he is gyrating up there in the sky. We expect him to land, belly-up. Ghana is established and recognized/respected as a secular state. The implications are clear to us that doing what Akufo-Addo has initiated smacks of divisiveness and irresponsible behavior---a tendency to provoke instability on the basis of religion and the government’s preferential treatment of so-called Christians under the auspices of this “National Cathedral” humbug.

Here is the grim picture. First, countries that seek to make progress take practical steps to separate the state from religion (the church, particularly). Almost all the countries that have made progress ensure that religion doesn't influence how state business is done, knowing very well what the danger is.

(We may want to say here that countries in the Muslim world can be removed from the equation, especially where Islam is the foundation of everything and respect for the "Sharia" is non-negotiable. Even then, there are limits.)

We are talking about countries, where Christianity prevails and is privileged, especially in our Ghanaian situation today. Once the evidence exists that the state can't be separated from religion, danger looms.

Next comes the practical reality of the Ghanaian condition. With all the daily complaints about lack of facilities at all levels (be it in the sectors such as education, health, food (in)security, (un)employment, etc.), what should be the priority of the government to solve existential problems?

Building a "National Cathedral"? My heart bleeds. And to be given the facts surrounding this particular project when structures housing people and institutions will be demolished?

Nothing anybody in this useless government or misguided clergy says will persuade me that this "National Cathedral" thing is required. Many terrible issues about it have to be pondered: Who will own or manage it? The government or the churches (Which of them)?

It must be noted at this point that a "Cathedral" of the kind to be constructed is fundamentally problematic for as long as it won't solve problems that hurt Ghanaians materially.

We know of prominent "Cathedrals" (e.g., the St. Peter's Basilica in the Vatican City and the one built by the Ivorian Houphouet Boigny in Yamossoukro (or is it Bouake?) when he had one foot in the grave).

Specifically, these "Cathedrals" belong to the Catholic Church. What will be the status of the one that Akufo-Addo wants to build? I can foresee danger here in terms of ownership. Why should the state want to build it and own it, even as it leases it to applicants wishing to use it for whatever purpose? Things are not adding up well here.

If the government could turn attention to the practical needs of the people instead of fumbling and bumbling this way, every reason should exist for it to knock out the NDC in the very first second of round one at Election 2020.

But it isn't acquitting itself well at all, which is good news for those of us who know that their loud boasts aren't nothing but strategies for blindfolding Ghanaians and stealing all that they come across.

I just don't know what to make of it at this stage but to dismiss it as an irritant to be ditched by any means possible. If building a "National Cathedral" will solve the existential problems of Ghanaians, fine; but it won't, which is why I am out on all fours to punch the old and rabid Akim dog this way.

In matters of religion and faith, the government's only role is to ensure that no religious denomination does anything to ignite social unrests. It has to provide the security for the people to worship their God the way they want to, not to waste money, building cathedrals for only a segment.

The bottom-line is that this "National Cathedral" thing is a cheap means to do politics. It won't win any political currency for Akufo-Addo. Neither will it touch "God's heart for any favour. It is a misplaced priority that must be condemned.

But in a system where the unconscionable politicians find comfort in the company of the lying, thieving, and murderous clergy, nothing can turn them back once they unite to dupe the citizens. Too bad for Akufo-Addo to be pushing the button this way. But what else should we expect from him? An overly cheap man looking for cheap popularity!!

Joseph Yamin to clear weeds in all abandoned Mahama projects...
48 minutes ago