Can The Civilized World Coexist With Islamic Fundamentalism? 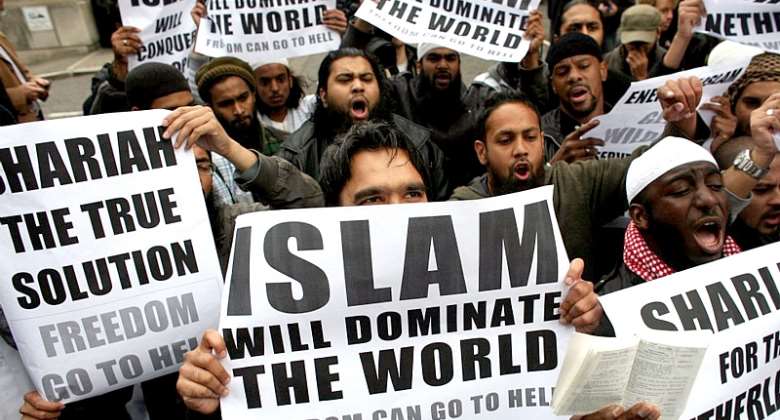 One of the most disturbing scenes I have ever seen on the internet was a video footage of the callous and gruesome murder of a young woman at a location in the bush somewhere in Northern Nigeria. The doomed female was dragged into a wooded area by a bunch of men who looked like a mob fanatically enforcing the laws of Islam.

After a lengthy interrogation of the terrified and crying woman by her captors which presumably passed for the Islamic equivalent of judicial proceedings, she was laid down on the ground even as she begged for her life, then a knife was put to her throat and her head was sheared off in cold blood, not unlike how a cow or a sheep would be beheaded in a slaughterhouse. It was probably one of the most grotesque examples of human beings descending to the level of animals. The poor woman's crime allegedly was adultery, which, under the so-called sharia law, carries the death penalty for women - but only for women - by either beheading or stoning.

The blood-curdling image I witnessed in the video highlights a very ugly aspect of life in those parts of the world where the Islamic fundamentalist ideology takes precedence over secular statutes.

The cruel and barbaric punishment is not limited to adultery: indeed, it is the norm for a whole catalog of infractions, many of which may not even merit a prison sentence in the Western or civilized world. For example, in Sudan right now a young woman is sitting in jail awaiting execution by hanging for daring to defend herself against a rapist, whom she fatally stabbed, which was her only recourse to avoid being raped - an ordeal she had endured repeatedly before at the hands of the same man whom she had been forced to marry.

Perhaps the most lenient form of punishment - compared to being beheade6 or burned alive - in these countries is the mutilation of offenders, whose limbs would be hacked off, which often is the price one pays for nothing worse than petty thievery.

When the adherents of Islam defend it as a religion of peace, it is hard to contradict that claim because most Muslims are peace-loving, God-fearing and law-abiding people wherever they happen to be, like the followers of other faiths. At the same time, the idea that Islam is a peaceful religion is a little difficult to fathom, given the propensity of the Islamic fundamentalists

for shedding the blood of innocent people at the drop of a hat, which they always do amid chants of Alahu Ahbar (God is great). In other words, they praise God while committing murder. It doesn't get more surreal than that.

Besides the gory acts such as beheadings and mutilations, nearly all terrorist attacks around the world nowadays are carried out by Jihadists or Islamic fundamentalists whose activities are a throwback to the Dark Ages when the sword of the caliph reigned supreme and barbarism was rife. The ultimate goal of murderous groups such as al-Qaeda, ISIS, Boko Haram and al-Shebab is to turn back the clock of civilization a thousand years.

Needless to say, the activities of the Islamic extremists have succeeded in making people all over the world jittery in public places. Air travel, for example, has become a very risky undertaking because airplanes and airports are prime targets for terrorist attacks. So are train stations, sporting events. shopping malls and music festivals or concerts. People these days increasingly feel like they are taking their lives in their hands whenever they venture outside their homes either to go to work or take care of everyday chores.

And mostly as a result of the sense of public insecurity generated by the activities of the extremists, anti-immigrant sentiments in both Europe and the US are on the rise, tipping the scales of political power in some countries in favor of right-wing politicians who historically have always been hostile to immigrants.

What are the options for combating this demonic threat to the peace and security of the world? Unfortunately, there are precious few viable options. Unlike an earlier global peril in the last century when the armies of the fascist dictators in Europe and their allies elsewhere who were bent on world conquest and domination were met head-on on the battlefields and decisively defeated, the contemporary enemies of world peace are mainly faceless and cowardly albeit deadly non-state actors who usually pick off their victims and quickly disappear into the shadows. They don't lend themselves to conventional warfare, which makes fighting them extremely frustrating.

But the international community could exact retribution on the terrorist-sponsoring nations, although just how effective it would be remains an open question. Countries like Iran, Saudi Arabia, China and Russia, among others, that are the major armorers and bankrollers of the murderers, should be made to pay dearly for their sponsorship of evil through crippling economic sanctions.

One way or another, there should be measures to counteract the danger posed to life and limb throughoutthe world by the Islamic fundamentalists. The never-ending carnage being inflicted in the name of Allah must be brought to an end.