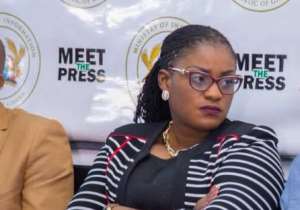 Whoever pebbles the other ask for rocks in return, I am outraged at your foolish claims on your facebook wall superincompetently stating that Maada Bio and Uhuru Kenyatta rigged the Sierra Leone and Kenya elections with the help of former President John Mahama. I don’t get it ooo. Really?

Until this your foolish comment I never knew you are even one of the 110 superimcompetent gang being fed with our money for little or no work by Oga Titus.

The lizard who jumps from the iroko tree says it will praise itself if no one does. This is what you have done but in an awkward manner. Since you were appointed one of the numerous superincompetent deputies to the superincompetent Misinformation Minister, Mustapha Hamid, I have never seen or heard you work. I only know you draw salary. That is why I am not surprised you have gone blindly on facebook to sell your superincompetence to the world. How Pathetic!

Let me forgive you because your appointment itself is an unfortunate event. Your superincompetent President is on a diplomatic goof spree so I don’t expect a superincompetent offspring of his to do anything wise. Who told you to dabble in the diplomatic arena reserved for only wise and competent men? What competent evidence do you have to support your senseless tirade? John Dramani Mahama is a quintessential gentleman with pearls of wisdom in diplomatic business; he's a 'god' don't you know this?

Oh, I get it now. Your superincompetent government is still reeling under the ignominy of the deportation of your rigging team, Joe Anokye and Peter Mac Manu from Kenya. Ha ha ha ha haaaaaaa!. When the NPP hacked Ghana’s Electoral Commission website was there tumor in your brain? Maybe you have charcoal in your head!

As a deputy information minister, it is your job to be explaining the superincompetent military agreement your government entered and sold our sovereignty cheaply to America. Your superincompetent President came to waste our time on television telling us of his arrogant anger. You are not minded to control the damage he caused with that worthless speech. I didn’t watch him thought, embanor; that would be sacrilege, I joined Baba Mensah Otabil, the Animals movie director in watching Animals on Animals TV.

Enough, the next time you intend to open your mouth on facebook be warned that it is a public place. You have bathed naked in public; no woman does that. You disgraced your husband because of a superincompetent party you belonged to.