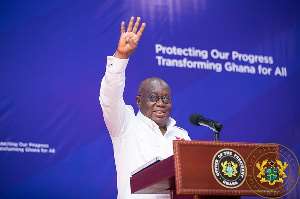 After failing to deliver its 2016 manifesto promises to Ghanaians, the governing New Patriotic Party (NPP) over the weekend launched what clearly could be called a boring utopian thesis as its 2020 manifesto at Cape Coast. The grandiose event was expected to present new ideas different from the failed promises and poor performance of the party in 4 years but Ghanaians were left with the same old stale soup. No wonder the nation was nonchalant about the so-called manifesto already; they are wary of the ‘kwatrikwas’ promising cloth again!

The document is replete with the recent town hall presentation of Bawumia which is struggling to find its feet under scrutiny and ended with lame unmeant promises to deceive the electorate again. In fact though not surprising, the thesis mentioned former President Mahama 1,039 times as the NPP sought to be blame him and the NDC for their underachievement.

Having failed to execute its promises, they went into throwing another set of academic promises to deceive the public again.

Realizing they did nothing for the people of the Central Region, NPP now claims it is going to build a harbour and a new airport in the region at Cape Coast. Deep insight will tell everyone NPP never meant this but is rather fooling the chiefs and people in the region. Takoradi is just a few kilometres from Cape Coast and has a harbour already. The NPP in 2018 passed an Executive Instrument to establish a harbour at Keta. Two years later they have only an appointment of a Director General for the non-existing port to show for it. Cape Coast will take a cue from this and forget about this rhetoric.

Then there is a promise of seed fund of GHc100million to start a National Rent Assistance Scheme (NRAS). The NPP has completely depleted the national purse and borrowed so much without showing where it went. Four years in government they are now thinking of such a move in collaboration with the private sector. It is already indicative of not happening since it is going to be an expensive venture unaffordable to many. The new Rent Control Act being drafted remains a thought with no help for the poor. How many poor people can afford a structured loan for rent? There are affordable housing schemes like the Saglemi Housing Project which the NPP left to rot. Should we not complete them for the people instead of new ones yet to be conceived? Ghanaians needs sustainable jobs not deceptive rent allowance that will never be realised.

Security and safety is of little concern to the NPP because they want to provide freedom for their thugs to operate. This contrary to their 2016 promise of enforcing our existing criminal laws to make Ghana safe for the masses. The reality is that, today criminals are protected by Nolle prosequi, miscreants are encouraged by subtle executive order. Our courts are threatened, only God can save us I dare say !

Following the killing of police officers at Kwabenya police station, the Vice President promised to install closed circuit television (CCTV) cameras in all police stations in the country. This remains a hoax till now. Many policemen have been killed on duty, the NPP has no solution to it. They are satisfied with their illegal vigilante groups taking over the job of the security forces as we saw in the recent voter registration exercise.

After failing woefully on the promise to ensure the election of MMDCEs, the NPP in kwatrikwa style is promising again to amend Articles 55(3) and 243 of the constitution to allow for election of MMDCEs on partisan basis. They promised this in 2016 and came to twist everything badly causing financial loss to the state. It remains to be seen how they will embark on this one provided they get the impossible second term mandate they are seeking.

In the energy sector, the NPP admitted Mahama solved the energy crisis and ensured even excess power availability but the NPP does not know how to manage it. The more power in the energy mix, the more headache they have yet go around deceiving the country that Mahama did not end dumsor before he left office.

Laughable pledges were made to fight corruption. “We will continue to improve institutional and legislative reforms started in our first term to strengthen the capacity of governance and anti-corruption institutions to deter, detect and prosecute corrupt activities.” The reality on the ground suggests the opposite. Currently the Auditor General’s arm is deliberately being twisted to prevent him from detecting, deterring and prosecuting corruption in the country because the NPP kingpins are embroiled in it. Likewise the Special Prosecutor is a white elephant being kept in a cage, he is given hoaxes to manage but not to fight any political corruption.

Many corruption scandals occurred under the NPP but none has been allowed to be prosecuted. The Metro Mass Scandal was reported to the Special Prosecutor but the Presidency whisked it away from him. The BOST, KelniGVG, GCMC, NYA and other scandals remain unattended to. The Auditor General was forced on a presidential leave because he was detecting the fraud in the Kroll & Associates $1million payment for no work where the senior Minister Osafo Maafo is obviously culpable.

Power Distribution Services, Agyapa Royalties Ltd, Ameri Review Contracts all passed under the so-called anti-institutions meant to check the fraud within them. The Zongo Development Fund just witnessed over GHc5million theft from it by its Chief Executive Officer without notice. The CEO of the Public Procurement Authority himself is compromised and unable to perform its duties in order to avert these state capture being manufactured from the Jubilee House. The Inter Ministerial Committee on Illegal Mining right under the nose of the President engaged in a mafia operation to loot and share. Even huge excavators went missing under their auspices.

The most ludicrous claim of the deceptive manifesto is their claim to prudent borrowing. In fact everyone in the country knows NPP’S smart borrowing is tantamount to borrowing for hot meals. Over USD140million was borrowed in just three and half years with little to show for. Loans for consumption has taken the country to HIPC levels shamefully. With the fraudulent mortgaging of our royalties for 15 years, the NPP will need miracles to convince us of any competence in financial management to warrant giving them another unfortunate term.

The other trivial promises which the NPP themselves are not sure of by the way they are captured need less attention to waste anyone’s time. What is important is that the NPP has run out of steam, they need to give way in December, 2020. Ghanaians must remove them from power to save this country.