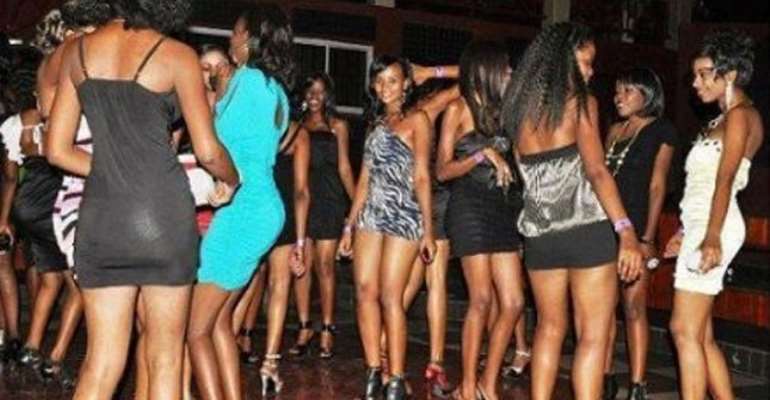 Whoever gathers untrodden faggots should expect the visit of lizards. Wondering why there is increased crime in Ghana? Blame Nana Akufo-Addo for the increasing crime rate and acts of prostitution in Ghana. The NPP government’s poor handling of galamseyers is largely responsible for the growing rate of crime and prostitution in the country these days.

Many of our village youth in the southern part of this country largely depend on galamsey for their survival. Galamseyers are very well to do and extremely extravagant in their spending. They as well have a debauchery lifestyle; excessive indulgence in sex, alcohol, or drugs. They are always well armed too, maybe we have to tackle the numerous illegal possession of arms cases we currently find ourselves in as a country.

Galamseyers pollute our water bodies anyway, but shouldn't we find an alternative solution to this rather? The erstwhile Mahama government outlined interesting policies in his government’s quest to fighting the galamsey menace; brilliant ideas they were which included regularising the operations of galamseyers. His policies however, couldn't see the light of day because of the nature of our Ghanaian politics. I'm talking about the smallness of our politics; the ease at which we're distracted by petty and mindless politics, the desperate rate at which Nana Akufo-Addo, the then opposition leader wanted to score cheap political points instead of selflessly contributing to fighting this social canker.

He quickly toured mining communities and instigated them against John Mahama’s government. He gave them unrealistic promises. He told them he will allow their operations if they help in making him President, which they fell for his canny tricks. They did not only campaign and vote for the NPP, but they funded his campaign too with huge sums.

The reality is here; Nana Akufo-Addo had to face the reality by departing from his promise to galamseyers. His incompetence and cluelessness is however, legendary. What alternative did he provide for these galamseyers after introducing a ban? The wise men in the government have recommended they should be shot and killed! Death is the reward for sponsoring Akuffo Addo to become President. The galamseyers are now left to their fate. After spending all their savings, and not having any alternative of surviving what happened? Mass robbery with their ammunitions. The village ladies who were also beneficiaries of the galamsey booty must also survive; wondering how? Your guess is as good as mine.

So quite apart from the radicalization of the NPP youth by Nana Akufo-Addo and the numerous dismissal of workers immediately after assuming political power in January 2017, Akufo-Addo's clueless handling of galamseyers is responsible for the numerous robbery cases the poor masses are suffering from today. As for how I arrived at the radicalization of the NPP youth; criminals from Serbia and South Africa were brought into Ghana to train the NPP youth how to win elections on the streets and we all still remember that.

Another heartless directive has been enforced to evacuate the President’s Nima residence neighbors. To where? How do they survive we don't know. These poor artisans and traders have been left to their fate. Expect some prostitutes and armed robbers from these poor evictees soon. The crime rate we are currently confronted with is a miniature of the microcosm we must experience in the coming days.

Ghana is on a time-bomb waiting to explode. Nana Akufo-Addo and his NPP biggies who are following him as if they are congregants of followers of mother Teresa are responsible for our security predicaments.

Nima is large enough to contain President Akuffo Addo and his Nima Neighbors. It has contained them before and as to why it can no longer do now, I wouldn't know except to say levels have changed. Nana Addo is now a big man. Let the Kite perch and let the Eagle perch too is all I can say for now. If one says no to the other, let his wing break is what we must do going forward.

The greed of any represents the suffering of many my fellow Ghanaians. The greed, lies, nepotism, incompetence, and corruption of the current regime is legendary.

Our challenges are really fearsome but may God bless our homeland Ghana and make us forever bold and strong to prove our resilience.