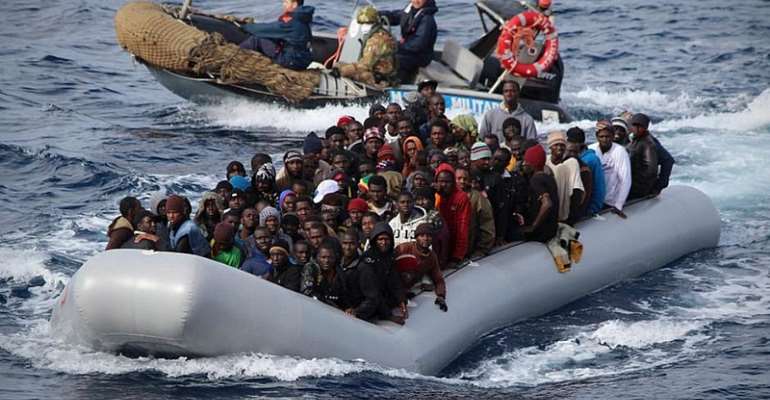 Many years ago, during the first five years of my sojourn to Port-Harcourt Nigeria, one of my relations named Okezie visited to request I help him procure international passport. He so desperately wanted the passport to facilitate his trip to Italy. Before then, he operated a small shop at T-line Ariaria International market Aba, a major commercial city in Nigeria, where he made and sold ladies handbags.

When I counselled him otherwise, sensing that his business will do well if he gives it the required attention, he left my house with anger. I later heard that he sold his shop equipment, house furniture, added it to the refund of his unused rent and hit the road with Ifedi and Lotanna his friends. They travelled to Lagos and joined a group of other young people numbering up to thirty, led by the member of a group that claims to help young people travel to Europe to find jobs and make a living. They were promised a job as soon as they made it to Italy and a monthly salary of close to a million naira.

According to Okezie, the two-day journey from Chad to Libya across the Sahara desert was life threatening and six of them were either killed by militants who are occupying the vast but ungoverned space. Night movement by boat across the Mediterranean Sea proved worse than the long trek through the desert. Eleven persons died in the process including Ifedi. Only thirteen of them made it to Italy. They were accosted by an immigration patrol team, arrested and dumped in a refugee camp. The cartel used their connection to get the already trapped illegal migrants released to them one after the other.

Okezie escaped from the refugee camp, outside their knowledge, worked as a cleaner in a brothel for two weeks before relocating to Germany by the help of an old school mate who was already residing there. He worked briefly in a construction site in Germany before he was spotted by immigration team and arrested. He however resisted them heavily and later died in detention two days later of injuries sustained during his arrest.

Okezie’s story is similar to that of most young Africans who have become grossly dissatisfied with the poor state of their nation’s economy. Their attraction to Europe is extremely compelling, as stated by an old adage, “If you don’t like where you are, move, you are not a tree.”

Africa is not the first continent to experience prolonged economic degradation. Modern history has it that in the 14th century, Europe suffered an unusual economic catastrophe which forced them to navigate to Africa and other parts of the world in search of greener pastures. The difference was that our fathers, good spirited as they were, did not demand visa before letting them settle down to build large farms in the present day Kogi state in Nigeria, Cape Town in South Africa and all over Zimbabwe. They rather subtly endeared themselves to our people and later betrayed their trust, invoked fire power with which they overpowered and ruled them for centuries.

Migration occurs when people move from one place to the other with the purpose of settling down in the new location. Among other things the reality of globalization has increased in no small measure, the motivation for people to migrate from one region to another as observed by Paul Murray, “Modern life is a centrifuge it throws people in every direction.” People migrate for several reasons which include finding a job, searching for better living standard, escaping from political persecution, war and natural disaster. Whereas people migrating for greener pastures make conscious choice to do so, those in areas devastated by war or natural disasters or suffering from political persecution are usually forcefully displaced from their homes. Truly speaking, “No one leaves home unless home is the mouth of a shark.” so said Warsan Shire an English poet. In most cases such regular citizens who usually have no hand in the series of events that caused the conflict suddenly become refugees seeking for acceptance in the next available country.

In-spite of existing laws in the EU primarily set up to protect refugees, in reality refugees are constantly harassed, dehumanized or sometimes killed. In the words of Ban Ki-moon, former United Nations secretary general, refugees need not be so treated. According to him, “migration is an honest way of expressing human aspiration for dignity, safety and a better future.” Indeed, everyone would love to migrate through the right channels but for the rigorous process and prohibitive cost. At present it cost over $15,000 to send a young adult to Europe for a one year educational program. Conversely, the consequences of migrating through outlawed channels are extremely disastrous and people end up paying with their lives.

Despite the risks, over 440,000 migrants are estimated to have travelled from Africa to Europe through outlawed channels from 2000 to 2005. Most of them being potential sex traffic victims. According to International Organisation for Migration (IOM), the number of sex traffic victims that arrived Italy through the Mediterranean Sea reached 71,000 an increase of 14% from 2016. Incidentally 80% of them are Nigerians, while majority of those Nigerians are from Edo state.

Recently, 26 girls from Nigeria were found dead at the Mediterranean Sea in a single day, bringing the sum of the migrant death this year to 3000. There is also celebrated news of many young Nigerians who got stock in Libya and were practically sold into slavery after they were tricked into making an illegal trip to Europe via Libya. Some of them are presently being deported, while a handful confessed to preferring their condition to the unending gloom and joblessness they suffered while in Nigeria.

Africa has no future if she continues losing her brightest to such a man-made tragedy. As a people we must re-engineer our young ones to accept our age long value system that supports making a living only through decent means. They must be told to sell their talent but never to put a price tag to their soul as they are presently doing. Our leaders must come to their senses and consciously rebuild Africa so it can become attractive to our younger generation. Since they have failed to create jobs, they can establish an agency to redirect the efforts and career of their citizens to fit into overseas jobs and coordinate their travel to the western world. This way, more and more Africans will begin to make a living abroad and return later to invest in their country. The world leaders including the EU must give the new generation of Africans a chance, rather than shut their door against them; they should treat them as humans that they really are.