‘Yahoo Boys’ In Police Grip: Are Our Neighbours ‘Noisy’? 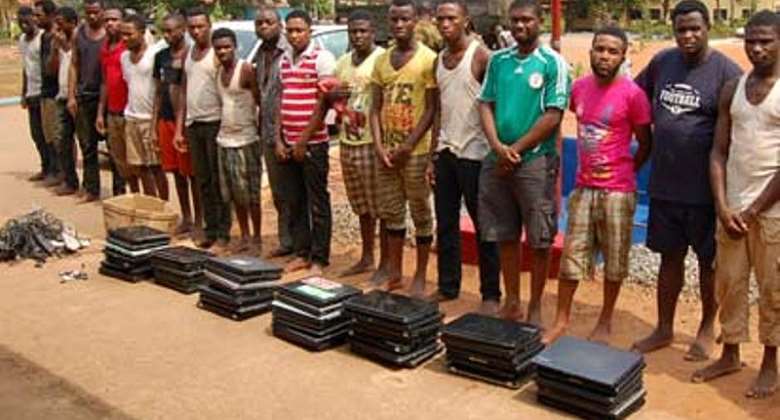 When hyenas go rogue only the hunters can stop them, only the men with guts. Their booty spread all around them. Their greedy eyes search for more victims. Unbeknownst to them, the hunters have taken cover and would soon close in on them.

On Saturday 26 August , 2017 the Madina Police Command in Accra Ghana arrested 26 suspected cyber fraudsters known as ‘Yahoo Boys’ all believed to be Nigeria nationals. Twenty-six (26) mobile or cellphones and 33 computer laptops including an unspecified number of flash or pen drives were retrieved at the crime scene.

The police command say all the gadgets have since been handed over to the Cyber Crime Unit of the Ghana Police Service for further investigation.

A tipster’s piece of information to the police led the arrest of the ‘Bad Boys’ around 1pmGMT in that hush afternoon, according toDivisional Crime Officer, Superintended Joseph Oppong. He told the local media that the operation would be sustained until the menace was drastically reduced. All the suspects were busted in a single large room, the media learned.

“They’re well versed in this cybercrime. And because of their activity in Ghana the whole world now thinks that cybercrime is a Ghanaian disease. This is why we need to fight it ruthlessly until it’s reduced if not eliminated,”said Mr. Oppong.

The police chief also appealed to the general public to volunteer information, adding it could be helpful to the community and the nation at large.

What isCyber Crime?
Cybercrime also known as Internet fraud has manifested in diverse ways in recent times. But not only that its rise has also reached an alarming proportion causing great concern around the world. Cybercrime consists of different types. They include Identity theft, hacking, stolen bank accounts, and stolen online passwords. There’s also phishing andcyber stalking. Yes you heard it right. You can be stalked like Mary and her little lamb... Internets are used for terrorists’ attacks and bully students and school pupils.

In fact the statistics on cyber bullying and suicide are disturbing... “15 per cent of high school students (grades 9-12) were electronically bullied in the past year. Suicide is the third leading cause of death among young people resulting about 4,400 deaths per year, at least 100 young people attempt suicide and 14 per cent of high school students considered suicide and 7 per cent have attempted it.”

Studies have also have shown that ‘the younger they are the more likely they will attempt suicide.’

With regard to cyber financial crime possibly billions have been lost over the years from individuals, multinational corporations, institutions to governments. In 2016 US retail giant Target lost over $US 40 million when hackers hacked into their system.

Where do cybercriminals based?
Cyber fraud is now widespread. The fraudsters are like chickens and can be incubated everywhere.They’relike brats found every parts of the world. They’re born in cities and born in hamlets. They’re in China, Russia, the United States, India, Nigeria, Saudi Arabia you name it.

Indeed Ghana is faced with the conundrum of trying to woo many Nigerian investors as much as possible to inject heavy capital into its economy. But she’s also not oblivious of the fact the ‘freight doesn’t always come as expected. There are bad nuts that fall through the cracks and it’s often difficult to crackdown on such miscreants.And of course you can’t put the blame solely on Nigerians. There are also Ghanaians who indulge in cyber fraud.

The West African nation is notoriously known forcybercrime .And I’m pretty sure Nigerians either resident in Ghana or anywhere around the world more often than not cringe at the mention of cyber fraud also known as 419 in that country. .

As I earlier noted internet fraud is widespread---it pervades both in the advanced and developing world. In 2009 Time reporter Randy James reported that President Obama was searching for ‘yet another White House czar to tackle a pressing public concern.

…” And so on May 29 2009 the president announced a high-level initiative to address the growing problem of computer attacks—against the government, corporations and Individuals—by coordinating the various efforts to fight hackers and other computer criminals under the direction of a coordinator already dubbed the ‘cyber czar,”. Randy reported.

“I know how it feels to have privacy violated because it has happened to me and the people around me,” Mr. Obama said in the announcement.

Around the same time then Defence Secretary Robert Gates told CBS News that: “The country is under cyberattack virtually all the time, every day.” He said Pentagon at the time planned to quadruple the ranks of its cyber security experts due to the insurgence.

Methods employed by cybercriminals
They rummage and rampage websites.One method used to commit such crimes is sending emails with a ‘seemingly legitimate link, but once clicked, the link installs a virus on the victims’computer that records keystrokes to enable the acquisition of passwords, account numbers, and emails sent to others’, internet specialists have observed.

Cybersecurity experts say most times all of the information obtained from these types of attacks are collected by the criminal and put up for sale. This kind of attack which is commonly referred to as phishing is frequently used by the scammers according to HSNO a forensic firm based in the United States.

Are our neighbours ‘noisy’ if so, how do you deal with them without straining the cordial relationship that exists between the two nations’?

The Nigeria community in Ghana is growing exponentially. The population is not only concentrated in Accra the capital city. Today, Nigerians are settling in cities like Kumasi, Takoradi, Tamale, Cape Coast , Bolga, Ho, Koforidua , Sunyani and various towns across the nation. They’re in banking, mining, farming, fishing, quarrying, aviation, telecommunication and many sectors. More and more Nigerians are today educating their children and wards in Ghana.

Sometime in 2010, the Nigerian population in Ghana was said to be hovering around 4 million. Seven years on, it’s most likely, that figure could double as the influx continues. Indeed they’re neighbours we cannot sever ties with. We need them much as they need us. Therefore let’s work together to smoke out the moles from the holes.

[Audio] 'Because of Mr Akudugu you want to destroy me, It wo...
43 minutes ago