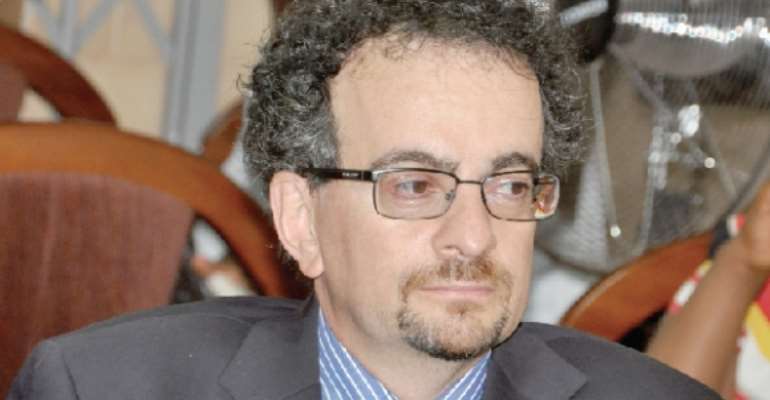 By Dr. Michael J.K. Bokor
Thursday, Dec.. 29, 2016
Folks, it is no secret that officials representing their countries' interests in other countries worldwide should know where to step so they don't undermine their own integrity, endanger bilateral or multilateral relations, or bring the profession of diplomacy into disrepute.

All over the world, those sent out by their countries to do the work of diplomacy act cautiously and speak with decency to "grow" the relations between their countries and those hosting them. The essence of diplomatic work is to cement relationships for mutual benefits, regardless of whether the foreign diplomat is from a more powerful or better-positioned country.

Over the few years, the British High Commissioner in Ghana (Jon Benjamin) has been in the news for over-stepping bounds. We don't want to bore anybody by recounting all the instances, but we can say with confidence that his public posturing and utterances have cast much slur on the business of diplomacy.

He seems to be acting and speaking with so much stinking impunity as to make me wonder whether he is a well-bred diplomat or a jester sent to Ghana by Britain to muddy the waters. Long before the December 7 elections, he had spoken careless and acted irrationally to betray his or Britain's political interests in Ghana. Although he aroused much anger and disdain, the Ghanaian Government didn't act against him.

He is now out again, drawing needless attention to himself and clearly painting himself as a "persona non grata" in Ghana. He has been reported as cracking an irritating joke about the Harmattan season and wondering whether anybody has "inaugurated" the season. (See http://www.ghanaweb.com/GhanaHomePage/NewsArchive/Jon-Benjamin-reacts-to-Mahama-jabbing-tweet-497485).

And his stupid attempt at damage control annoys me all the more. That is the most stupid "joke" to have come from someone in diplomacy. He comes across as ignorant and unfit for the role assigned him in Ghana. A reasonable person (more so a diplomat) will know that Harmattan is a natural phenomenon that doesn't need any human being's intervention or whatever to make its presence felt. And it is perennial in our part of the world.

By turning it into this kind of stupid joke, the British Ambassador has not only exhibited maximum waywardness but he has also succeeded in disgracing the British Establishment. Is that the kind of person to represent Britain's interest in Ghana, the prize former colony that it boasts of as a classic example of a respectable entity endowed with natural resources and respectable citizens whose contributions to global civilization is unquestionable? A country that gave the world Kofi Annan as the Secretary-General of the United Nations? And a country that has contributed a lot more to global ventures?

I am highly disappointed in this weak-minded Jon Benjamin representing Britain's interest in Ghana. Of all the "brains" in the diplomatic service of Britain, is this the one to place in Ghana? In effect, I say without any reservation that this Jon Benjamin has outlived his "uselessness" (not "usefulness" because he hasn't in any way been useful to Ghana all these years) and must be kicked out. All that remains now is for the Ghanaian officialdom to lodge a formal complaint for him to be removed from Ghana. I will strongly support such a move.

The truth is that all his predecessors dealt in a decorous manner with Ghana and abstained from the nonsense that he has focused on. I wonder what his accomplishments in Ghana are to warrant his haughtiness. What at all has this Jon Benjamin used his presence in Ghana to get Britain to do for Ghana? And what makes him feel so bold as to fool about?

Let's face it. Nowhere else in the world but Ghana will a diplomat who has stooped so low behave this way and still strut the landscape as a representative of his/her country. Are our Ghanaian authorities so unconcerned or cowardly to act against him?

It is not as if there are no circumstances in countries to be openly ridiculed. But common sense and the tenets of diplomacy demand that those invested with diplomatic responsibilities know how to act so they don't childishly and foolishly latch on to them to sink so low as this Jon Benjamin has done.

He is the most unthinking representative of Britain in Ghana ever since the two countries established formal diplomatic relations after Ghana's independence on March 6, 1957.

I have no regrets for damning him this way. Were I to be in Ghana to get close to him, I will demonstrate my anger in a more pointed manner. Such a nuisance won't help us and must be kicked out. He is not a diplomat and shouldn't be allowed to operate in Ghana as such. At best, he is an agent of the British MI 6 provoking the Ghanaian Establishment so Britain can unleash something on the country.

I don't know why the British appointing authorities haven't reacted so far on the quiet to either get him back on track to do "diplomacy" or why they have chosen to look on unconcerned while he misbehaves. It is disgraceful to have this "foolish wit" (thanks to William Shakespeare's classification of his kind as such, not as a "witty fool") in Ghana doing "diplomacy" for Britain in this 21st century. He is ruffling too many feathers.