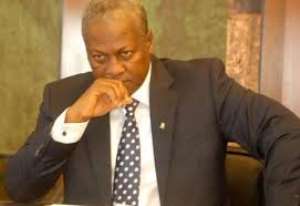 The President of the Republic of Ghana John Dramani Mahama had in the wake of several strikes from several sectors of the economy had indicated that he was like the proverbial goat who was dead and feared no knife! He was quickly christened as the dead-goat President. The President publicly said he has hard thick skin and did not care about the massive corruption and unemployment in his tenure as President.

He justified it by dancing to a local music titled: “Yentie Obia” meaning we won’t listen to anybody anytime he attended social programmes and had the opportunity to dance. When even the performances of students from the various examinations of the Junior High School to Senior High Schools brought about high rate of school drop outs this man still maintained that he was a dead goat! Why the President will always refer to himself as a goat that is dead is only known to him. If I am to guess I will perhaps say maybe he slaughtered some goats to become President!

I initially wanted to title this article: “When a dead goat is President” when I noticed that the President had resurrected from dead goat to living goat!

It took a sustained strike action from Doctors within the public sector to get the President to resurrect after several months of proudly enjoying the title “Mr. Dead Goat”. The doctors had to elevate their strike from disabling OPD services to Emergency services with a threat of resigning en bloc if negotiations about their conditions of service as doctors were not concluded.

The government had bolted away from the negotiation table and took to leaking draft proposals to the public through a Presidential Staffer, Stan Dogbe, on his facebook wall. Whilst this was obviously a case of bad faith and break in confidence, the government and its appointees rather resorted to insulting the doctors, accusing them wrongly and threatening to either sack or deny them their wages. The glaring intimidation from the government and it appointees never deterred the doctors. Some of the doctors were sacked in mysterious circumstances in some hospitals in the Brong- Ahafo Region.

Whilst precious lives were been lost as a result of the dead goat attitude of President Mahama, he kept releasing unkind words to the doctors describing the strike as illegal in some instances. The President didn’t see the leaks of draft proposals by his appointees to be illegal. Whilst innocent Ghanaians were dying as a consequent of the doctor’s strike, the government was still talking tough and daring the doctors. A confirmation that the government was indeed a death goat and didn’t care about the several lost lives.

It was refreshing to read a statement from the Presidential Candidate of the New Patriotic Party calling on the Doctors to rescind their decision to resign en bloc and to return to the hospitals to save lives as negotiations continue.

May God touch the heart of the President now that he has resurrected so that he will do things right to salvage the country which has damaged beyond repairs economically.