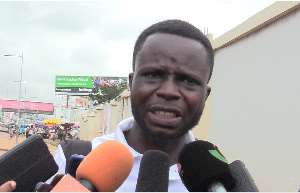 The Voiceless Media can report that only 11 out of 100,000 supposed NABCO Trainees turned out at the Obra Spot at Circle in Accra for the demonstration against the government.

The demonstration was called at the instance of a fake group calling itself the Coalition of Nabco Trainees led by one Nana Barima.

According to Nana Barima, who spoke to the media at the Obra Spot, he was expecting 1,000 Nabco Trainees to turn out for the demonstration but five hours into the stipulated demonstration time of 7am, only seven people were seen at the venue.

The leadership of the Coalition of Nabco Trainees were left with no option but to call off the demonstration in the face of deep embarrassment.

Speaking to The Voiceless Media in several interviews however, some NABCO beneficiaries said they boycotted the alleged demonstration because they realised some persons who were not beneficiaries of NABCO, wanted to use them to discredit the Managers of NABCO and the government hence their decision to stay away from what they described as 'Needless demonstration'.

In another development, some beneficiaries of the NABCO indicated that their March and April stipends got paid to them this month with the hope of getting the Stipend of May soon and wonder what the motive for the demonstration was.

Speaking to the Voiceless Media, the Managers of Nabco indicated that some trainees had not received their stipends for some months due to technical mistakes those few beneficiaries committed which is being addressed by the relevant department at the NABCO.

It must be stated that the Coalition of Concerned Nabco Trainees has been issuing all sorts of baseless allegations against the scheme and also failed to use the right Corporate procedures to address such concerns but always jump from one radio station to the other to issue threats and attempts to incite the public against the government. It has always been suspected that members of the Coalition of NABCO Trainees were professional liars and demonstrators recruited by hidden hands to create false alarm for mischievous reasons.

It is left to be seen what Nana Barima and his paymasters will do after this latest embarrassment that the Coalition suffered at the Obra Sport in Accra.

I sold my virginity to a fetish priest for money, now my vag...
16 minutes ago

Economic crisis: We are all in this together and we intend t...
31 minutes ago