Quranic Interpretation / Sermons In Ramadan For Peace In Ghana 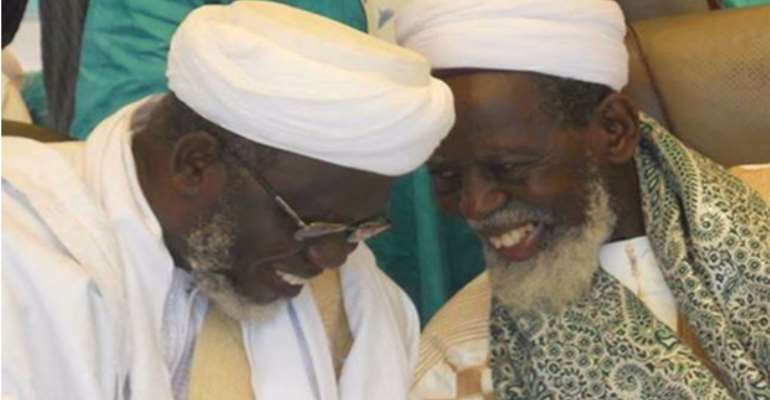 'May the holy month of the revelation of the Holy Quran usher in peace, happiness and prosperity for Ghana and all nations of the world'

After ushering in the month-long Ramadan fast, on June 28 in Ghana, the National Chief Imam Sheikh Usman Nuhu Sharubutu has begun the annual (tafsir) Quran reading, translation and interpretation on Wednesday 2nd July, in the Central Mosque at Abossey Okai Accra.

The Tafsir program by the Chief Imam will go side by side with similar programs in almost all major mosques throughout the country. As usual a large number of Muslims of all levels in the nation will go early to find seating space in mosques to listen to teachings and directions of Islam in accordance with the Quran and the traditions of the prophet Mohammed PBH.

'Ramadan Kareem' come with it the opportunity for Muslims to devote the entire month for worship and devotion to Islam. Almost all able bodied men and women led by Imams will stay clear from food, water and sexual acts with their wives from dawn to dusk. This exercise is meant to teach Muslims acts of sacrifice; self denial and ways of getting to know how the poor feels when they are hungry and thirsty and how to get closer to God.

The National Chief Imam and Imams throughout Ghana will thank God for the relative peace prevailing in Ghana and pray for calmness, fellow feeling and understanding in the country. prayers will definitely be said for all political and traditional leaders and subjects irrespective of their religious, ethnic and political leanings.

Apart from this, Ramadan is also the month in which individuals and organizations do devote parts of their earnings to provide food to the needy people especially the young and old. In many homes in Ghana especially in the Muslim communities, food is prepared and sent to mosques in the evenings and at dawn for the benefit of large numbers of Muslims who go to pray. Large quantities of Fruits are also shared freely during this month.

In all these some of the monies used in buying food for the Muslims come from donors from Muslim countries through local Islamic civil society organizations some of which are direct aid based in Madina Accra, Islamic Council For Development And Humanitarian Services (ICODEHS), Ihsan and Al-Hida to mention but a few. May Allah Almighty shower his blessings on all these people? Of all the goodness done to people in the month of Ramadan none is as difficult as the act of some Muslim homes where food and beverages are prepared for large number of Muslims who are engaged in fasting.

A visit to some Muslim homes in Muslim communities in Nima, Maamobi, Sukura and other Muslims throughout Ghana would reveal Muslims young and old especially the needy trooping in there to break their fast in the evenings. In the home of the National Chief Imam at Fadama Accra, the number of people who converge to eat daily during the Ramadan months is always very large. People from far and near go to eat in the imam's house at Fadama. Indeed it is not only during the Ramadan that people go to eat in the home of the Chief Imam.

Indeed large amount of food is consumed in the home every day from morning till night. What is needed is for charitable donors to intensify their support for the National Chief Imam's household with more food items such as rice, sugar, yams, eggs, beverages and many more. It's no secret that some well meaning people in government and private sectors have been donating food and other items to the National Chief Imam and other Imams in Ghana throughout the year especially during the Ramadan for the benefit of the poor.

I am happy to announce that the Ministry of Gender, Children and Social Protection intends to provide food to the aged and children during this year's Ramadan month. The donation will be made to the beneficiaries through the National Chief Imam by the Minister, Nana Oye Lithur. It is our prayer that this gesture becomes an annual affair. We are in the process of selecting the beneficiaries who would be the needy in the society.

As usual mosques throughout the country are getting full again with young men and women going for the five daily prayers and evening long prayers. We thank Allah that the young men and women have cut down on their unproductive outings and leisure activities. We thank Allah that Most of them show little interest in the World Cup matches being staged in Brazil on television at in the evenings and night in favor of Islamic religious duties.

Their way of dressing has also changed for the better since most of the young men appear in long robes instead of trousers that expose their panties. Most of them obey the order to put off their phones during the long prayers and worship at night. The young women also appear in veils and long dresses. Almost all imams especially the leading imams like the National Chief Imam are happy with this situation and consider it to be good for the image of Muslims and the nation. It is our hope that the young-men and women would remain glued to Islamic principles they have chosen for themselves by trooping to mosques and praying regularly after the Ramadan month.